Ben and Keith are The Two Gay Geeks

Ben and Keith are The Two Gay Geeks behind TG Geeks Webcast, where our motto is “You name it, We talk about it.” ®
Our website, tggeeks.com, is headquarters for our Webcast as well as articles and reviews on a variety of subjects.
We cover all aspects of Geek-dom and Nerd-ery. As our motto implies, we talk about almost anything. We do tend to talk more about the Sci Fi, Comics, Film, Horror, and Genre, but we have been known to talk about Opera and Disneyland on occasion.
We have become passionate about supporting Independent Creators whether that is film, comics, music, or authors we are always open to talking with creators of all types.
So, come along and join our wildest ride in the podosphere. 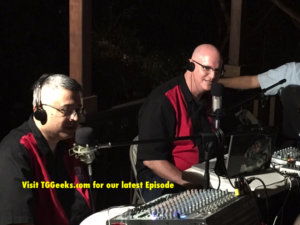 Keith Lane
TG Geeks Sound Engineer, Producer, Commentator, Website Administrator, and purveyor of puns
Keith has always been a lover of Science Fiction and it was this love of sci-fi, especially Doctor Who, that introduced him to Ben and sealed the deal for their relationship 23 years ago.
Besides Science Fiction, Keith enjoys Opera, photography, and cooking.
Keith comes to this website and TG Geeks webcast from his previous involvement with Slice of Sci-Fi where he was a contributor and sometimes script-writer and producer and he is an occasional contributor to Technorama Podcast.
Keith has discovered his voice for the website in Restaurant Reviews and is a much more vocal participant in the podcast albeit insanity based vocalizations.

When Ben received his first iPod he started to explore the wild and wooly world of podcasts. It was then that he discovered Slice Of SciFi and knew this was something that he wanted to do. Then in 2010 he became the co-host of the new podcast Fusion Patrol, and shortly afterwards joined Slice Of SciFi, first as geek commentator and then later as one of the show hosts. Since then he helped start up No Baggage Attached Podcast as well as TG Geeks with his husband, Keith Lane.

Ben has an unquenchable thirst for a variety of geeky things, especially in the area of science fiction and comic books. As he’s fond of saying, Babylon 5 introduced him to his husband, and it was Doctor Who which sealed the deal!

Ben is also a musician and can sometimes be seen singing with various choral groups in the greater Phoenix valley, as well as sometimes performing as a guitarist for a variety of functions. He is also an amateur photographer, and whenever the opportunity allows for it, can be seen with his husband walking around Disneyland.