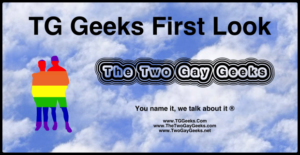 The Two Gay Geeks have received a Press Release from good friend of the show, Hamish Downie. He has a new feature film that he wrapped in 4 days. The Press Release is in a different format than most Press Releases since some of you know him from our interview and his comments on our show. With that in mind he writes in a friendly manner as to friends. You are the first to get a look at the Press Release and photos from the shoot.

Some of you might know me, Hamish Downie, for my work, such as my short films, music videos and manga – but, I’m sure that most of you know me for my comments of the podcast, and for that vicious cycle of mutual appreciation that sometimes happens in the feedback section. As you can see, Ben and Keith have been my biggest champions, as I’m sure they have been for many of you, and that’s why I’ve chosen to give the first “First Look” at my debut feature film “Kodokushi” to them.
“Kodokushi” is the story of a lesbian couple in Japan who go into a downward spiral when one gets sick and the other loses her job.

As you might have picked up from the title, this is a mostly Japanese language film (although it does feature English, French and Italian in sections). I’m hoping to reproduce the feeling of living and working in the international community in Japan is like. The title roughly translates as “The Lonely Death”, which may end up being the English title. As you can probably guess by the title, and my work to date, this is a fairly dark subject matter. But, I hope that after watching the film, the audience will feel both enlightened, and as if they’ve had a beautiful and powerful experience.

In order to achieve this, I’ve enlisted the two best actors I know, Qyoko Kudo and Tomoko Hayakawa. If you want to know why a gay man is telling a lesbian story, this is why – number one, these are the best actors I know. Number two – this is something that affects every member of the LGBT and broader community in Japan. Through telling each other’s stories, I hope that we can bridge the gap that’s developed recently between the different letters in our community.

The film stars Qyoko Kudo, who American audiences might know from “The Wolverine” (she played the mother of Hugh Jackaman’s love interest) and “Babel”. And also stars Tomoko Hayakawa, who international audiences might know from when she presented NHK World’s “Great Gear”, and featured in the TV Tokyo mini-series “Nazo no tenkôsei”. They also starred together in my award-winning short film “Silence”, which was of course featured on this website and podcast. And Qyoko also features in my multi-award winning short film “An American Piano” (now on Amazon – please follow the links on the website: https://www.amazon.com/dp/B071F95T4X).

Like “Silence”, Paul Leeming (now becoming known for his LUTs – https://www.leeminglutone.com/) is once again on DP duty, and as you can see from the poster still, he has created some incredible images for the film.

Outside of the main cast, we have assembled some great new talent locally in Osaka. Also, we have Elan Rie (who you might remember from my short “Lost Hope”) and Sho Kubota, another up-and-coming comic, who both featured in theatre productions at the Yoshimoto Theatre (the breeding ground for famous comedians in Japan – something akin to Second City in the USA). The film also features one of the only female Noh Performers in Japan, Asuka Goto.

Sorry for burying the lead, but here it is, yes indeed, we shot this film in four days (including half a day for rehearsals). After taking “An American Piano to Cannes (it was also at TIFF), Paul and I spent a long time searching for the right idea to exploit the knowledge we’d gained from meeting the sales agents at the market. It was a long process to find the right idea, but I believe we’ve managed to do just that. The original plan was for Paul to direct his debut feature in Holland. Then I got the bright idea to make another feature film under the radar while we were preparing for his film. I’d read Dov Simens (of Two Day Film School fame) article on making your first feature in two days (real time – all improv), and I was very inspired. We ended up making it in four days, however, we did keep to the spirit of the original idea, and do mostly improv (although there was a no-dialogue script). We also kept mostly to the Dogma 95 principles of mostly natural lighting. Plus, all the locations were within 200 metres of my apartment. I am by no means the smartest or best director, however, with a great story, and by surrounding myself with incredibly smart and talented people, we were all able to pull off this monumental achievement.

Now, we’re looking forward to starting the editing process (once we all start feeling like humans again, and not the walking dead), and also, I’m really looking forward to hearing what composer Thea Hilberts (who did the music for “Pieces of 8” and “Silence”) comes up with.

I hope that you will all come on this journey with us.

Thanks again to Ben and Keith, the two gay geeks, for supporting all of our dreams.