The weekend may belong to Black Panther, but if you’re looking for a PG-rated movie Early Man from Writer/Director Nick Park has the stop-action claymation sports comedy you’ve been waiting on.

Set among prehistoric predators and a still-evolving Earth, Early Man pits Stone Age Dug, his sidekick Hognob and his tribe against Bronze Age invader, Lord Nooth, in the battle over their home. Dug and his friends just want to return to their beloved valley and live in peace. Lord Nooth craves bronze and intends to mine the valley for bronze ore.

To save their home, Dug and his Stone Age tribemates must master and then beat Lord Nooth’s champions in the “sacred game.” With all due alternate history hilarity, this clash of the ages will be settled…on an athletic field.

This is a coming of age story…literally.

Prehistoric Dug (Eddie Redmayne) wants an adventure. He likes to think outside the box. Despite evidence to the contrary, he believes his rabbit-hunting tribe is capable of more. Like hunting a mammoth…because “sure we can.”

Dug and Hognob in EARLY MAN. Photo courtesy of Aardman.

The tribe’s ensuing shenanigans – don’t worry they stuck with rabbits – are brought to an abrupt halt by invading machines that drive them from the safety of their valley. I know this all sounds heavy but in the tradition of Wallace and Gromit, Park’s script is witty and riddled with British-style humor.

Early Man is made of high irony and gags. It follows this group on their lighthearted journey of self-discovery and stays the course with hilarious asides and ridiculous application of the ludicrous to the development of man. You can almost cue the song,  “You’re The Best Around” to a few scenes and it works juuuust fine.

I laughed more than expected and left entertained.

The story premise may not be that unique but bringing a sports-theme to the dawn of man is in-and-of-itself hilarious. By the time you hear the live commentators calling the “sacred game,” you’ll have laughingly agreed to suspend reality.

Watching Dug and his friends learn to work together and be a team in a surreal environment is the best an underdog movie can offer. It only gets better once city-dweller Goona (Maisie Williams) joins forces with the cavemen.

Early Man is 89 minutes of fun and puns…so many puns and Hognob the scene-stealing wild boar.

Do you like claymation or stop-motion films? Thinking of Seeing Early Man? Let us know! Leave a comment below. 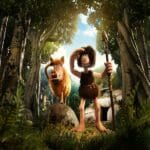