First, this is not a horror movie. The film version of Annihilation can, at best, be classified as a tense sci-fi thriller.

I just felt I needed to get that out of the way. I love horror movies and I consider a broad category of film types to be in the genre. This film, however, is just not one of them. So if you heading out to see this hoping for a horror movie, you’ll likely leave with that need unmet.

Synopsis:  After seeing her husband left a shell of his former self, Lena, biologist and former soldier, volunteers to travel inside a mysterious phenomenon called “The Shimmer” expanding across the American coastline called Area X. She joins the next team with four other women. Once inside, the team travels toward the epicenter and discovers a world of mutated landscape and creatures, as dangerous as it is beautiful, that threatens both their lives, and sanity, along the way.

The film leads in with Lena (Natalie Portman) teaching a class and describing cellular function. We very quickly discover that she’s detached and withdrawn. Her husband (Oscar Isaac) is missing and presumed dead on his last covert mission. When her husband unexpectedly shows up at their home, he’s barely recognizable and things swiftly go downhill.

One moment, Lena’s rushing her violently ill husband to the hospital and the next she’s waking in a small room that’s clearly located in some secret military facility. Lena’s confronted by Dr. Ventress (Jennifer Jason Leigh) and soon comes to understand her husband’s role in a secret military mission and the cost to himself and the continued danger to everyone else.

Shortly thereafter, she meets Anya Thorensen (Gina Rodriguez), Josie Radek (Tessa Thompson), Cass (Tuva Novotny), and learns they’re the team slated to head out in search of answers next. The ladies also inadvertently clue her in on exactly how unlikely it is they return from this mission intact, or at all.

Intent on finding a way to save her husband, and figure out what happened to him, Lena still chooses to head into The Shimmer.

From there on out, the story shifts between the past an present in a way that’s deceptively simple. The incomprehensible becomes tangible as the threads weaving strange events happening within The Shimmer and the swiftly unraveling expedition team together.

With an increasing sense of dread (and an inexplicable habit of the team members to drop their guard) Annihilation drags this group through increasingly violently encounters. One by one the women fall prey to their own demons-almost faster than their surroundings can come at them.

After that, consider all bets to be off because this is a film written and directed by Alex Garland so things are bound to get well, weird.

I stayed dialed into the story almost straight through to the end. It was moody, manipulative, bizarre and intense right up until the height of the film when it all tapered off for me. There were so many opportunities for scares and horrific moments that turned instead towards building tension and twisted suspense. It’s not a bad thing, just takes the film in a different direction.

Garland as fails to carry forward some of the most frightening aspects of VanderMeer’s novels because he doesn’t capitalize on the talent of his actors. There’s only surface development of the expedition team and that makes understanding their motives paper-thin at best. There was plenty of time (in between the madness) to build a deeper connection to them as individuals. With this cast of incredible actors, there was potential for amazing from beginning to end. But other than a few poignant or maniacal episodes, we get nothing.

After all that build up, mayhem and mental damage, the reveal was extremely anticlimactic and far too drawn out. There was just very little payoff given the potential.

Techniques that worked beautifully in Arrival, just fall short of the mark here. The ending didn’t follow through on the promise of the rest of the film but that doesn’t undo what went so enjoyably right.

If anything, Garland’s set the stage to wreak utter havoc should he choose to continue the story.

I am in love with Alex Garland’s vision for “The Shimmer”. The cinematography and look developed for the entire film was just this side of a wicked acid trip. I mean that in the most positive of ways.

Garland’s script is a very, very loose adaptation of the source material. Overall, that’s a good thing. It would be practically impossible to translate the mostly internal nature of the monologue and diary-style into a dynamic film. So, the liberties taken make for a disturbing yet compelling and watchable story arc.

Between the score, the dreamlike quality of the storytelling and Natalie Portman’s disaffected demeanor as narrator, the setting is dead perfect for unraveling the mystery at the heart of Area X.  That being said, Annihilation is a creepy, thrilling, surrealistic film but it still skims the edges of what it could’ve been.

Jeff VanderMeer’s best-selling Southern Reach Trilogy is some of the best science fiction has to offer. It combines elements of the inexplicable, macabre, arcane and horrific. It’s psychological warfare fueled by the human mind’s unrelenting need to know at its best. It left me disturbed and convinced I was seeing things out the corner of my eye for days. It raised the bar for horrific (and weird) sci-fi tales.

If you haven’t given this series a read, add it to your TBR list. It gives a whole new meaning to surreal.

Headed to the movies? In the mood for a suspense thriller? Let us know what you thought of Annihilation! Leave a comment below. 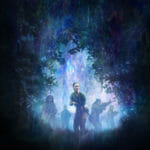