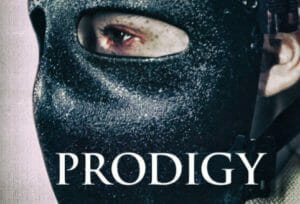 For years it has been said for actors to never work with animals and to never work with children. Let’s discuss the latter. Perhaps it’s because children can be adorably cute causing them to steal the movie. Perhaps there is the fear that they might deliver a disappointing performance that could ruin a film. However, every now and then, something happens where neither of those instances occurs, and we have that with the co-penned/co-directed sci-fi/thriller film by Alex Haughey and Brian Vidal, titled Prodigy.

The film starts out as a series of clips of home movies that deceptively feel disconnected, but in actuality serve as the backstory foundation for our two main characters. This takes us to “present day,” where we see Jimmy Fonda as he is playing a game of chess all by himself, switching from playing one side to the other, and he’s approached by a very “official” looking woman named Olivia, and she has an “assignment” for him. From there he is taken to a very secure facility where we learn that he is a practicing psychologist and that he is brought in to “study” a person named Eleanor, only things are not what they seem for him, as Eleanor, or Ellie as she likes to be called, is kept in a straight jacket and is only a young child. How this disturbs Jimmy is a bit unclear at first, and it’s that which drives him to try to understand this young girl, whom we discover is in there because she is more than just terribly intelligent and insightful. She not only has an uncanny ability to read people through their actions and words, but she has some rather unique “abilities”…. And she murdered her own mother.

For the most part this is a very minimalist production, making this more of a thoughtful science fiction film, which also heightens the tension that it creates as a thriller. While there is a cast of 7 people in this movie, its success rests solely on the acting shoulders of Richard Neil, who plays our psychologist and protagonist Jimmy Fonda, and young Ellie played by Savannah Liles. In a bizarre sense of life mimicking art, Neil has to be able to act opposite Liles in such a way so that she will not steal any scenes from him. While what we see of the character Jimmy in the earliest part of the film feel less than noteworthy, it was when Neil and Liles are in the room together that the fireworks really happen. It almost feels as if Neil was destined to play the part of Jimmy, and based on the performance he gives, should he ever choose to give up acting as a career, he could probably succeed at being a true practicing psychologist. He has a wonderfully warm demeanor and that makes him very trusting and disarming, even when a scene may call for him to take his character to a position of strength and authority.

Liles on the other hand is something of an opposite in both character and performance. Liles plays Ellie in a very cold, almost sociopathic position. While what Neil had to create with the character of Jimmy was unquestionably challenging, for a young child like Liles to bring a character like Ellie to life, and to give her such an intense, laser focused performance is a marvel. However, all one must do is visit her website and read her writings. There is no doubt why she was cast to play such a difficult character. Liles easily shows how intelligent she truly is, so she is clearly a natural to take on such a difficult role as Ellie.

The remaining cast members are largely unremarkable, except perhaps for Jolene Andersen as Olivia. During the course of the film we discover that there is more to what Olivia is trying to accomplish, and Andersen reveals this in a truly steady performance. She never betrays too much at any given time with any of her motivations, including showing signs of vulnerability changing over to game changing strength. If there are any negatives, it is in the remaining 4 characters that serve a variety of roles. Emilio Palame plays Colonel Birch, David Linski is Dr. Keaton, Harvey Johnson is Dr. Werner, and Aral Gribble plays Ryan, a technician. While all four of these actors are capable in their craft, it is in their parts that this film slightly suffers. They don’t come off as characters, but more like caricatures. They are, for the most part, rather two-dimensional. They have virtually no depth to their characters, and many times I was “taken out” of the movie watching experience with some of their scenes. And yet, they are not entirely without redemption, especially with Colonel Birch. He comes off initially as a one-note character with the biggest axe to grind when it comes to young Ellie. He’s not very nice to anyone around him, and his performance gives career military people a bad rap. However, he does get one moment where he shows that he does indeed have a heart. The other unusual character is Dr. Werner. Johnson just doesn’t play him with a sense of cool detachment. At times he almost gives off an aura of mystery about him, suggesting that perhaps there is a backstory to his character as well. If so it is a shame that it didn’t make it into the final cut because the performance that is there borders slightly on eccentric at times to where it almost becomes a distraction. However, these characters are only supporters to the real meat, and that is the performances of both Neil and Liles as Jimmy and Ellie.

Prodigy is a very smart film, and proves once again that those geniuses that slave away as independent creators are in many ways producing better content than what big studios are recycling and releasing. As writers and directors, Alex Haughey and Brian Vidal are showing the world that not only is there still original content being created, but that it is also very good.

Prodigy will be available on March 13 and can now be preordered on iTunes.

Prodigy receives 4 out of 5 Straight Jackets!!!

4 thoughts on “Forget any children of the corn… There is a “Prodigy” in our midst!”