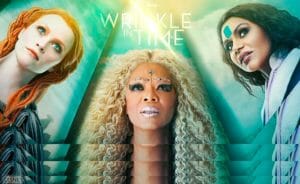 When Disney announced that a new adaptation of the book A Wrinkle In Time for the big screen was underway my initial response was one of apprehension. This would not be the first time this work would be adapted as it had been previously done back in 2003 for television, was co-produced by Walt Disney Television, and was unfortunately greeted with scorn for its treatment of the original story. Now the House with the Mouse would take another stab at this work originally written by Madeleine L’Engle. However, dare I hope that if Disney is going to take a big screen try at the film that perhaps it might help to elevate it into a worthwhile movie?

At the onset of this film we are introduced to Alex Murry, a scientist who is showing his young daughter, Meg, some of the wonders of science specifically in the area of frequencies and physics. We then flash forward to the present day where we see an older Meg spending some one on one time with her terribly bright and precocious brother, Charles Wallace. We then come to realize that Meg is a very miserable person in present day. Her father has mysteriously vanished, and Meg is the subject of bullying. She is pretty much emotionally spiraling downward, but one evening is graced with a visit from a terribly eccentric woman named Mrs. Whatsit (Reese Witherspoon). After saying a few unusual things she bolts off and what we are left with is a series of questions. They are then awarded with a visit the next day to another equally mysterious woman, this time named Mrs. Who (Mindy Kaling). Now that Mrs. Whatsit joins up with them again, along with a larger than life Mrs. Which (Oprah Winfrey), they inform Meg, her brother, and her high school friend Calvin, that they need to go on a mission to rescue Meg’s father. 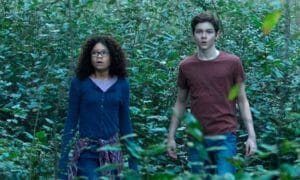 This movie was disappointing. I actually did somewhat like it, but not to the degree I had originally hoped. It’s certainly an improvement over what was made in 2003 for TV, and yet it doesn’t quite materialize into the type of movie I was looking for. Screenwriters Jennifer Lee and Jeff Stockwell did a reasonable job in adapting this book for the big screen, and aside from some important cuts that never made it into the film, what we have is nothing more than a series of positive affirmations, but without any real meat of a story to drive it along. This is also disappointing because the cast is quite good, especially that of the children. Storm Reid has to pretty much be “on” throughout the course of the film as Meg, and even in scenes she shares with Chris Pine (as Dr. Alex Murry), she clearly dominates them. Whether she is playing angry, scared, or sad, she has plenty of conviction in what Meg is supposed to be feeling. Juxtapose that with Calvin, as played by young Australian Levi Miller, and he’s as equally cool as Meg is emotionally on hot and on fire. They have a cute chemistry together, but Miller’s Calvin is totally underused. Early on the film we are told that he is wanted on this quest to save Meg’s father because of his diplomatic skills when speaking, and yet we never see that put into any type of positive use. He does have a few good moments here and there with Meg, and while some of those are extremely positive with the messages they convey, he feels largely irrelevant as a character that is supposed to be very much needed.

Chris Pine, as Alex Murry, is simply delivering a performance that feels as if it were being phoned in. Pine hasn’t exactly shown us any major acting chops with the roles he has taken on lately. He is simply “there.” Then there are the three women, Oprah Winfrey, Reese Witherspoon, and Mindy Kaling. If there were ever any parts that were perfectly cast, it was here. Their deliveries took advantage of some of the personality traces each of these actors is well known for, making their on screen time truly enjoyable. 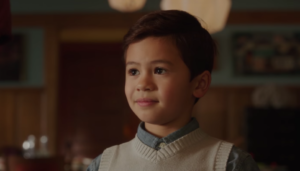 However, the one person who literally steals every scene is young actor Deric McCabe as Charles Wallace, Meg’s younger brother. The ability to play a character as precocious as Charles is difficult without going overboard and making that same character annoying, and yet McCabe strikes that perfect balance, which gives some credence to the fact that Charles is supposed to be a genius. He is the intellectual key of the three children, but also approaches everything with a childlike innocence (the character is supposed to be 5 years old) that made me long for that same time in my own life.

Sadly, with the strength of the majority of this cast, it is not enough to carry this movie. Through them and from them, we receive a fair amount of positive messages about how wonderful each one of us is in the universe, and that the light we each carry within us is a gift to the universe and to each other, but that’s all that this movie is. It’s also jarring in that it shifts from what appears to be a highly intelligent science fiction story regarding astrophysics, to a movie that can at best be considered very spiritual with the three angelic women and the evil that is referred to only as “It.” Alex Murry is specialist of Newtonian physics, while Meg’s mother, Dr. Kate Murry (Gugu Mbatha-Raw) is an expert in the field of Quantum Mechanics. Through the two of them together I would have enjoyed seeing them come up with a Unified Theory that could be used as an explanation for the presence of tesseracts, as well as the existence of our three female Astral-Travelers, as well as the It. Instead it turns from potentially high-minded science to nothing more than just magic, making this story science fantasy, with a stronger emphasis on the fantasy, instead of science fiction.

Again, the messages are great, and if this movie’s target audiences are “tweens” then I might be willing to say that it is a rousing success. However, Disney has a history of making quality movies that speak to different generations and age groups, and A Wrinkle In Time doesn’t do that. Keith and I agreed that movies like The Polar Express deliver their messages in such a manner that I am organically taken back to my days as a child thereby allowing me to see the movie, and for a time the world around me, with childlike wonder, awe, and a sense of magic. However A Wrinkle In Time doesn’t achieve that. Even before the film started we were treated to a short video from director Ava DuVernay encouraging audience members to remember what it was like to be a child and to have that light inside of us. Even then we are encouraged to work at projecting ourselves back to our days as children instead of letting a mature piece of art do that work for us.

A Wrinkle In Time is a movie that has some incredible cinematography and is strong on affirmations, but is weak on story. It’s like eating cake frosting without the cake… And the frosting tastes like sand.

A Wrinkle in Time receives 3 out of 5 tesseracts.