Marketing manager Katherine “Kitty” Katt had just finished a day on jury duty. When she stepped out of the Pueblo Caliente courthouse, all she was thinking about was the work she had to get caught up on. Then her attention was caught by a fight between a couple that looked like it was about to turn ugly. But ugly didn’t even begin to cover it when the “man” suddenly transformed into a huge, winged monster right out of a grade Z science fiction movie and went on a deadly killing spree. In hindsight, Kitty realized she probably should have panicked and run screaming the way everyone around her was doing. Instead she sprinted into action to take down the alien.

“Touched By An Alien” by Gini Koch (one of Tggeeks very own contributors!) is witty, fun, and fast paced. It is packed with action. It’s also packed with mystery and intrigue. Kitty begins with stepping up to save innocent people from a monster but that’s not the end of things, that’s just the beginning.

Kitty quickly learns that aliens are real, they’re sexy and they go around protecting the world from monsters, run by a big bad that is secretly part of the ultimate terrorist group. He isn’t just a monster but has plans for destroying the world. Kitty is not about to let him do so.

Why Kitty? Because he wants her and wants to destroy the people she loves. Plus, Kitty’s real super power is her caring nature. She cares about people whether she knows them or not. She also has a talent for being able to get in the head of the bad guys. This skill enables her to figure out the next move and work on a plan to prevent everyone she cares about from getting hurt. This is the real secret to the excitement of this book. Gini Koch combines mystery and intrigue into an action thriller that is impossible to put down filled with humor and characters that you love.

I willingly admit to crying in this book because not everyone makes it. That is the beauty of the book. It makes you fall in love with everyone Kitty loves. Gini Koch blends humor and pathos with equal measure and makes you genuinely care about all the characters in the book. There are also a ton of pop culture references that will break your geek-o-meter or give it a run for its money. For me, I love those references, they add to the humor.

While Kitty is a good person, she isn’t perfect. Gini is too good a writer to make her perfect. Kitty makes mistakes. She falls in love fast and has a temper. But you love her anyway. She’s a good person protecting her family. And like every person like that protects others, like firemen, police, and soldiers, she isn’t willing to step down and let the people she cares about get hurt. She has a wonderful, supportive loving family which is a breath of fresh air. Her family has a big part in the novels and you’ll love the other characters as much as Kitty.

The same goes for this novel. It isn’t perfect. Sometimes Kitty is telling us what’s going on instead of us just seeing it for ourselves but it works, especially from a first person point of view. I also probably would have loved it almost as much without the sex scenes but I do find they help move the story along and are instrumental in bringing Kitty into her new world. Action and dialogue really move this story. It is fast and incredibly well paced. The characters and action make it feel like a superhero comic book which I think means it would make a great action movie or television show.

I also like that in this book smart people are prized. Yes, the aliens are beautiful but their culture prizes intelligence over looks and doesn’t care about the color of a person’s skin or their sexuality. They have their problems, not the least of which is not being able to lie worth a darn and needing help figuring out what the Big Bad is up to but this is a world I wouldn’t mind living in.
Yes, Kitty is kick ass. That’s why I love her so much I can re-read the book over and over.

You can find the book at these sites: 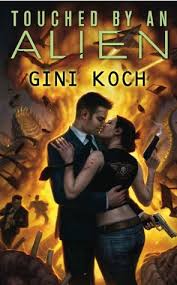