22 years ago, Tomb Raider first led gamers through mystical and dangerous escapades full of puzzles to solve, riddles to unravel, ruins to navigate and traps to escape. It’s main playable character, Lara Croft, is an adrenaline-addicted, tomb raiding, world travelling British archaeologist. Croft is an iconic video game character as well known for her physical appearance as the skills granted her playable character.

I wasn’t a fan of even the idea of a Tomb Raider reboot. After the original franchise – which really doesn’t hold up under re-watches – spent so much energy building its story around Croft’s voluptuous looks and the trappings of Lara Croft “orphaned” heiress than the adventures and skills, I had no faith that restarting this franchise would lead to any greater depth and range in the character.

The first five minutes of the new Tomb Raider completely blows that notion out of the water. We drop into Lara’s life finding her not dripping wet in a gratuitous shower scene but sweaty and fighting in the ring.

The opening sets a quick pace but leaves plenty of time to set the story groundwork, introduce it’s lead character’s personality and then swiftly thrusts the audience right into the mystery around her beloved (an excellent use of flashbacks lay the emotional groundwork for this relationship) father’s, Lord Richard Croft (Dominic West), disappearance and her aimlessness intended to keep her from being forced to face the fact he’s never coming back.

After seven years, Lara finally agrees to declare her father dead; only to be handed the key (yes, literally) to a mystery. What she discovers, sends her halfway around the world looking for answers. Following a clue leads her to Japan and another mysteriously orphan Lu Ren, (Daniel Wu). She ropes him into heading out into treacherous waters in search of what became of their fathers. I feel it must be mentioned, there should always be Daniel Wu in a film that has him in it…seriously, it’s Daniel Wu.

But when they reach their destination, they encounter Mathias Vogel (Walton Goggins) a violent man and bitter man intent on completing a task that could plunge the world into ruins (no pun intended). As a side note, Walton Goggins makes a fantastic villain and his character should’ve been given more permission to be utterly irredeemable. I wanted his backstory something bad.

Roar Uthaug direction grounds Tomb Raider firmly in its gamer roots with rough and tumble action sequences, dangerous stunts and a imagery that consistently calls to mind gameplay. It works to set a quick-paced film with few lulls and plenty of daring. Working with a solid story that does a far better job of grounding this adventure in the science end of science fiction, with dialogue and pockets of humour added by both Vikander and Wu’s performances, Tomb Raider is a solid action adventure movie that entertains and sets this franchise for more interesting tales in the future.

This script is devoid of all of the fantasy elements that set Lara’s adventures apart and despite setting a good basis for understanding how the character’s mind works, it strips the puzzle solving of some of its climatic mystery.

This is a solid cast that wasn’t asked to go nearly far enough at any point in the storyline. There isn’t a single actor in this talented group unable to dig deep and bring nuance and emotion to a role. So, regardless of how well done, not building on the chemistry between all the characters as the various threads of this mystery come together kept this story from feeling consistently dynamic. I wanted more and the director had the time and resources to give it. The ending cliff-hanger opens the door for more character development but this film could’ve upped its storytelling game plenty.

Everything about the greater conspiracy in play is handled in a manner that’s too matter-of-fact. All the unbelievable moments were reserved for watching Lara survive physical calamities after insane mishaps. Don’t get me wrong, the action is impressive and features some unexpected moments but almost every one is preceded by impulsively reckless decisions. A little variety would’ve been helped keep things from feeling predictable.

The greater mystery lacked power and undercut Vogel’s (excellently) menace without the additional supernatural elements that should’ve been part and parcel to solving the riddle at the heart of her father’s reason for going missing.

The fantasy story elements were what I looked forward to reinterpreted most given the campy way the originals dealt with the supernatural.  Watching Lara wrestle with her scepticism and pit her intelligence against the unexplainable would’ve been something to see. I think this cast and director could’ve done something great.

Tomb Raider is a prologue that introduces Lara Croft at the beginning of her life as an adventurer. It’s a smart, fun reset that makes the most of its script and establishes a plausible forward-looking conspiracy and employs a cinematic ‘look and feel’ that sets the bar for future adventures at an achievable height.

Tomb Raider keeps its storyline interesting but lean and mistakenly free of the fantastical. But, as far as creating a three-dimensional protagonist able to anchor a real story and up to the action goes, Alicia Vikander’s Lara Croft hits the ground running (pun intended).

Tomb Raider hits theatres March 16, 2018. Feel like a “summer movie”? Give it a shot then let TGGeeks know what you think! Hit us up in the comments. 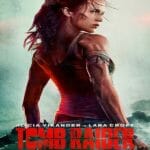