I have said many times that sequels can be a very dangerous thing in the movie industry, and unless you have a long term plan already in place, trying to create a new story to follow-up an already successful beginning is very difficult to achieve. Such is the case with Pacific Rim: Uprising, the sequel to the cult robot vs monster Pacific Rim from 2013 that was directed by Guillermo del Toro (who co-wrote the screenplay), although the new movie sees del Toro serving as Producer and has no credit regarding the writing of this story. Now we have director/co-writer Steven S. DeKnight who is helming this movie, and sadly it is a disappointing turn for his first attempt at something for the big screen. 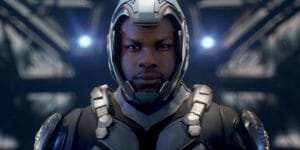 When the film starts it’s some years since Pacific Rim has ended and the world is moving on after humanity’s collective victory over the monsters (Kaiju) that were bent on destroying all mankind. Enter Jake Pentecost (John Boyega), the son of Stacker Pentecost (Idris Elba) who gave his life to destroy the breach where the Kaiju were coming through from their extra-dimensional home to destroy the Earth. Jake is a man who has chosen to emerge from the very long shadow that his late father is continuing to cast and is now making a life as a salvage man for hire, especially regarding items that would fetch a good deal of money on the black market. However his life gets turned upside down when he meets a young girl (Amara Namani played by Cailee Spaeny) who is quite intelligent and extremely resourceful. Through an interesting variation of “it takes a thief”, Jake and Amara find themselves in police custody, but will be released on one condition, and that is if they join the military force that provides Earth’s defense with their giant robots (Jaegers), where Amara becomes a cadet and Jake resumes his previous post as Ranger. While in training, and amidst a series of big business politics, the Kaiju make a surprise return and it is up to Jake, his co-pilot Lambert (Scott Eastwood), and the kids who make up the cadets in training to understand the true nature of this latest Kaiju plot in order to stop it. 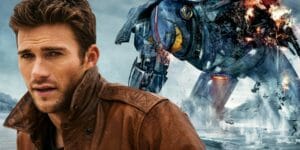 From the very beginning there is a certain artistic and story aesthetic that is missing, and that is del Toro’s vision. While he did produce the film, he had no proper control with this movie in either the story creation or its execution. Despite the fact that the visuals of this film are beyond stunning, one of the things that I loved about Pacific Rim was that it was awesome to just watch it. The look of that film almost made it beautiful as if it were art. Instead much of that look is lost here. There is also a huge problem with the overall story narrative. Right at the beginning of the movie we need to go through the whole introduction process of both Jake and Amara, as well as Lambert later on, but because there is so much background exposition it becomes necessary to accelerate the storytelling process, making the editing and pacing of this film highly inconsistent, and when the Kaiju finally do appear and we start to have the battles the audience has been craving, the manner in which it is played out doesn’t exactly feel linear. The scenes jump all over the place that not only make the action sometimes difficult to follow, but also have the habit of taking you out of the movie watching experience. This is one of the biggest areas where it gets set apart from Pacific Rim, as del Toro understood not only what you want your story to tell, but also how to tell it. The action scenes have a wonderful flow in the first film that allows for the viewer to become extremely emotionally invested with what is happening on the screen. Sadly that doesn’t happen here. The cuts almost have a random feel to them at times that makes it almost impossible for me to even care about these characters or what is happening on the screen. 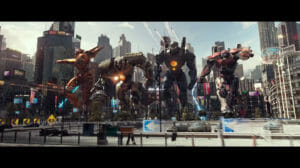 This isn’t to say that the movie is 100% devoid of any merit, as there was one surprise that pleased me greatly regarding this early threat our heroes have to face. I remember turning to Keith and said that I had pretty much figured out the true nature of this movie threat, but when the truth is finally revealed I found it to be both obvious, and yet unexpected. However, a certain story idea that I had been craving for did come to pass, only this time I was unpleasantly surprised by the perpetrator of that idea, so any good surprises that may have come on are nullified. Also the acting isn’t too terribly bad, but there is only so much a person can do with the lines from that mediocre script.

All in all, this film is one big disappointment. It has a few moments here and there, but that is not enough to help keep this movie afloat. Instead it sinks faster than a decapitated Jaeger in the ocean.

Pacific Rim: Uprising only gets 2 out of 5 Kaiju.
————————————————–
Your thoughts and opinions are important to us, so please leave a comment in the section below the article, and if this is your first time visiting please be sure to read the Privacy / Terms and Conditions Of Use.