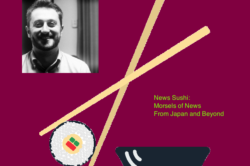 Editor Note: Hamish has another entry for his News Sushi Series. This time he has a title:

A Reflex into the Final Frontier

Look at me, being not once, but three times a lady…

Let’s get right to it…

First, for fans of the Star Trek Misquotes Tumblr… here comes “Off- Duty Banter Bashir (DS9)” for all those of you who want to interact with an anonymous comedian pretending to be a character from a long finished series of Star Trek! And it’s wildly funny!

I don't need a man, I'm a strong independent doctor who knows what he wants.

From the twitter blurb: “I’m here to make jokes and treat patients.. and I’ve just run out of patients… self-proclaimed King of Spacebook, committed bachelor and yes I am quite extra”

And it’s very interactive. So, if you want to ask questions, or be sent on a mission… @BashirFaq is where you need to go! Take it as seriously or not as you like!

From one superfan of DS9 to another… comes Adam J Yeend. The star of my multi award winning short film “An American Piano” (now available on Amazon – follow the links below, hint hint, nudge nudge)! He’s also been on little shows like “Scandal” and the TV movie “Liz and Dick” featuring a star no-one has ever heard of, Lindsey Lohan. He’s also the producer of the horror anthology series “Scary Endings”. If you still claim not to know Adam… well, take a look at his very famous friend…

One of my dearest friends @rachaelmaytaylor is back for a new season of #Marvel’s #JessicaJones in #Netflix! Expect more mystery, action, #femaleempowerment and #TrishTalk. Can’t wait! #actors #bestfriends #superheroes

Not bad, hey? And here is the entry that features Adam in front of the camera, “The Water Rises”. It is the story about Newlyweds Jennifer (Kaitlin Doubleday of the TV show Empire) and Matt (Adam J. Yeend) are enjoying a tropical cruise for their honeymoon when disaster strikes the ship trapping the couple in an elevator at the bowels of the ship. As the elevator sinks, the water rises, and time is running short to for these newlyweds to escape for air!

Follow Adam here @AJYeend – so all of those awesome indie filmmakers that follow this page – get in touch with this great actor toot sweet!

From one talented actor to another, comes a good friend of Adam’s… Ryan Dillon, who produced this great LA noir web series, “The Reflex” which can be watched in any direction:

The Reflex also stars Cerina Vincent, who I’m sure you know from her various roles in horror films like “Cabin Fever”.

“Reflex” is an informal, completely improvised movie making experience. The series is a result of five filmmakers moving to the beach for a week to explore a “what if” scenario of two people meeting by happenstance. What evolved became The Reflex Experience, and experimental series that grew to involve a wonderful supporting cast and composer Aaron J. Goldstein, who improvised the complete score while watching the episodes.

And finally, this awesome ball of energy that comes in the form of the up and coming Osaka comedian Syo Kubota (who also features in “Kodokushi”)…

Let us know what you think. Leave a comment below. If this is your first time visiting please be sure to read the Privacy / Terms and Conditions Of Use.