A time in the not-so-distant future, the world’s given into a fear-drenched silence. No, there isn’t a plague and no the world’s people haven’t finally fallen into muteness in a last-ditch effort to avoid government surveillance…

Humans are being stalked by monsters. If they hear you, they hunt you.

The only way to stay safe is to find a quiet place.

In an excellent display of “show not tell,” we follow a family through a deserted town back towards their mountain stronghold. The only conversation between the family occurs via American Sign Language (ASL) and the silence builds a striking tension that increases until snapping under just the right, and completely tragic, circumstances.

Ten minutes in and you know the rules:

After this first nerve-shredding opening (Day 89), I found myself fully invested. This isn’t so much a post-apocalyptic world as it is a post-genocide-level massacre one.

The more you learn the thinner you nerves are stretched. We return to the family, a year later, living semi-off the grid and preparing what looks to be a safe-room underground. When you see why you’re going to be stunned stupid and all-in with their prepping.

The oldest, their daughter who is deaf, is now closed off, the father slightly detached, and the rest of the family focused on their task. They’re careful to keep silent but go about their day-to-day afraid, but doggedly determined. It’s a simple and straightforward plot from here on out and everything that happens is all the better for it.

John Krasinski plays the father, Emily Blunt plays the mother, and Noah Jupe (Suburbicon), Millicent Simmonds (Wonderstruck), and Cade Woodward play their children. They live in utter silence on a wide stretch of land that will have you thinking “nope, nope, (double) nope” at the first wide shot across the acreage as darkness falls.

This is a dangerous land and without the need of a single trick more obvious than shifting light and ominous quiet, you know something’s just waiting to reach out and snatch the life out of someone. You can feel something is about to go wrong. Krasinski smartly sticks to context clues without overplaying his hand or attempting to be too heavy-handed in guiding the audience.

The cinematography, score, and story progression work together beautifully to build an atmosphere that makes the most of both the story, setting, and cast. This is by no means a passive view experience.

The absolute lack of dialogue forced everyone to rely heavily on visual storytelling and this team (behind and in front of the camera) more than steps up to the plate. You can read their emotions in every line of their body. Speaking glances and touching moments between cast members continuously reel you into both the family’s semi-broken dynamic and the danger urgently pushing them forward. You know what’s wrong between them all and can see how it’s affected each one.

Things are about to get hectic on the homestead and they’re only partially ready. You can almost feel risk factor rising in their situation as the minutes slide past and things become dire.

I don’t want to ruin even a single frame with the slightest hint about what’s driving events to a head. Trust me, avoid spoiler-prone reviews and hit a theater. Have a seat, A Quiet Place is better if you just let it all unfold and play out.

The cast did such a good job of carrying the story silently, I was slightly annoyed at one of the few scenes where there is speaking. I think the entire story progression would’ve been better served had they not broken the silence to have “a moment” between the parents. It’s at almost the height of the film, the audience’s nerves are already on edge and the preceding action sequences set a seriously threatening and tense vibe. No words are necessary. Seriously, not. a. one.

The events that follow are harrowing and would only have been more so on through the climax of the film. Not that I think my feelings needed to be played with further mind you. This is in no way a violence-free film but the sequences are so well done, you’ll be convinced it’s all bloodier than it actually is. Which I always find to be a major plus in a horror-thriller.

If you can convince my mind it’s been dragged through a bloodier mess than it actually witnessed, then you need to make more horror movies. John Krasinski’s first horror movie more than does it’s job telling a story intended to keep you unsettled and on edge.

A Quiet Place is a pretty brilliant horror movie. It never tries too hard, takes itself too seriously, overdoes the drama, and it ends on just the right note. I was captivated from beginning to end.

If you startle easily, cover your eyes when things (literally) go bump in the night, or have a love-hate relationship with monsters, then take a movie buddy but don’t miss A Quiet Place.

Do you have a favorite horror move? Does silence play up the thrills for you? Let us know in the comments! If this is your first time visiting please be sure to read the Privacy / Terms and Conditions Of Use. 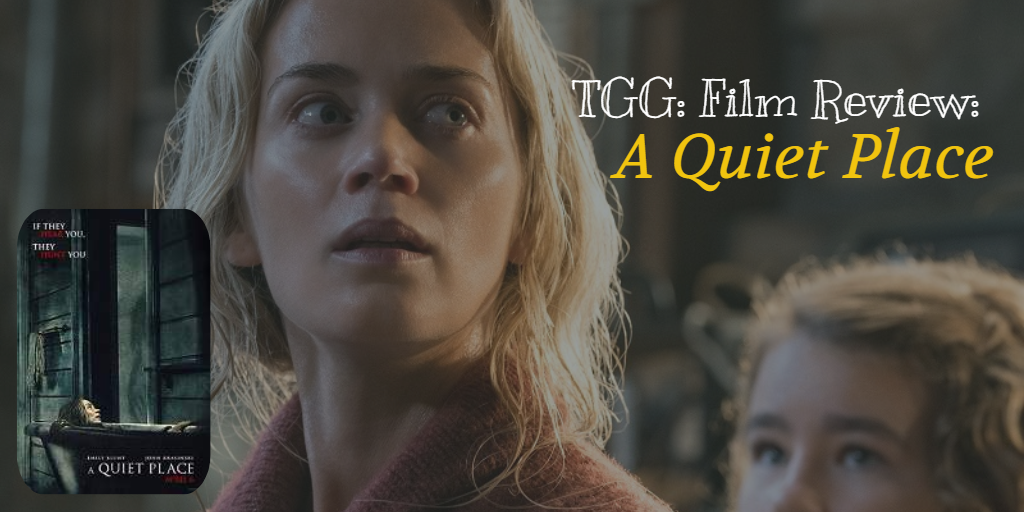