Hamish is back with another News Sushi.
Take it away, Hamish:
After the reign of darkness, here comes the light… or at least the man laughing in the face of terror… as comedy is want to do… or as music leads us like Pan into a new world (albeit temporarily) to a new world.

So, today’s news sushi, takes us to new worlds. And if you haven’t guessed that I use the term “news” very loosely, then the next item will remove all doubt.

For the filmmakers and film fans that follow this blog, you probably know the twitter account “one perfect shot”. But, if you don’t – it’s time you follow it. For myself, I’m still proudest of this shot: 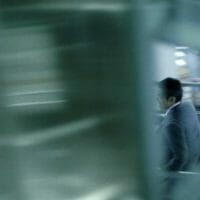 [Description: Zenta Ochi runs down the stairs. From the music video, “Never Let You Down”]

This is from the very first professional shoot I did (and also the first project Paul Leeming and I worked on), the music video for “Never Let You Down” by Robyn Loau. I wanted the video to have a vibe of Jason Bourne running through the backstreets of Tokyo, and I think we achieved this vibe the best in this shot. Paul was in a glass elevator filming Zenta as he ran down the stairs. We achieved the impossible with this shot – to make it look like we had a million dollars, when really, we had very little.

What’s your “one perfect shot”? Come on filmmakers! I know you have one. Tweet us @tggeeks @TheTwoGayGeeks @hamishdownie and we’ll retweet our favourite ones (or all of them). Maybe we’ll even post them here in the next news sushi!

From a music video made by expats in Japan, to a satirical look at the Nationalist who would like us all to leave Japan, “Go Go Second Time Gaijin”.

From the vimeo page:

“Go! Go! Second Time Gaijin” is a mockumentary that focuses on a Caucasian expat living in Japan who, after receiving a blow to the head, wakes up believing that he is a member of an ultranationalist right wing group (the “uyoku dantai”). An idealistic amateur “director” (in the scheme of the mockumentary) is making a documentary film about this odd character because he believes that it will propel his own filmmaking career towards prominence. As the director and his subject’s views begin to diverge though, things begin to fall apart. “Go! Go! Second Time Gaijin” is a story about identity, delusion, myopic nationalism, ascendent conservative trends in Japan’s current government, other big words, and how those beliefs do not accurately reflect the political and social reality of Japanese society. Only the best ingredients for a controversial comedy!

The film was shot by Paul Leeming, and it was directed and stars Robert Nishimura. The film is doing the festival rounds now, so I’ll be sure to let you know when it’s available to watch. Until then, you can follow the film here:

And the director/star here:

‘The Aliens’ is another film doing the festival rounds now. It’s the passion project of actor and former comedian, Byron Yee. I met Byron back in 2014 when Paul and I took our short film “An American Piano” to the Cannes Short Film Corner. There was a /r/filmmakers reddit meet-up, and there I got to meet Byron as well as two French producers. Byron has just executive produced a small indie film that had done well in France called “Bellflower”, and explosive film, which did a lot with a very small budget. Well, he’s done it again with his directorial debut, “The Aliens”. A film that I was lucky enough to be a beta viewer for.

He talked a lot about “The Aliens” at Cannes, but I have to admit, I have been around a lot of talkers in this industry, so I was pleasantly surprised that this film came to fruition.

So, here’s the fruits of his labor:

‘The Aliens’ is about a UFO believer who must choose between the aliens above he has never seen or the mysterious guide who appears in his campsite week after week.

It explores very topical themes of the folks who cross the boarders of Mexico into the USA and also the evergreen topic of “are we alone in the world”.

It’s a beautiful film, and I look forward to sharing it when it’s available for everyone to watch. The lead actress Stephanie Arcila has gone on to work in television regularly, and Byron Yee has won the best actor award at the Roswell Film Festival.

From a film about a nerd in love to a short film which is literally called “Nerds in Love”. It’s a comedy that’s all the things you want in a romantic comedy… it’s funny and it’s charming. And it has lots of heart. And unlike most of the short films in competition at Cannes, it also has a beginning, a middle, and an end. You know, basic storytelling 101. But, I digress, that’s a rant for another day. Oh yes, and Paul and I met Sean at Cannes in 2014. We were part of the Australian contingent. A group of talented filmmakers on the cusp of something big, if only we could get someone to look at us. His film went to a bunch of festivals, and was even picked up by Comedy Central in NZ (but unfortunately not for a series).

Sean Rodrigo directs “Nerds in Love” and it stars some names that Americans won’t recognise. The titular nerd in love is played by rising Australian comic star, Lawrence Leung. And his friend is played by the winner of season 8 of Australian Idol, Stan Walker (and I believe he’s also been a judge of X Factor New Zealand). It’s a pity this wasn’t picked up as a series, because I really would have liked to see more adventures of this trio.

This is the quirky origin story of boy meets girl, and the stupid things we do for love.

From one Australian comedy to another…. here comes “Swinging Safari”, which is a bit like Ang Lee’s “The Ice Storm”, except told through the demented mind that brought you “The Adventures of Priscilla, Queen of the Desert”… Stephan Elliott, who is not at all on social media.

It’s probably never going to make it to America, so try and grab a copy of the DVD when it comes out. It stars Kylie Minogue, Guy Pearce… and for “Silent Hill” fans, Radha Mitchell is also along for the ride.

But, if you can’t wait… then, take a look at where it all began, “The Agreement” on his little youtube page:

Also, if you’ve been waiting for Stephan Elliott to return to drag queens and Sydney Gay life, he recently directed the film version of the popular web series “The Horizon”, currently both Australia’s most viewed online drama series and the most-watched gay web series in the world, with over 37 million views and 99,000 subscribers on YouTube. “Horizon” the film is a remake of the first two seasons and it’s now available on amazon prime:

Logline: In life, love and sex, what we crave is often at odds with who we are.

Sorry, I can’t seem to find a trailer to be able to link directly, but it’s on the amazon page.

And here’s the big finish… it’s a song from a little while ago, but it’s fun and deserves another share. It’s from Hong Kong based Australian DJ… DJ Stonedog. This song was a big hit in Hong Kong for the 2013 pride season and the lyrics are comprised of the song titles of just about every… you guessed it… big gay anthem!

Thanks for spending your Friday with me, that’s all until next time!