It’s Wednesday so obviously Gini’s back taking on another Turner Classic Movies. And once again, it’s RomCom… 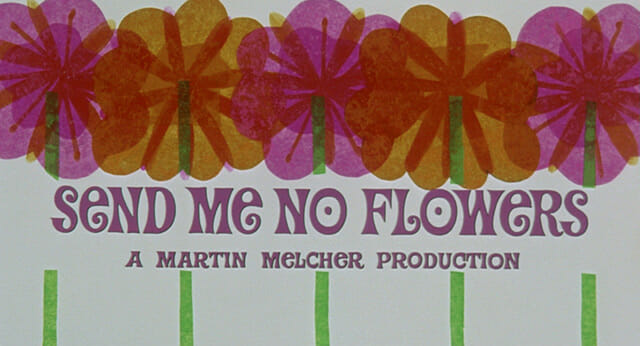 Asking the age-old question: Can Doris Day and Rock Hudson really sell, well, any kind of plot, no matter how offensive, as long as they’re on the screen together?

Answer: Yes, yes they can.

First, we’ve got a Day/Hudson movie about a charming bachelor gaslighting a sweet single gal (Pillow Talk) and now we get hypochondria played for laughs. And yet, it works – in no small part because hypochondria is pretty funny – unless you are a or have to live with a hypochondriac, and then it’s not quite a picnic. But I digress…

As I said in my review of Pillow Talk, Rock Hudson and Doris Day were movie magic. Send Me No Flowers is a sorta sequel to Pillow Talk (and Lover Come Back, which was the second film of the three they made together), in that, in this movie, Rock and Doris are already married, so there’s no courtship going on. Or is there?

George Kimball (Hudson) is a happily married hypochondriac, with an incredibly understanding wife, Judy (Day), and his best friend, Arnold (Tony Randall) lives next door. One day, however, while he’s at the doctor’s office – which is he regularly – George overhears someone else’s diagnosis and believes that he’s only got a couple of weeks to live. 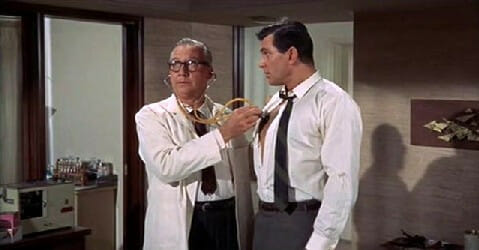 So, George does what any loving husband would do – he sets out to find a second husband for Judy…without telling her that he’s “dying”. And, you guessed it, hilarity ensues.

George also buys cemetery plots from Mr. Akins (Paul Lynde) and, because he’s conscientious, buys three – one for him, one for Jan, and one for her second husband. Though, when questioned by Arnold, George firmly believes that Jan will never have SEX with her second husband. He’ll just be someone to keep her company. George – who has a very passionate relationship with Jan – is choosing to be firmly mindless of the fact that Jan is still a young and vibrant woman. And hilarity ensues.

Jan, of course, has no idea what George is up to, so when an old boyfriend of hers, Bert (Clink Walker), shows up, she’s happy to see him, but only in that “nice to see you after all this time” way. George is, too, however, in the “maybe you’re my replacement” way. So much so that Jan is really wondering what the hell is wrong with Mr. Jealousy George. And George is having issues trying to convince himself that Bert is or is not the right guy to follow his act.

Hilarity is ensuing when the doctor drops by the Kimball household (because when you’re seeing a patient as regularly as he’s seeing George, you become friends) and Jan finds out that George isn’t actually dying. She and the doctor aren’t aware that George doesn’t know he’s not dying, either. So, due to a variety of factors, she thinks George is having an affair.

Nothing George can do or say convinces her otherwise, and Arnold’s advice for how to fix things is the worst advice ever given which, of course, George takes and which, shocker, only makes things worse. 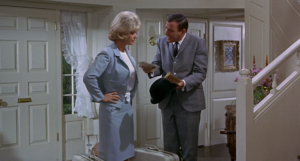 Soon, Jan is really leaving, and George is distraught. And then George discovers he not really dying, and that makes everything worse.

Will hilarity continue to ensue? Will Mr. Akins manage to save the day? Is this a romantic comedy? As I also always ask – what do you think? But it’s a light and rather adorable comedy, and the Day/Hudson chemistry is in full force.

My only real complaint with this movie is Bert. Not that he’s there, but that not enough was done with this character. I would have preferred to go with the idea that Jan is considering rekindling with Bert because George is acting so weird, or maybe even agreeing to give Bert a chance when she finds out that George is “dying”. The Bert causes George issues with his Noble Plan jokes worked, but then were summarily dropped, just like the character. The cheating husband jokes worked, but because of them we really didn’t need Bert. The screenwriters and/or the director agreed – the character just sort of disappears, with no explanation given, and, considering the screen time given to Bert, an explanation would have been nice. This misuse of Bert gives the film a jarring, flung together, put it all in and let the editor sort it out, feeling it really doesn’t deserve.

But, you could do a lot worse than cuddle up with your significant other and watch this movie. The hubs loved it (and is waiting patiently for TCM to air Lover Come Back so we can watch that, too). And, you know, should your Sig-O be a hypochondriac, maybe this will help them realize it. Or at least let you laugh about it.

How do the classic movie duos hold up for you? Who’s your favorite onscreen “couple?” Let us know in the comments. If this is your first time visiting please be sure to read the Privacy / Terms and Conditions Of Use.

The Awful Truth And My Favorite Wife | Old Classics?…Newly Reviewed