Tackling what Turner Classic Movies says is a delightful screwball comedy with 1947’s The Bachelor and the Bobby-Soxer. 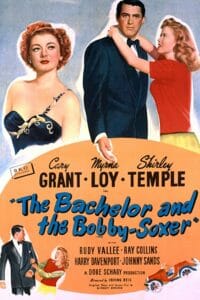 This has to be, in 2018, the most squicky title and the most horrifying pedophiliac TV description ever for a movie that’s not Lolita. The description, per Turner Classic Movies: In order to force a lady killing bachelor to change his ways, a judge sentences the playboy to date the judge’s younger sister because she’s “untouchable”.
I’ll let you digest that one for a moment.

And yet squicky and horrifying (aka Pillow Talk in 2018) it is not. I mean, the hubs and I totally expected squicky and to be ready to write angry letters to Turner Classic Movies – in fact we literally took this film because it sounded so beyond horrifying for this day and age that we assumed we’d be laughing, but for all the wrong reasons. But instead, what we got was an honestly funny screwball comedy, with great acting and a super script. The person who needs an angry letter is the person who wrote TCM’s description of this movie.

Into Judge Turner’s courtroom comes Dick Nugent (Cary Grant), in for a bar fight that he’s the cause of. He arrives late, but with a decent reason, and he’s charming and, as witnesses show up, it’s clear that the only reason he’s caused this fight is that two women he’s dated spotted him in the same place at the same time and got into a cat fight over him, which their current boyfriends also got involved in. The only reason there’s a fight is that, well, Dick is played by Cary Freaking Grant and every woman and any gay men around are indeed going to be fighting over him. 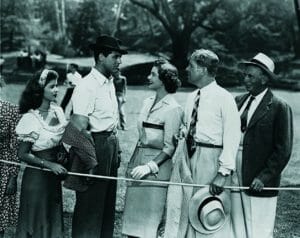 Judge Turner isn’t impressed, though she lets Nugent go, but Uncle Matthew has his eye on Nugent.
Nugent is an artist, going to give a lecture at a school, and, naturally, that school is where Susan goes. She sees him and, like every other woman, falls in love. Only, she’s determined to get him. She drags him into an office to get “an interview”, during which time Nugent is desperately trying to get away since he views her as a child and has zero interest in her and, in fact, isn’t even clear that she’s ready to have him carry her off.

Nugent escapes and Susan decides that he’s invited her up to his apartment. He hasn’t and we’re all clear that he hasn’t, but she’s a delusional teenaged girl. So, she lies to her sister, dresses up like she’s in her 20’s, and gets the 15-year-old doorman (don’t ask, it’s funny) to let her into Nugent’s apartment. She falls asleep on his couch, he comes home, doesn’t see her, gets into his dressing gown, gets his book to read, hears noise, looks up, Susan’s waking up as if they’ve just had sex together – which is, of course, right when the judge, the ADA, and Uncle Matthew slam into Nugent’s apartment.

Uncle Matthew is clear that Susan’s the one driving all the shenanigans, but he’s also clear that Susan is, well, hormonal. If they “separate” her from Nugent, then she’ll spend the rest of her life “as his”, but if they force Nugent on her, then she’ll get over him. That’s that plan, at least. Nugent wants no part of this plan, but he “dates” a 17-year-old or he goes to prison. So he chooses the dating. He is far more creeped out by this than anyone else, which saves this movie. Nugent is horrified, but everyone sees the crazy that Susan’s displaying, and it’s this or a mental institution, so it makes sense.

Susan has a cute boyfriend, Jerry White (Johnny Sands) who, like her, is hella dramatic but in a different way. Nugent spends all his time desperately trying to get those two back together, while noticing that the judge is both attractive and his age, meaning someone he’s actually interested in. The judge is a straight female, so she is also attracted to Nugent. (Seriously, it’s Cary Grant. That the ADA doesn’t switch sides to go after Nugent is the mystery, not that all the women are swooning.)
Does Susan get over it and go back to boys her own age? Do Nugent and the judge get together? Is Uncle Matthew an idiot or the best cupid in the business? As I ask for every screwball comedy – what do you think? But it’s how we get to everyone’s happily ever afters that matter. And we get there hilariously.

As with Bachelor Mother, this is a comedy that still holds up, without any Pillow Talk “well it was the era” explanations needed. It’s funny, it’s sweet, and you really believe all the dynamics. Shirley Temple is, quite frankly, perfect. I honestly didn’t realize that she was worth watching once she wasn’t a little girl anymore, but she certainly is. Not only is she beautiful, but her timing is perfect – and that’s in a movie with Loy and Grant, both of whom have exquisite comedic timing. If you’ve ever been a teenaged girl, parented a teenaged girl, or known a teenaged girl, this movie hits every note right.

Everyone’s good, really, the jokes all land, and the squick factor is for what poor Nugent is forced to do, not what’s being done to Susan.

The only thing wrong with this movie is the description TCM gives it. Ignore that, and give The Bachelor and the Bobby-Soxer a try. Maybe even with the teenaged girl in your life who’s insisting that she and Chris Pratt would really make a super couple.