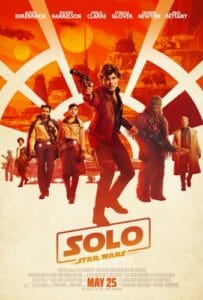 Of all the characters in the Star Wars universe, Han Solo and Chewbacca are my favorites. I love Han’s redemptive arch in Star Wars: A New Hope where he starts out as a smuggler with a mercenary nature and with the exception of Chewbacca, only cares for himself. Or at least that’s the illusion he shows to those around him. Chewbacca is obviously who keeps him grounded and is the one who makes the original deal to let Luke and Obi-Wan on the Millennium Falcon. Despite not knowing precisely what he says, you always know what Chewie is thinking and his presence at Han’s side is part of what I love. So when I saw the trailer, I knew I would like it, especially with the pair together. Given the actors involved, I was excited. The acting lives up to the trailers and it is everything you expect from a Han Solo story, lots of our favorite pair and a story that captures what most fans want the most, Han’s backstory. What it doesn’t have is any surprises, at least for this fan.

The movie begins on Corelia, home world to Han Solo (Alden Ehrenreich) and it begins with him stealing a speeder. We find out that he’s grown up on the streets of Corelia but wants to be a pilot. He has a plan with his friend Qi’ra (Emilia Clarke) to escape. Unsurprisingly, things don’t go as planned for Han or Qi’ra. They end up chased to the airport and must make a quick get away. The pair are separated and so Han has to figure out a way to become a pilot, make money and come back for Qi’ra. 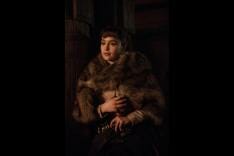 Three years later, he’s still figuring out a way home when he meets a criminal, Beckett (Woody Harrelson). He convinces Beckett to let him join his crew, composed of pilot Rio (Jon Favreau) and Beckett’s right hand, Val (Thandie Newton), meeting his future co-pilot Chewbacca (Joonas Suotamo). The pair are pulled into an operation Beckett is running. Along the way, Han meets Beckett’s boss, Dryden Vos (Paul Bettany) and he encounters Lando Calrissian (Donald Glover). He also becomes entangled with a beautiful woman. And just like in his youth, nothing goes as planned. Han faces challenges and realities unexpected, shaping his future. 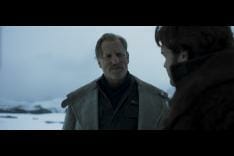 Ultimately, this movie is about exploring the origins of Han Solo, how he met Chewbacca, his exploits and his adventures a decade prior to the events of A New Hope. Not only do we get to meet him in his more idealistic youth but the film also contrasts him with an older criminal and thief Beckett, giving us a sense of who Han becomes. We also get to see the interaction between him and Chewbacca when they meet and learn what led Chewbacca to remain at Han’s side. If you are a fan of Han Solo, this will give you many of the answers you wanted and relies a great deal on the exploits from the previous films that so many of us has heard about re-framed into film. 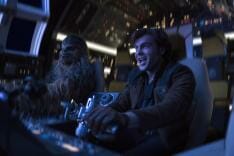 I loved many of the elements in this film. One of the best parts of the film is the dynamic between Han and Chewbacca. This doesn’t work if the actors don’t breathe life into those characters. I especially appreciated that despite being in a fursuit, Joonas Suotamo conveys such emotionality and expression from Chewbacca. His performance is aided by the way Alden Ehrenreich reacts, his portrayal giving meaning and helping the audience to understand their interactions. One would think that translation would make that their dynamic stiff but instead it allows them to embrace the characters. 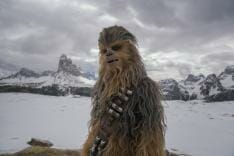 I could rave for days about Donald Glover’s acting. He completely embraces his role as Lando Calrissian. I actually cannot imagine a better fit for a young Lando and his acting was perfect. From the clothes to the ship to his not so faithful robot sidekick L3-37 (Phoebe Waller-Bridge), everything fit what we’ve seen in previous films but added layers to the character. I certainly hope that we get to see more of the character if there are future Han Solo films. The comedic bits between him and L3-37 were hilarious and some of the highlights in the movie. 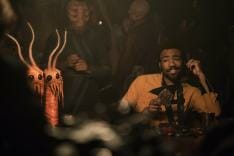 One of the elements I like the best is that the movie is truly a stand alone film. It incorporates the Star Wars universe, giving us landspeeders, spaceships and aliens but in configurations we haven’t seen before now. The world building and visual effects of every ship, including the Millenium Falcon, were brilliant and we got to see new pieces of the universe, including parts of the criminal underground not seen in prior films. Fans will enjoy those aspects while those less familiar with the films will still be able to enjoy the story on it’s own. There are hints of the wider universe but you don’t have to be as familiar to follow Han’s adventures. 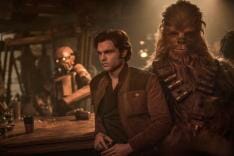 What lost me a bit was the predictable undercurrent. It is exactly everything I expected in a movie about Han Solo and Chewbacca but that meant there were no surprises. Even the romantic elements foreshadow Han’s relationship with Leia. Han always has a thing for the ladies and he’s arrogant. While all of it helps to inform the viewer about Han’s future behavior and how his past has shaped him, the film left me feeling less than satisfied because I gained no new insights. I enjoyed the story I was given, the exploits of Han and his relationship with Chewbacca but was looking for writing with more substance. 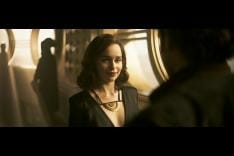 Additionally, shaping Han as idealistic breaks the redemptive cycle of his future self, giving viewers the idea that he’s always been a hero and has never really changed. To me, that fails the character, not allowing the full depths of the character to shine and stripping him of some of his journey in the future. It also teaches a generation that you can’t change who you are. It changes the entire tone of the character and what made me love the character in the first place.

If you loved “The Force Awakens”, this film is much in the same vein. It builds on the events in Han’s life that we already know and gives fans Han’s backstory, many of the elements of his past that we’ve been waiting for. It is completely the story I was expecting and for fans who want that, they will love this movie. If you’re expecting something new, with more substance, you might be disappointed. I know while I loved the characters, especially Chewbacca, and the acting, I was hoping for more.

Rating: 3.5 Millenium Falcons out of 5