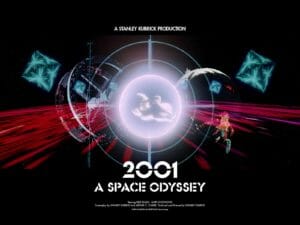 Hard science fiction stories can be very difficult for the big screen. They tend to have a very thoughtful, sometimes even plodding sense of movement. Sadly they also tend to appeal to a very small population of the movie going audience, those being either hard sci-fi geeks or those that are total nerds when it comes to artistic filmmaking. 2001: A Space Odyssey  manages to speak to both of those camps, which is probably why it is the big cult hit of today.

Having gone through a chemical restoration process overseen by director Christopher Nolan, 2001  is a co-venture between writer/director extraordinaire Stanley Kubrick and noted science fiction author Arthur C. Clarke. It tells the tale of the evolution of mankind through the help, or perhaps manipulation, of an extraterrestrial source. Starting off in the time of pre-Neanderthal man, we see four scenes dealing with a tribe of apes and their struggle to survive, including a battle with another tribe over a watering hole. One morning, after having been forced to relocate, they are startled to find an object simply referred to as “the monolith” right next to where they were sleeping. Almost immediately their leader finds a bone, and after staring at for a few moments, suddenly has an epiphany on how best to use it. From there we are catapulted into the year 2001 where space platforms, as well as a very iconic space station wheel orbit the earth, all portrayed like a beautiful ballet set to the music of Johann Strauss’ Blue Danube. And just as space stations can serve as relay stops to other destinations, the movie takes us to the surface of the moon where another monolith has been uncovered.

This is what sets in motion an exploration to the planet Jupiter where we are introduced to a ship called the Discovery, manned by two astronauts (Dave Bowman played by Keir Dullea, and Frank Poole played by Gary Lockwood), three scientists in hibernation sleep, and an artificial intelligent computer named HAL. Unfortunately things don’t go as planned. HAL murders the crew, except for Bowman, who basically gives HAL the computerized equivalent of a lobotomy. It is only then he learns about the mystery of the monolith, and after taking a ship’s pod to explore it, is transported on what can only be described as the most psychedelic trip in cinematic history, where suddenly time and human perspective shift, and in place of Bowman we now see “space baby.” 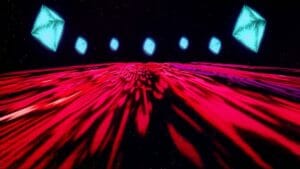 This is one trippy film. I remember seeing it for the first time when I was 14, and I walked out of the theater not fully grasping what I had just watched. Still I would continue to come back again and again to this movie only because of the status it held amongst sci-fi cinephiles. As I continued my investigation into this film I discovered that the screenplay was an original work between Clarke and Kubrick taken from a short story that Clarke had written (titled The Sentinel) and not long after the completion of the film Clarke worked on his own novelized adaptation of the 2001, which actually filled in some of the gaps that are in this film. Now some people complain that this is a very sloooooow movie, and for some I can certainly understand why. Hard science fiction is very thoughtful and is more about ideas than action, and anything that Clarke has a hand in certainly qualifies. His stories aren’t necessarily character driven or even plot driven, but can be considered “idea driven” as it uses people and situations to ponder greater questions.

As for this restored film, Nolan deliberately chose to go “old school” and use a chemical restoration process on the negative instead of using the popular digital method that many filmmakers employ today. Nolan felt that Kubrick’s vision needed to be preserved, and only by using a chemical process to restore the negative would the film be brought back to its original glory, with all of the lighting, colorizations, and shading that Kubrick had intentionally, or perhaps even unintentionally, put into this finished product. This has an interesting effect in that the 70mm print we saw did have a few artifacts on the print, and the colors didn’t exactly pop off of the screen, except for the psychedelic light show at the end that can only be described as disturbingly hypnotic. The rest of the film used very simple colors, which make sense considering that this was released in 1968. Kubrick was determined to make a film that could be considered for its day an accurate vision of the future, and making using of very light, almost sterile settings, seemed like where mankind was heading when it came to future space travel.

The film looked glorious and serves as a tribute to the manner and style of filmmaking that sets Stanley Kubrick apart from so many other film directors. And while it is a very slow moving story, the ideas and questions it presents makes this the ultimate hard science fiction film for both the old, and new generation of fans to ponder, salivate, and possibly even geek out for years to come.

Your opinions are very important to us, so please leave a comment in the section below the article, and if this is your first time visiting please be sure to read the Privacy / Terms and Conditions Of Use.