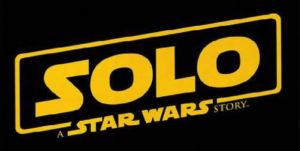 Easily the big breakout character to come out of the Star Wars franchise has been that of Han Solo, the roguish mercenary with a true heart of gold. Granted, much of that popularity can easily be laid at the feet of the actor who brought him to life, that being Harrison Ford. Still, the character of Han has captured people’s imaginations even after all these years later. So when Lucasfilm/Disney finally decided what to do with their space opera franchise, it apparently made only sense to explore the past of this particular pirate, and then guess what happened? They made another good movie!

As with Rogue One  we receive a brief little textual setup explaining how Solo ended up in his “predicament” at the beginning of the movie. We see the rebellious risk taker in his youth and the steps he’ll go through just to stay ahead of the game, only this time it isn’t all flying around on a ship. This Han is significantly younger and we are introduced to him as he is driving a land speeder. He’s on the shipyard planet of Corellia, and he tries to escape from the bad situation he is in. It doesn’t go as planned, which sees him taking some unusual steps to stay alive, including a brief stint working for the Empire. During a chance meeting he stumbles across some smugglers who change his life in a way he never imagined.

I realize that’s not much of a synopsis, but given that I’m going spoiler free here I find that I can’t reveal too much. What I can say is that this movie really feels like a return to what made Star Wars so enjoyable in the first place. I can almost match the beats between this film and A New Hope. Obviously the dynamics of the characters is different thereby creating something that at times feels new and different, but at the same time like it could have been that famous Episode IV of this operatic franchise. Part of what makes this work is the cast, starting with Alden Ehrenreich as Han. This role was the biggest risk to take. This Solo is very green around the gills, but Ehrenreich dug deep and found all of those seeds that would eventually blossom into the pirate we all know and love today This was followed by Donald Glover’s portrayal as Lando Calrissian, and audiences got to see how much of an egotist the character really is. With already established roles such as these two, it’s vitally important to already start to show their development into the characters that we all know and love, but for that to happen there has to be some set of challenges and consequences, especially since Solo messed up a job for a leading crime lord. Because of that he now finds himself on the hook, at least for now. And as green a character Ehrenreich made Han, Glover shows us what type of con man Lando really is. However what really helps to sell what Ehrenreich and Glover do are the story sequences. Jonathan and Lawrence Kasdan have been entrenched in the Star Wars universe for quite some time, so it was an obvious choice to have them write this early story for the franchise, and in doing so placed all of the threads that are there, including a resolution for the ever controversial “Kessell run in less than 12 parsecs” line spoken in A New Hope. However the movie isn’t precisely perfect. It does have some flaws, but they are of a more artistic manner. For some years moviemakers were enamored with the use of the de-saturization of movies and then skewing the overall color palate towards a specific direction, almost as if you were looking at the film through slightly colored lenses. With this film it almost has a blanched look, as if the colors had all lost their strength. I remember with the earlier films, even when the scenery had a blandness to it, what colors were there still managed to pop off of the screen, and I don’t see that happening here. Instead we have scenes that are either too dark or too washed out. Aside from that, what director Ron Howard has managed to put together, after having to re-shoot 70% of the film, is nothing short of amazing, and felt like a very welcome return to what made Star Wars such a fun franchise.

1 thought on “Take a fun, frolic of a ride with “Solo: A Star Wars Story””