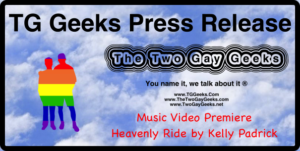 The Two Gay Geeks received a Press Release from our good friends at Chicart Public Relations (ChicartPR). There is a new female driven Music video from Kelly Padrick and directed by our great friend and collaborator, Patricia Chica.
Let’s see the details:

“Heavenly Ride is a sun-soaked frolic in 60’s California surf, with classic guitar riffs and sunshiney vocals to take you down a winding sonic highway,” says Nancy Hess who also sings background vocals on the song.

“I wanted my new single to be a happy song. Heavenly Ride is intended to make you feel good!,” says singer Kelly Padrick.

The gorgeous music video presents a woman played by Kelly Padrick who is enchanted by her lover, played by Italian actor Dario Barbuto, when he comes back home with a surprise that takes them on heavenly ride.

“After spending four years in Los Angeles, I wanted to exploit the grandiose landscapes we have here in Southern California. I was inspired by the Coast; the Sunshine, the Mountains and the Ocean; all the elements that define the true California experience in my fantasies,” says director, producer Patricia Chica. “Heavenly Ride is the perfect Summer tune!,” she adds.

Heavenly Ride will soon start its film festival tour. Find out more on www.KellyPadrick.com and www.facebook.com/FlirtFilms.

Kelly Padrick began writing songs at the age of five. Performing in coffee houses in Rhode Island, she decided to stretch her musical wings and move to NYC. Once she arrived, Kelly got into the independent music scene and began playing local clubs, while collaborating with various musicians in NY and Los Angeles. Kelly has released 7 full length CDs, “Haze”, “Carmine Street”, “Hello My Love”,”Soulmate”, “Dear Love”, “It’s Only Me”, and “On the Line”. She has also released 4 EPs, “The Brooklyn Hours”, “The Kind of Girl”, “Radiance”,and her latest “Fires”. Her music is often cited as haunting and ethereal. “Heavenly Ride” is Kelly Padrick’s 10th music video.
(www.KellyPadrick.com)
Twitter: KellyPadrick

This is my 10th music video collaboration with singer-songwriter Kelly Padrick, whom I’m happy to call a friend. This is our most polished and accomplished production to date. Our first one shot in California. She found me on MySpace in 2006 when I was living in New York city and we have since then made about one video per year. I am so looking forward to continue collaborating with her for many years to come.