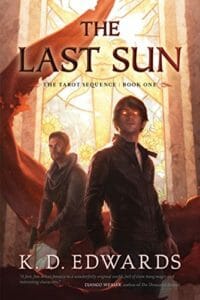 Both Keith and I, here at TG2Studios had received advanced copies of this magical book (no pun intended) titled The Last Sun – The Tarot Sequence | Book One by K.D. Edwards. Now Keith’s review is already out here for people to read, and he did a bang up job at hitting all of the salient points. This has tasked me with a troubling challenge, and that is to write something that doesn’t parrot what he said.

Well having put that out there, it’s no question that this was a book that I loved. To paraphrase the general story, we have a main character named Rune Saint John. He’s the last survivor of fallen Court. He’s royalty, and from the Prologue of the book it is immediately impressed upon us that he’s a Prince of many titles. He’s also a magic user in a modern day world where cars and cell phones are commonplace. And while he’s the last survivor of his court, he’s by no means alone. Royalty of this type are usually mentally bonded to someone who isn’t a magic user, to act as a bodyguard if you will, and his bonded companion is a man named Brand.

The world that Rune and Brand live in is a blended world of science and magic, with the magic users all having come from Atlantis. They have migrated from their homeland to Nantucket and more or less claimed it for their own. Despite living in contemporary times, they still exist as a feudal society, which is how the Sun Throne was brought to an end leaving Rune pretty much an orphan. Now as a young adult, he and Brand hire themselves out as detectives, which for the sake of this book, includes seeking out lost members of other Thrones that are still in existence. It is during the course of one of these cases that they are hired to try to find one such person, but in doing so, stumble across a much bigger and more dangerous mystery, one that has ties to Rune’s childhood, and most definitely has an impact on his future.

I’m not going to lie to you. This was a difficult book to initially get through on the first try. I’ve never enjoyed being thrust into a “universe” as different as this, and yet try to latch on to all of the details that are being presented to me. Edwards throws the reader right into the middle of a job that Rune is on, even tossing in a unique term that, as a first time reader, had absolutely no meaning to me. To say that I found this confusing is something of an understatement. And yet, there was something pulling me in, compelling me to continue on with the reading. That would have been the characters. While I had no idea who people like Rune and Brand are, Edwards does present them in a way that makes them very easy to sort of attach to, all the while not fully understanding what type of emotional relationship as bonded companions these two characters have. There is obviously a sense of responsibility for Rune’s well being on the part of Brand, but everything that these two initially share with each other is purely contentious. But with all of that, there is something likeable about both of them. They both have some snarkiness to them, but in the case of Brand it comes off almost as the id. He’s the unfiltered voice and says things that only the bravest of us would ever deign to say in public, let alone in front of only one other person in a room. THAT is the key to this book! It’s the characters that drew me in, and in coming back to a book because of the characters that were growing on me did the universe building start to take shape. What started off for me as essentially info dump, eventually began to come together as a picture, almost as if I were standing with my nose against a painting by Monét, not making heads or tails out of it, but as I continually stepped backwards, taking more and more of the painting as it entered into my field of view, did the entire work start to make sense. So it is with The Last Sun. By the time I was even halfway through this book did all of the necessary particulars finally make sense, allowing me to then fully understand the world that Rune and Brand inhabit and what makes them tick. We also see that Edwards has clearly thought out this universe by establishing all of the “rules” that this universe operates by. This includes the culture and social structure of all of the Atlanteans we meet, as well as the myriad of other magical beings that Rune must contend with. Not since I read Frank Herbert’s Dune have I encountered such a well thought out and developed universe. However, as the universe unfolds and becomes clearer for me to appreciate, so did my level of appreciation for the characters of Rune and Brand, et al. It’s a rare thing for me to experience characters on a written page to actually take on a life of their own in my head, even to the point when I re-read the Prologue of the book, written from Rune’s point of view (the entire story is told in the First Person POV from Rune), I found myself actually disturbed at what happened to Rune’s court. A fictional story, with characters that don’t truly don’t exist in this universe, have come to life in such a way that I find myself actually empathizing with their plight. That is the power of Edwards’ The Last Sun. He also balances out the characters and their growth with LOTS of plot development. While that may seem to a first time reader like something of a detriment in the first half of the book, it more than pays off in the second half, and when all of the pieces come together in this a way I found that I simply could not put this book down. I cared about the characters and what they were going through. As for the action sequences, they are told with such detail that it became pure theater of the mind, but through it all, it’s the characters that kept me going.

Now I must inform that while this isn’t an obvious plot point of the book, it is at some point revealed that Rune is gay. It’s treated as a non-issue, therefore at no time does it become preachy or in your face. It’s just there as another aspect of Rune’s character makeup as much as the color of his hair or eyes. I do bring this up though because there is one scene that is rather sexual in nature, and yet at no time does it come off as erotica. Instead Edwards writes something that is extremely tender, even beautiful and caring. Through that alone we get a glimpse into who Rune is making him just that more appealing as a character. Even Brand has a special moment, while not sexual in of itself, which peels back the layers that make up who he is, thereby bringing his character into much sharper focus and enabling readers to better appreciate who he is and the mental bonded relationship he has with Rune. 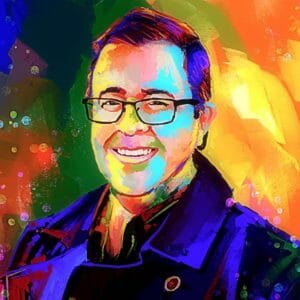 For a first time effort by Edwards, this book is a home run. I do concede that it was difficult to start with, but sticking it out made this one of the most worthwhile reading experiences I’ve had in a very long time. Even as the main plot points came to a resolution and close, I found myself very distressed that this particular story was over. However, that put me in the position of being able to re-read it, and I can attest to the fact that as much as I enjoyed this book the first time, reading it a second gave just that much more reward, which makes what Edwards has done even more astounding. Most novelists take some time before they publish their first big hit. Edwards has done it with his very first book. The Last Sun is a literary jewel!

You can purchase The Last Sun from Amazon by clicking the appropriate widget on the side of the page.

Your opinions are important to us, so please leave a comment in the section below the article, and if this is your first time visiting please be sure to read thePrivacy / Terms and Conditions Of Use.