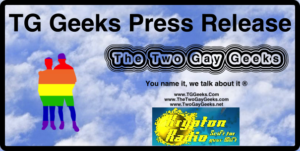 Editors Note: This is a Press Release with forward looking statements and assumptions.

The Two Gay Geeks are very excited to announce that we have signed an agreement with Krypton Radio as part of their weekly lineup.

See below for the particulars:

TGGeeks Webcast will provide regular content (podcasts) to Krypton Radio for broadcast at a time to be determined once the ink is dry.

Krypton Radio is the only full-time geek culture science fiction radio station on 24 hours a day around the clock and around the world currently heard in 165 countries. Krypton radio is a living archive of our time featuring music, radio serials that create the audio environment of the geek-o-sphere.

Krypton Radio started in 2009 as an avenue for online gamers to listen to geeky music while gaming online. They looked for a scifi radio station and came up empty so they created one. Two years later they realized nobody else was doing anything like a scifi radio station so they created Krypton Media Group and opened for business to the netizens. They are now heard by over 50, 000 listeners a month.

Their motto is: It’s Sci-Fi for your Wi-Fi!

Ben and Keith started TGGeeks Webcast on June 20th 2014 after Slice of SciFi ceased regular operations as part of FarPoint Media. Ben and Keith are The Two Gay Geeks behind TG Geeks Webcast, where our motto is “You name it, We talk about it.” ®

Our website is headquarters for our Webcast as well as articles and reviews on a variety of subjects.
We cover all aspects of Geek-dom and Nerd-ery. As our motto implies, we talk about almost anything. We do tend to talk more about the Sci Fi, Comics, Film, Horror, and Genre, but we have been known to talk about Opera and Disneyland from time to time, and even the occasional alcoholic beverage.
We have become passionate about supporting Independent Creators whether that is film, comics, music, or authors, we are always open to talking with creators of all types.

We are looking forward to a long and mutually rewarding relationship with Krypton Media Group and Krypton Radio itself.