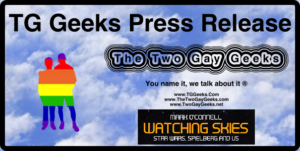 The Two Gay Geeks received this press release directly from author, Mark O’Connell, about his new book to be released in the US in September. The book is already available in the UK.

It looks fascinating because who doesn’t like Star Wars?

Let’s see what this is all about: 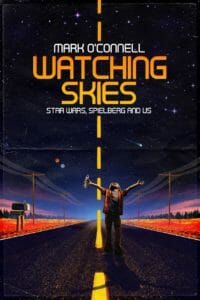 A queer ode to a VHS galaxy not that far, far away

As Solo, Ready Player One and Stranger Things prove the retro might of VHS era cinema, Watching Skies – Star Wars, Spielberg and Us is a universal and affectionate tale about the pop cultural remembrances of a 1980s gay kid.

Like many a child in a 1980s world of VCRs, Reagan and Atari, Mark O’Connell wanted to be one of the kids on the Star Wars toy commercials. Jaws, E.T. The Extra Terrestrial, Raiders of the Lost Ark, Superman and Star Wars weren’t just changing cinema – they were making lasting highways into video stores, toy boxes and childhoods like never before. 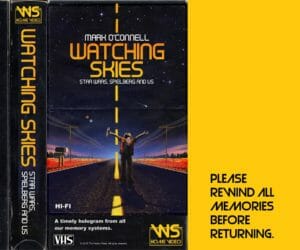 In this energetic tale of a gay Star Wars kid with too many Princess Leia figurines, O’Connell flies a gilded X-Wing through a universe of bedroom remakes of Return of the Jedi, close encounters with early crush Christopher Reeve, a gay honeymoon on Jaws’ Amity Island, and the first gay marriage on the lot at Pinewood Studios.

A unique study on how a rich galaxy of movies shape big and vital cinema to this day, Watching Skies reclaims pop culture’s busiest movie decade for LGBT readers. A love letter to the queer pulses of San Francisco and the shared histories it has with the work of Spielberg and Lucas, Watching Skies is about how a shark, two motherships, some gremlins, ghostbusters, and a man of steel jumped a whole generation to hyperspace.

‘A fantastic personal account of one of the greatest chapters in movie history. An unmitigated delight.’ – Mark Gatiss (Doctor Who, Sherlock)

Mark O’Connell is an award-winning writer and author. As a comedy writer he has written for a wide range of performers, shows, and media. As a warm-witted pop culture pundit, he has guested for The Advocate, OUT, The Times, The Guardian, Pride Life, Beige and across BBC radio and TV. The writer of a marriage column for America’s OUT, shortlisted for the LGBT-minded Polari First Book Prize 2013 and one of the official storytellers of London 2012, Mark now calls San Francisco his second home and gay travel writes. He is the author of Catching Bullets: Memoirs of a Bond Fan and lives in England with his husband. 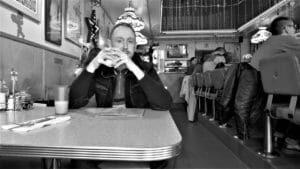