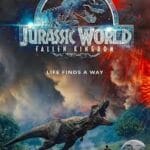 I’ve loved the Jurassic Park movies since the original. The idea of dinosaurs makes the little kid in me clap with excitement. I loved the sequel Jurassic World and thought Chris Pratt was a worthy successor to Sam Neil. After seeing the trailer with Jeff Goldblum, I was looking forward to this second in the series, the prospect of seeing it filling me with excitement. While it is not perfect, the film has tons of dinosaurs, enough action to keep you on the edge of your seat, and explores the moral questions around cloning animals for profit. They also bring in some elements from Jurassic Park which develops more tie in to the original movie.

It’s been three years since the luxury park was destroyed. Isle Nubar sits abandoned by humans with the dinosaurs surviving in the wild. When a volcano on the island threatens the dinosaurs, humans debate helping them. Claire (Bryce Dallas Howard) fights to save the dinosaurs but the government resists, not wanting to interfere on private land. A former partner to Hammond, Benjamin Lockwood (James Cromwell) along with his assistant Eli Mills (Rafe Spalls) convince Claire to help them save the animals. Claire recruits Owen (Chris Pratt) to help her along with two of her friends from the Dinosaur Protection Group, Dr. Zia Rodriguez (Daniella Pineda) and IT technician Franklin Webb (Justice Smith).

The group sets out to the island as lava begins to reign down on the dinosaurs. Owen is focused on finding and saving Blue, his raptor that has survived in the wild. Claire is concerned with getting the majority of the creatures to safety. But along the way, the group discovers that events aren’t as they appear and they uncover a conspiracy that could lead to our entire planet to chaos. Along with Lockwood’s granddaughter, Maisie (Isabella Sermon), they must find a way to stop the conspirators.

When I said I loved this film, there are a lot of good reasons why, beginning with the nonstop action. While the plot is not complex, there are plenty of moments with the dinosaurs and the characters. Owen gets plenty of chances to be the hero, surviving an island full of dinosaurs along with the other characters. Claire gets equal opportunity to shine, put to work saving Blue by Zia. The action sequences would not work as well without the design work on the dinosaurs themselves. Not only do the animals look right but they move like real animals. There is a massive amount of work that can be seen in creating just the right look for the dinosaurs and this pays off in the fight sequences showing off the T-Rex as well as Blue and an Indoraptor, a creation of the villains of the film. The animatronics of the creatures is in depth and the motions of the animals is incredibly believable. Beyond the special effects of the dinosaurs, the design of the volcano, the island and the lava explosions create tension and feel realistic. Blue especially is designed to build empathy and is a character all on her own.

The plot is another point in the movie’s favor. What I like best is the exploration of the morality surrounding cloning, both animal and human. How far is too far and should humans meddle with nature? Those questions raise a lot of thought. There is also a lot development surrounding human avarice and the hubris of creating life just to serve man’s greed and the consequences of attempting to control that life. What is done best in the film is the consequences of cloning these animals and what happens when humans lose control. I especially like the karmic justice meted out to those who would put greed over kindness. There is also a mystery surrounding Maisie that added depth to the plot.

There are also a lot of great references to Jurassic Park. One of the pluses to me was getting Jeff Goldblum to reprise his role of Dr. Malcolm. While it is not a large role, he gets to bring in some of the commentary on the consequences of trying to control genetics. This helps tie back to the themes of the original film, maintaining a similar quality while updating the films for the modern era. Many of the dinosaurs harken back to the original film, especially a scene with an Apatosaurus walking near the water in a scene reminiscent of the first Jurassic Park. Those sprinkling of scenes will make old fans happy and do nothing to impede a new fans enjoyment of the movie. 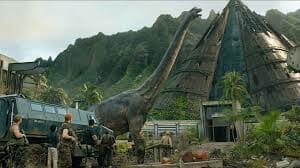 The actors along with the special effects are what make the movie work. Chris Pratt does a great job of imbuing his character with intelligence and humor. Dallas Bryce Howard is empathetic and caring as Claire. Daniella Pineda is fierce and smart as Zia, the character keeping her cool as she helps Blue. Justice Smith is hilarious as his character alternates between figuring out all the tech and screaming like a girl when chased by dinosaurs. Young actress Isabella Sermon does a great job, imbuing her character with wits and strength in the face of danger. Blue is a character of her own, even though she is run on animatronics but without her, this movie would be much blander and she ends up, like Jurassic World, being the hero of the film.

There are some elements that don’t work as well. One problem is the predictability of the film. While a lot of that is normal for an action movie, there were no surprises. I knew who the villains were and I knew what was going to happen long before they showed us. Too much of this was telegraphed and I would have liked to have more mystery within the film. The only mystery was surrounding the conspiracy and it was easy to figure out.

The other element that was forced were several of the plot points. There were points when a character acted out of character just to advance the plot. There was one such scene with Maisie’s character where a dinosaur is hunting her. Her character hid in the worst place imaginable and the logic of that bothered me. There is also a point where Owen’s character could have dealt with a threat but he ends up in a different location and the jump in sequence didn’t make sense for the story. It was obvious where the writers wanted the story to go and the characters took actions that they might not have done otherwise to further the writer’s objectives rather than acting in a logical, natural fashion. I don’t think every viewer will notice, though, and the film was still enjoyable.

Overall, I did love this film. The action and the dinosaurs kept me from dwelling on the small flaws in the movie. If you liked Jurassic Park or Jurassic World, you should love this film. The actors did a great job, the characters were intelligent and the consequences at the end of the movie believable and realistic. Blue was fantastic and I kept rooting for her over the humans. I can’t wait to see what they do with the final movie in the trilogy!

Your thoughts and opinions are important to us, so please leave a comment in the section below the article, and if this is your first time visiting please be sure to read the Privacy / Terms and Conditions Of Use