Skip to content
Thu. Jan 23rd, 2020
You’re getting a six-fer this week, with what Turner Classic Movies calls romantic mystery/film noir classics with the six films in The Thin Man franchise. 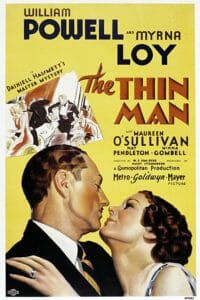 TCM did a full retrospective of this series as their New Year’s Eve marathon, and it’s easy to see why this series was chosen. Even though there are diminishing returns the longer the series goes in, it remains fun all the way to the end.

William Powell and Myrna Loy play Nick and Nora Charles. She comes from money, he’s a retired police detective from the wrong side of the tracks who married well. They’re both witty, madcap, charming, and big drinkers (everyone with money is a big drinker in most of the films from the 1920’s and 30’s, presumably because it indicated that they were wealthy and carefree). They’re also smart. And they have a wirehaired terrier named Asta (who is, in the tradition of most animals in movies, the most popular character in the series, despite not actually being the one who solves any crimes).

Most of the movies are based on books by Dashiell Hammett and good writing begat good scripts. Powell and Loy have amazing chemistry, so you never once doubt that they’re in love and adore each other. And their comedic timing is spot on. Really, this was dream casting, though Loy always seems to have this chemistry with anyone she’s acting against. But Powell is so good you can’t imagine anyone else as Nick to Loy’s Nora. 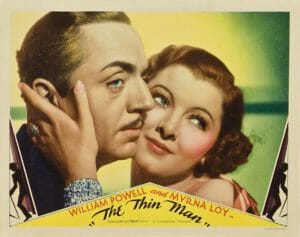 Each movie manages to have a nightclub dance/song scene, which was pretty typical for movies of the day. All of these are really excellent, and most go uncredited, but they definitely add to the movies, as opposed to being just filler. And in many cases, said nightclub scenes have a lot of hilarity ensuing before and/or after the song and dance numbers.

The first four movies were directed by W.S. Van Dyke, who’s responsible for pretty much everything that makes these movies great, including creating an atmosphere for Powell and Loy that really played to their strengths at improvisation within character. The first three movies were written by a husband and wife team, Albert Hackett and Frances Goodrich, and they really knew how to make a married couple zing.

In The Thin Man (1934), there’s an absentminded professor who goes missing, and his daughter wants him found. Said professor is suspected of murdering his mistress, but has he? Enter former New York detective Nick Charles, back in town with his wealthy Californian wife, Nora, and their dog Asta. The professor’s daughter convinces Nick – urged on by Nora, who thinks it’s all fun and exciting, which it is – to find out what’s really going on. Nick does, with a lot of wit, drinking, and danger along the way, with an “everybody in the room for the reveal of the real murderer” ending.

This movie is definitely a madcap romantic comedy mystery with all the noir elements other than being dreary – there is no dreary where Nick and Nora are concerned. There are so many funny to hilarious lines that you could miss some if you’re not paying close attention. Nick and Nora are crazy about each other, prank each other, prank others, and generally have a ton of fun. The mystery is good, with a great cast which includes Maureen O’Sullivan and Cesar Romero (playing a Swede, why ask why). There’s a lot of sordid going on, too – divorce, affairs, gigolos – all of which contrasts nicely with Nick and Nora’s relationship. And it’s easy to see how this movie spawned a franchise – when the movie’s over, you want to see more of Nick and Nora.

Of course, the issue for this franchise is that the thin man in question was the professor, and he’s not going to show up in any of the other movies. But, like all good franchises must, they figured out a way.

In After the Thin Man (1936), Nick and Nora are heading back to San Francisco after their vacation in New York, and once they arrive home are asked to help out a relative of Nora’s wealthy family. A cousin’s loser husband is missing, and Nick is coerced into looking into his disappearance. But said loser husband winds up dead and the cousin is accused of murder. Did she do it? Maybe, but there are a lot of possibilities and several really good suspects. Nick ferrets out the real culprit and exposes said culprit in what is the standard “everyone in the room” ending for this franchise.
This one wasn’t quite as good as the first, but still is pretty darned excellent. The mystery is quite twisty, and you do need to pay attention to realize who the real killer is. The cast includes James Stewart and Mrs. Asta (yes, Asta has a wife, and a hilarious subplot). The script does justice to the first movie while still standing on its own. You could watch this without having seen The Thin Man and still enjoy it fully. 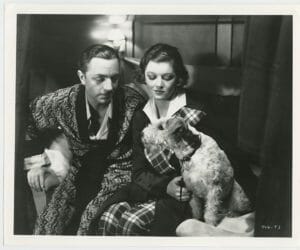 In Another Thin Man (1939), new parents Nick and Nora are back in New York and called in by a wealthy industrialist who thinks someone’s out to kill him. Turns out he’s right, but once he’s dead, the obvious suspect may be too obvious.

The returns start diminishing slightly here but the movie is still good. The plot is another well done one, we have plenty of suspects, Nick and Nora get to do their thing, but because we have Little Nicky, Loy has less screen time, which is a detriment, though Little Nicky’s subplot is actually pretty hilarious. The cast includes Otto Kruger, C. Aubrey Smith, and Shemp Howard (you read that right), along with several men who looked interchangeable onscreen but were actually different characters. Lots of twists, the usual “let’s all get together while Nick explains what happened” ending, and a fun time, even if it’s not quite as good as the first two.

Shadow of the Thin Man (1941) finds Nick and Nora trying to enjoy a day at the races. If only a jockey hadn’t been killed. An old friend of Nick’s wants him to investigate, but Nick still just wants to have fun. However, as more people get killed, Nora manages to convince him and it’s back to the mystery solving for the two of them.

While there have always been mobsters in the Thin Man films, this movie goes right for it and Nick’s up against the Mob. The cast features Donna Reed and Stella Adler, and the plot is still twisty enough to be good. The jokes are still there, the zing and the zip is around, Asta and Nick Jr. do their part (but not too much in Nick Jr.’s case, which is fine), and Loy and Powell continue to be effortlessly fun and charming. Easily as good as the third movie, though it’s the first not written by Hackett and Goodrich, and it shows in how Nick and Nora talk to each other.

The Thin Man Goes Home (1944) is where the returns diminish more. The plot is in the title – Nick and Nora, with Asta but not with Nick Jr., go home to visit Nick’s parents. (The only grandparents in the world who don’t ask about their grandson, but whatever, none of us care about Nick Jr. because him being around makes his parents less fun.) Nick’s dad has never approved of Nick’s career, but when someone’s murdered pretty much at their door, and dad becomes a suspect, Nick’s skills are finally given his father’s approval.

This is the first not directed by W.S. Van Dyke (sadly, he’d committed suicide prior to filming), and the magic is leaving since Van Dyke’s techniques weren’t necessarily being used by the new director. However, there’s still wit and fun, but the plot is murky, Nick and Nora aren’t nearly as madcap, there’s not a lot of drinking, likely due to war rationing, and while it’s still good and fun, it’s not AS good and fun as the prior movies.

Song of the Thin Man (1947) is the franchise’s swan song. Nick and Nora are back in New York, investigating the murder of a bandleader. After hours jazz clubs and floating casinos feature in the plot, and Nora’s more help in the solving of the crime than in prior movies.

The cast features (a very young) Dean Stockwell as Nick Jr. and Keenan Wynn. The plot is okay but muddled and it’s hard to care about anyone other than Nick and Nora. They aren’t as carefree and madcap as before – neither is the country, after WWII, but somehow, this is a letdown, because it would have been nice for things to still seem gay and carefree in Nick and Nora Land. But it’s not, and the movie suffers for it. W.S. Van Dyke’s direction is sorely missed, and the great writing of Hackett and Goodrich is missed even more – much of the dialogue is banal or clunky.

Powell and Loy are still marvelous, though, and it’s worth it to complete the set and watch this movie, if only to see them one last time as Nick and Nora. 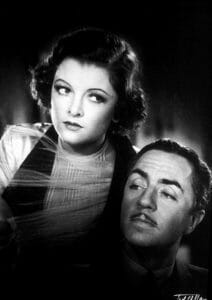 Even though the last two in the franchise aren’t gems like the first four, they’re worth a look. I really recommend watching them all in succession because you can start to forget who’s who in terms of supporting characters or relationships if you let it go too long in between movies. But, in reality, it doesn’t matter. Tune in for Powell and Loy at the top of their game and just enjoy the fun, fizzy, wild ride.