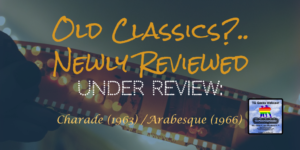 Editor Note: Gini has her hands full this time with a Double Feature.

Despite the leads of these two movies all being great actors, we have celluloid proof that Gregory Peck is no Cary Grant and Sophia Loren is no Audrey Hepburn. And, frankly, TCM agrees, but TCM has a duty to provide mediocre films as well as great ones. And I have a duty to watch them and report back to all y’all. 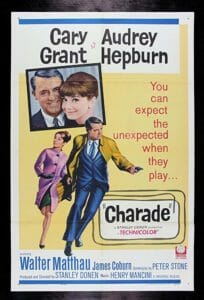 Charade is the best Hitchcock movie Hitchcock never made. And Arabesque…is the best of the slew of imitators that immediately followed. Which is a good definition of damning with faint praise.
Charade starts with a man either leaping or, more likely, being thrown off a train. We then meet expatriate Regina “Reggie” Lampert (Audrey Hepburn) on vacation with her BFF Sylvie (Dominique Minot) and said Sylvie’s little boy, Jean-Louis (Thomas Chelimsky) at a chic European ski resort. Reggie’s just finished confiding to Sylvie that she’s about to ask for a divorce from her husband, Charles, because she feels that she doesn’t love him anymore, maybe never loved him, feels he doesn’t love her, and that she doesn’t really know him at all, when a man, Peter Joshua (Cary Grant) approaches and asks her questions that seem like he knows more about her than he should. Reggie is witty and charming, Peter is witty and charming, everyone goes home, but not together. 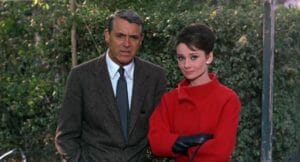 Reggie gets home to Paris to discover that Charles has sold all their things and taken everything other than her clothes, and left their apartment, presumably heading off to South America or somewhere. Peter shows up, just in time, as men start threatening Reggie, singly and in groups. And these aren’t men to mess with – played by George Kennedy, James Coburn, and Ned Glass – who are all menacing in various ways and willing and possibly eager to harm Reggie to get what they want. Apparently, Charles was in a military regiment with these men, they stole a lot of money, and Charles stole it from them. And they want it back.

Reggie knows nothing of this. Or does she? The CIA contacts her in the person of Hamilton Bartholomew (Walter Matthau) and tells her to trust no one but himself, particularly Peter Joshua, because these men are dangerous and she needs to find the money, stolen from the government, before they do. There was a fifth member of the regiment, who was killed during the theft. 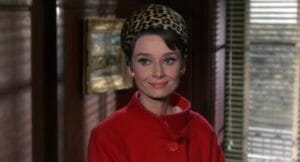 Who, it seems, is Peter Joshua. Or is it? As the movie goes on, Peter’s name changes, what he supposedly is and does changes, and yet he keeps on saving Reggie and charming her as well.
Can Reggie trust anyone? Will Sylvie and Jean-Louis be harmed because they’re dear to her or are they in on whatever it is, too? Is Peter, or whatever his name is in “this” scene a good guy, a bad guy, or something else? And will Reggie be able to resist falling in love with him, whatever and whoever he really is? And, what really happened to that money?

Charade is exciting, perfectly acted, beautifully shot, with a crackling, witty script that keeps you guessing all the way through. It has it all – romance, mystery, thrills, suspense, and humor. It’s one of those few movies that seems timeless and perfect, and one you can watch over and over again.
Charade has been remade several times, most notably with Somebody Killed Her Husband and The Truth About Charlie. I loved both of those when I saw them long, long ago and, now that I’ve seen the movie that started the “unsuspecting spouse” sub-genre, I’m hoping TCM shows them soon, so I can watch them again. I can safely say that even if I have Pillow Talk and The Goodbye Girl re-watching reactions to them, both of those movies are going to hold up better than Arabesque… 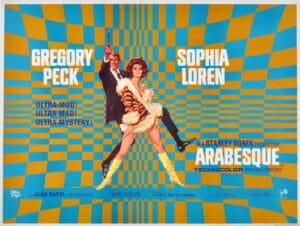 Arabesque had all the right ingredients – same director, similar script, and same lead as Charade – until Grant had to drop out. So, they chose another great actor. Only, as Gregory Peck apparently said many times during the filming, he’s no Cary Grant.

Comedic timing is not something everyone can learn or be good at. Masters of that craft –of which Grant was definitely one and possibly the best – make it look easy. Only…it isn’t easy. And if you aren’t good at it – and Peck is definitely not – then lines that should be witty fall flat, and scenes that should be fun and exciting are not. 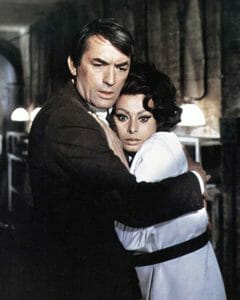 Sophia Loren isn’t good with the comedic timing either. She got better at it – she’s fine in the Grumpy Old Men movies, after all – and she’s gorgeous so at least there’s that. But she’s stuck in a “madcap” role she can’t sell. She’s not believable as anything she claims to be.

Arabesque role reversals Charade. In this one, Peck plays Prof. David Pollock, an expert in ancient Arabic hieroglyphics. Loren plays Yasmin Azir who is, like everyone other than Pollock, not what she seems. The plot involves Pollock being asked by a Middle Eastern Prime Minister to infiltrate the organization of crime lord Beshraavi (Alan Badel) in order to stop a plot against said Prime Minister. Why Pollock’s name is called is supposedly due to his way with a cipher, but the movie doesn’t sell it well.

Nor does it sell Peck, he of many successful westerns and war movies, as a man who can come up with the action when needed. Indiana Jones Pollock is not.

Pollock is captured, escapes, runs, does things, assisted or not by Yasmin and many other characters not interesting enough for me to bother to look up or talk about. The plot is not great – in Charade, the bad guys are after money our heroine’s husband stole from them, so her being a part of the movie makes sense, but in Arabesque, there’s truly no reason for Pollock to be involved, particularly since there just have to be others, perhaps in the Prime Minister’s own government, who could do the job better, hieroglyphics or no. 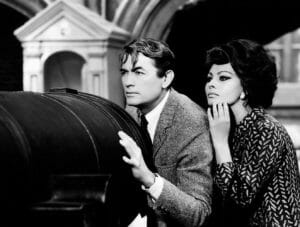 Arabesque is convoluted, somewhat inane, hard to follow for no good reason, and poorly acted. Peck and Loren have never looked more like amateurs, and the rest of the cast is not memorable. Great clothes for Loren, though, and some nice locations. But this movie is not good and it’s not fun, either. It also feels, unlike Charade, incredibly dated. The movie posters for the films say it all, really. Charade’s still looks active and interesting even by today’s standards, and Arabesque’s shouts “ULTRA MOD! ULTRA MAD! ULTRA MYSTERY!” which, really, says it ultra all.

The hubs and I watched Charade first, and then Arabesque (well, actually, we first tried to watch another Charade knock-off, 1966’s Gambit starring Michael Caine and Shirley MacLaine, which, thankfully, had not fully recorded for some reason so we were able to stop watching after 5 incredibly painful minutes – and this was with Michael Caine as his most beautiful, meaning I should have been able to soldier through it just for the visuals), which could account for why we thought Arabesque was so incredibly awful. However, that’s why we do it, so you don’t have to.

Charade also started a slew of movie titles with a single word which were all copycats. Per TCM, and, after watching Arabesque and those 5 minutes of Gambit, I have no reason to doubt them, none of these others can hold up next to Charade.

When choosing a mystery-comedy-romance-thriller-one-word-title movie, always choose the best. Go with Grant and Hepburn and choose Charade.

Charade: 5 stars out of 5
Arabesque: 1 star out of 5
Gambit: Did Not Finish