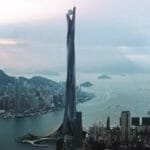 I like action movies and I really appreciate Dwayne Johnson in a good action flick. When my husband and I caught the trailer a few months ago for this film, it intrigued me, even as it triggered my fear of heights! What made it sound interesting was the idea of Dwayne Johnson as a family man and ex-FBI agent brought in as a security expert to a unique high tech building, the tallest in the world. The trailer suggests that he spots an issue with the building’s safety and so I completely expected the action in the movie. However, I ended up loving the family aspects much more.

Dwayne Johnson plays Will Sawyer, an ex FBI agent who now runs his own security consulting business. A former teammate and friend, played by Pablo Schreiber has recruited him to assess a newly built skyscraper and assess its safety. He and his family, wife Sarah (Neve Campbell) and children Henry and Georgia come live in the residential area of the building while he does his assessment. His work is almost complete when the building is taken over by terrorists and set on fire. Framed for crime, Will is wanted by the police. He must somehow save his family, trapped inside the building, while also manage to clear his name. 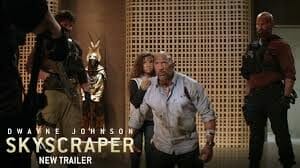 The element that works the best is Will and his family. Will’s former job cost him part of a leg and almost cost him his life. In recovery, he met his wife and moved on to a quieter life. The development of his background and his relationship with his wife and children is pivotal in the film. You have to believe he would do anything to save his family and much like Die Hard, this is the part that is completely solid. The dynamic between Dwayne Johnson and Neve Campbell sells the relationship and the children are cute while also seen as intelligent. I happen to think the best part is that Sarah gets to have as much agency as Will, showing intelligence, strength and written as a woman whose strengths shine as much as her husbands’. I love the acting between both her and Dwayne Johnson. They work well together and the children are equally good.

The action is another piece that makes me like this film. The fight sequences were believable. Dwayne Johnson is good at making these excellent in any film he is in. He doesn’t succeed automatically. There are times when he needs help and at one point, he and his wife work together to help rescue one of the children. He gets hurt and he has to figure out ways to get into this building while it is locked down from the fire. Most of the scenes were thrilling and kept me engaged in the movie.

While I don’t want to give away the concept of the movie, I also enjoyed the reasoning behind the terrorists attacking the building. I thought their attack of the owner of the building, Chin Han (Zhao Long Ji) felt realistic and had some solid thought behind it. The plot also utilized every plot device brought up in the movie and everything was connected by the end of the film. I like a movie that doesn’t forget the concepts it brings up and uses even tiny interactions between characters.

Some of the weaknesses are really some of the standard problems you have in action movies. The plot was predictable. There were no surprises. Every bad guy was spotted as they were introduced. There was also a lack of development of any of the characters other than Will Sawyer and his family. We get a bit of information on Chin Han but not much and even less on the villains which ends up making them feel very two dimensional.

While the action sequences keep you engaged, there are a few that just make me lose attention as they are frankly, unbelievable. Most action films have a few but this one has quite a number that made me question the writers. While I still enjoyed them, I did have trouble taking them seriously. What probably kept the tension in some of the scenes was the use of the height to build the pacing and fear of what could happen. 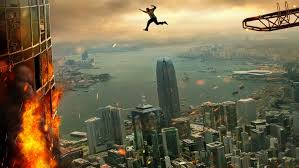 What disappointed me the most, though, was the mismatch between the trailer and the actual movie. The trailers are nothing like the actual film, other than Will is a security expert who is checking out the film. There were some changes between the trailer and when the movie was edited which led me to expect more of an action intrigue film when in fact you get an action rescue disaster film. Again, the family dynamic actually made me like the movie more but it wasn’t what I went in expecting so be warned the trailers aren’t really giving you the real movie.

Overall, if you like Dwayne Johnson and you like action films, you’ll like this one. I think if you like the family rescue angle and a wife who is as dynamic as her husband, you will really enjoy this film. Also, if you have any fear of heights, let the title warn you what to expect and plan for those scary edge of the building scenes. It definitely spooked me a few times and helped add to the tension in the movie!