Skip to content
Tue. Jan 21st, 2020
Editor Note: Gini returns, after a hiatus, with another Old Classic from the overflowing vault of her (new) hometown station, Turner Classic Movies.

Let’s see whether Gini believes this movie stands the test of time or has it marched on, shall we? 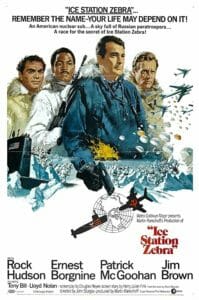 I’ve never seen this movie in full. I’d seen bits of it, usually when changing channels back in the day, but since I’ve been on something of a Rock Hudson kick, and since the hubs spotted this on Turner Classic Movies, we figured, why not watch it?

Well, possibly because it should be named Ice Station Boredom.

Based on a book by Alistair MacLean, aka the Tom Clancy of his day, we’re following a submarine crew forced to race on up to the North Pole to ostensibly rescue a group of British weather station personnel. Of course, they’re actually trying to beat the Russians to a fallen Russian satellite that contains highly sensitive information.

That plot sounds totally exciting, and in the book it probably is. Maybe in 1968 this was thrilling, but for today, all it is is dull and murky. And good luck to you knowing who anyone is.

I mean, I know that the sub commander is Rock Hudson. Can’t remember his character’s name without looking it up on IMDB. We have a British spy played by a guy who was starring as a British spy on TV, Patrick McGoohan. We have a Russian who’s been on “our side” for decades played by Ernest Borgnine. We have Jim Brown as the tough Marine captain who’s supposed to make the Marines on board, um, tough. And we have crewmen. So many crewmen. 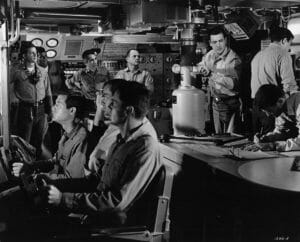 Normally I’m all about the visuals, and, gosh, everyone’s in uniform. But they’re all interchangeable and no one’s name is said clearly enough or often enough to register. I have no idea who was who, so naming the characters is pointless.

There’s a “tense scene” where our brave dudes fall into a giant crack in the ice. But it’s during a snowstorm, so everyone’s got their hoods up, snow goggles on, and lower faces covered. I could no more tell you who fell in and who jumped in to help save them, than I could recite Russia’s national anthem. I’d probably have better luck with the anthem.

That scene was probably great in the book, where the author can tell you who’s who in narrative or via dialog tags, but in a visual setting it was just a mass of confusion and there’s no tension because you again have no idea of who’s who. 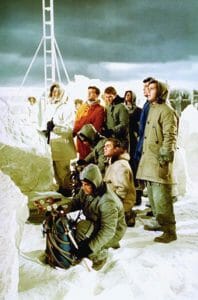 We have the usual intrigue – shocking no one, one of the people I called out by real name is playing a *gasp* spy, and if you can’t tell who it is it’s because you haven’t seen a movie in the last 50 years. Maybe the “twist” was a shocker in 1968, but it’s not in 2018.

The spy tricks Good Guy 1, which then also tricks Good Guy 2. But, out of nowhere, Good Guy 2 realizes that he’s been tricked (too late for Good Guy 1) and manages to stop the traitor at…the…last…second…which this film draws out for zero tension because we know Russia doesn’t get to win because this was made by Americans in 1968.

And it’s slow. Oh, so slow. It takes almost 40 minutes to get going. And then when the going gets moving it slows right back down again.

There is one really good scene where the sub’s taken in water and things are dire. It’s exciting, but it’s more interesting in terms of “would a real sub captain do this?” than anything else. I mean, this happens midway through the movie – of course they’re going to survive to get onto the ice and snow from up top. But I was interested, and that would make it about the only scene that really grabbed me and made me want to watch and wait for the movie to become a “classic” in my mind. 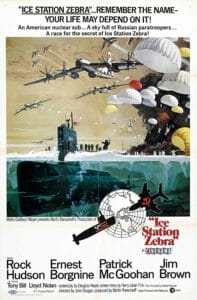 Also, there is zero chemistry in this movie. Zero. Hudson has great chemistry with every leading lady I’ve ever seen him act against. He has great chemistry with most of his male costars, too. The man was a chemistry machine in everything I’ve ever seen him in, and I saw him live on stage for a revival of On the Twentieth Century and he had bags of charisma then, too. And yet, there is no chemistry between him and anyone else, or any of the other actors against each other, in this movie. It’s like the chemistry was sucked out and no one has any presence at all onscreen, let alone with each other. You really only notice Hudson because he’s the tallest. Period.

The hubs claimed to like the movie…but he slept through half of it. (Yes, half. I timed it.) I, sadly, stayed awake, stunned by the boredom. As a relic of the Cold War days, I guess it’s okay. But despite MacLean being his generation’s Clancy, Ice Station Zebra is no The Hunt for Red October. Do yourself a favor and only watch Ice Station Zebra if you need a nap.