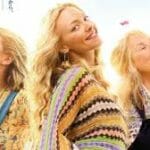 I love musicals. I adore music of any kind but musicals just make me want to break out singing. I even have the sheet music to Buffy The Musical. So when I heard there was a sequel to Mamma Mia, my excitement levels were through the roof. To understand, when I watched the first Mamma Mia, I wasn’t expecting to love it as much as I did. So my expectations for the sequel were high. I was not disappointed. The story is all about love and celebration, fun and heart.
In the film, it is five years later and Sophie (Amanda Seyfried) is running her mother’s villa, her mother Donna (Meryl Streep) having passed a year earlier. With the help of her manager, Fernando Cienfuegos (Andy Garcia) and Sam (Pierce Brosnan) her step-father, she is working on setting up the celebration when things began to go wrong.
Her relationship with Sky (Dominic Cooper) is turbulent as he is off in New York, his job preventing him from returning for the celebration. Harry (Colin Firth) and Bill (Stellan Skarsgård) can’t make the event. Sophie is uncertain of herself and whether she can handle running the villa on her own. With the assistance of the Dynamos, Tanya (Christine Baranski) and Rosie (Julie Walters), she learns about how her mother met each of her father’s, Harry, Bill, and Sam as well as discovering how her mother arrived on the island to run the villa.

We meet the early versions, Lily James as Young Donna, Jessica Keenan Wynn as Young Tanya and Alexa Davies as Young Rosie as they help Donna with her plans. We also get to meet the men, Hugh Skinner as Young Harry, dancing in Paris, Josh Dylan as Young Bill on his boat, and Jeremy Irvine as Young Sam when he helps Donna rescue a horse in a storm. We learn how Donna creates her path for herself and thrives as a young, unwed mother. Ultimately, Sophie even meets her unknown grandmother Ruby (Cher). 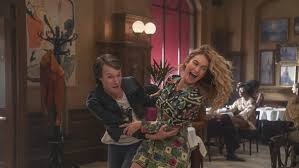 The best element of the film are the unexpected moments of both humor and drama. While the plot is not complex, tiny details are what win me over to loving this movie. Christine Baranski and Omid Djalili as a Greek customs officer kept me laughing throughout the film. One of the best lines, ‘Be still my beating vagina.’ Even my husband, not a fan of musicals, liked the comedy. Omid Djalili stole every scene he was in. One of the best details is the choice of Jessica Keenan Wynn as young Tanya. She has managed to completely capture Christine Baranski’s mannerisms and voice. That unexpected acting was a win for the movie. The moments with Tanya and Rosie as they help Sophie, with one of the most beautiful lines, “Do what makes your soul shine.” The comedy of Rosie grabbing cake at every opportunity or when young Donna meets a singer who is so bad he’s great, giving us a comedy jewel. Each of these little scenes tie the film together and connect Sophie’s path with her mother’s. 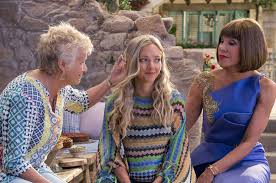 The first movie was all about Sophie’s dad. This film is all about her connecting with her mother. Even though it is poignant and brought me to tears at points, there was a lot of love and heart to Sophie building up the hotel for her mother. The story developing the elements of friendships between the characters, allowing the viewers to see all the love between all of them was beautiful. The best part was how Sophie’s story mirrors her mother’s, a cycle between mother and daughter. It is very female-centric but because it focuses on the friendships and relationships, it works on more than one level.

Since this is a musical, we cannot skip the music. While the setup for all musicals is at its heart a bit silly, the movie embraces the comedy. While the narrative is what drives the story, the music enhances each moment, each scene. Each piece complementary to the emotion of the moment, allowing us to celebrate with the characters. The dancing and music is performed well, each actor bringing their all and quite frankly, young Lily James does an impressive job with her singing and dancing. 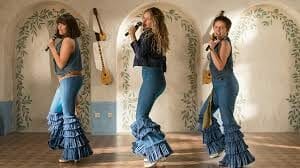 The actors are good. While none of them truly stretch, what they do is well done. Amanda Seyfried and Lily James carry the film, each dynamic in their own way. The emotions each portray is realistic and carries the heart of the film. While we don’t see as much of the other actors, each does their part. I especially thought the performance of Jessica Keenan Wynn and Alexa Davies were brilliant, mirroring their older ‘selves’ perfectly. Whoever cast them did an incredible job and the director, Ol Parker, brought the best out of each of them. I also loved young Harry, Bill and Sam. Cher is solid, her singing worth the time and she still has considerable charisma. The best bonus character is played by Omid Djalili who does a fantastic job with his small role. 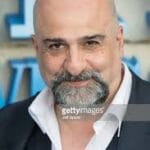 The plot is not complex. I knew what most of the film would bring us and there were few surprises. I was pleasantly surprised by the comedy elements, especially a final scene by Omid Djalili but overall, the story was exactly what I was expecting. There were predictable moments, as most romantic comedies will have, including the love scene for Ruby. The relationships are what drive the film, though and most women will love to see these scenes. 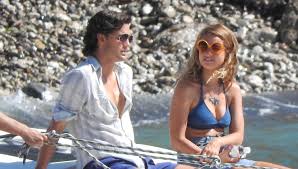 Probably my biggest issue was the lack of development of Ruby’s character and that Meryl Streep was largely absent, despite her billing in the trailers. I also love that Cher can still sing but her age was distinctly showing as well as some of the work that has been done. I felt her moment was well shot, however, and her elements did work. 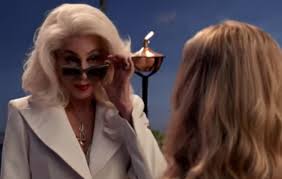 Overall, the movie was fun and energetic. It made me want to get up, dance and sing with the characters. I loved Sophie’s connection to her mother. It is all about her love for her mother and her mother’s love of her friends. The relationships will appeal to both men and women while the humor will lighten some of the more poignant moments. If you love ABBA, singing and movies about mothers and daughters, you will adore this film. The bonus are the handsome men like Pierce Brosnan, Stellan Skarsgård and Colin Firth for the older women and the beautiful young hunks for the young women. The best part is the love between Sophie and Donna and it almost broke my heart watching their scenes. Bring a hanky or two.
Rating: 4 out of 5 dancing queens