Skip to content
Sun. Jan 26th, 2020
Editor Note: Gini has another Old Classic film from her Turner Classic Movie Collection watching. Since Atlanta is home to Turner Classic Movies it is only right that Gini should be reviewing them with her view of the world.

What can it be this time?

Gini is tackling what Turner Classic Movies started their Alistair Simms block with in the 1960 comedy School for Scoundrels. 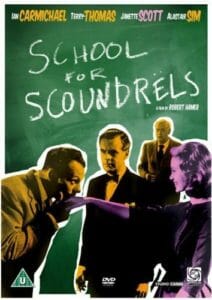 Alastair Sim is best known for the “definitive” Scrooge. That he could do comedy was something of a revelation for me. But he can, and he does, in School for Scoundrels.

The movie is based on a series of satirical books, “One Upmanship” and
“Lifemanship” and so on, written by Stephen Potter. He was a real person (or that was a real pen name, but whatever, the books were real books) but he’s played in the movie by Sim.

Mr. S. Potter runs the College of Lifemanship and to this college comes Henry Palfrey (Ian Carmichael), who by all accounts is a well-off businessman. But, as Palfrey explains his situation, it’s clear why he’s here.

Palfrey’s met a lovely young woman, April Smith (Janette Scott) whom he’s quite smitten with. But he’s treated as unimportant by all of his employees and his head clerk runs the business and refuses to allow Palfrey any authority; maître-ds ignore him, even when he tips them; his so-called friend, Raymond Delauney (Terry-Thomas) is trying to steal April out from under him; his tennis club has dropped him from their team; and he’s cheated by used car dealers. Palfrey needs Potter’s tutelage.
And Palfrey excels. Once he’s ready to graduate, it’s time to go back into the field and turn the tables on all those who’ve one-upped him in the past. But will Palfrey follow all the teachings – which include getting what you want from a girl without having to marry her – or will his true nature win out?

Shot in black and white and set in London, the movie should feel old, but it really doesn’t. The black and white works, and the romantic comedy situation has you rooting for Palfrey, just as you’re supposed to. He’s a nice, decent person who has to become a scoundrel in order to stop others from taking advantage of him.

This was a funny and above all sweet movie. It seems far less dated than Pillow Talk, having more in common with several of the timeless screwball comedies like Bringing Up Baby

The hubs noted that the female lead seemed quite passive, and that would be the only thing that might require an “it was the times” response. April is a working girl in London in the late 1950’s/early 1960’s, and the two men fighting over her are both extremely wealthy. She can’t be blamed for being a bit dazzled and she’s still got her version of spunk going, so I had no issues with the character at all, particularly since there is no horrific squick or triggering factor going on in the movie. April is pretty and charming and smart and it’s clear why both men are interested in her, and it’s also clear why she’s interested in both men. We’re following Palfrey, not April, so we don’t have any “girl power” scenes with her, and they aren’t necessary to this particular movie. 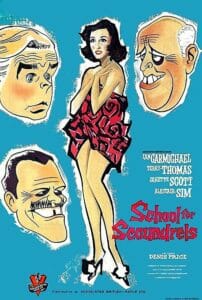 A note for any fans of the TV show Psych – this movie is definitely the basis for the “Chivalry Is Not Dead…But Someone Is” episode. The first school scene will make you squee.

All in all, I found School for Scoundrels to be charming and enjoyable, and I recommend you learn the fine art of Lifemanship as soon as possible.