There haven’t really been that many romantic comedies this year. At least, not the type that hasn’t felt like they’re faithfully following a formula.

Annie Platt (Rose Bryne), a museum curator in a seaside English town, is in a relationship with Duncan Thomas  (Chris O’Dowd) a professor at the local university. She’s also (unwillingly) in a long-term relationship with his obsession for 90s indie-rock musician Tucker Crowe.

Tucker Crowe is a seriously obscure singer-songwriter who walked away from a gig (and his career) and disappeared into the ether like J.D. Salinger. His devoted fans are left with a single album, Juliet, Naked. As far as Duncan is concerned, his connection to this album and Tucker Crowe is the seminal achievement of his life. He even hijacks dinner guests to take them to his basement lair to introduce them to his idol.

After the first twenty minutes, you’ll have a difficult time figuring out which is suffocating the life (and joy) out of Annie more: Duncan’s inattention, his lack of interest in anything to do with not him, or his devotion to Tucker Crowe.

One day, Annie comes across a previously unreleased demo of Juliet, Naked in their mail. She opens it and plays the tracks. What follows unfolds like a scene from a 90s grunge film (I wasn’t the only one laughing as Duncan searched for his portable cd-player) and leads to Annie once again dealing with an emo-Duncan all in his feelings.

Once Duncan realizes Annie (still) isn’t impressed by the album, his drama shifts to overdrive. In retaliation, Annie pours out both her disdain for the demo and frustration – at the years wasted on Duncan and a life that’s just spinning in place – by posting a negative review on Duncan’s forum.

The by-play between Byrne and O’Dowd is so believable and witty the irony that they’re again arguing around the actual problems in their relationship perfectly sets the stage for the film’s second act; when things get truly interesting because Tucker sees her review and sends Annie an email.

The pair begins a You’ve Got Mail-style email correspondence that carries the film far beyond the anticipated. These aren’t the gentle(ish) musing of the love-lorn. Annie and Tucker take advantage of the computer barrier to be dangerously open and honest with one another.

They share their history, dreams, regrets, and surprisingly sound advice. But Annie and Tucker connect digitally just as Annie’s relationship with Duncan begins its death throes (because Duncan is an insufferable git and does what they always seem to do). Her conflicted feelings are real but ultimately end up being misplaced.

Thankfully, the email exposition is continuously coupled with the day-to-day unfolding of both Annie and Tuckers life (with just enough splashes of Duncan thrown in) to anchor these relationships in the here-and-now.

This isn’t a relationship that happens in a vacuum or without the distasteful aspects of life, particularly because Tucker’s life is complete train-wreck he comes face-to-face when he attempts to take their relationship to the next level with by meeting when he comes to London.

Tucker’s drama – and subsequently extended stay in Annie’s home – forces everyone to confront what’s developing (and the roadblocks) between the two.

It also leads to a few encounters with Duncan that elevate the story from just being another “she sticks it to her ex” trope. These moments add a layer of nuance and heart to what could otherwise be brushed off given the comedy of it all. Instead, it lends the story an edgy realness that will hit home for audience members even as it makes them laugh.

Juliet, Naked could’ve come off as pathetically tired (I was less than impressed with the book) but is instead witty, relatable, and fantastically unexpected in the talented comedic hands of O’Dowd, the biting wit and spot-on timing of Rose Byrne and the deadpan humor of Ethan Hawke.

Juliet, Naked is ultimately Annie’s story. Tucker Crowe starts as the bane of her existence but becomes the catalyst for much-needed change and self-realization. Rose Bryne is perfect casting and everything from her subtle facial expressions to poorly restrained emotions will lead audience members through this rom-com that takes itself just serious enough.

Juliet, Naked is based on a Nick Hornby novel that reads more like a romantic(ish) drama than rom-com but the film adaptation, directed by Jesse Peretz, taps into the story’s indie-rock nostalgia and intertwines it with a story about second chances in ways that are just masterfully done.

Chris O’Dowd’s Duncan is at turns hilariously obtuse, painfully annoying, and completely recognizable. Rose Byrne finally has another role (she’s brilliant in Damages) worthy of her dry humor, and Ethan Hawke is at his self-deprecating best as the slovenly untogether Tucker.

Thankfully, Juliet, Naked hits more theaters starting this weekend so your chances of being able to catch this film increase. I highly recommend grabbing a ticket and giving it a go. 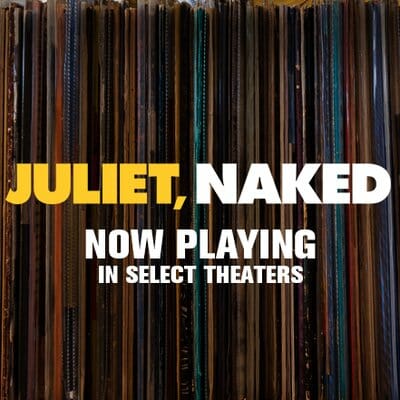 **don’t leave until the screen fades to black – the story keeps playing out through images into the credits.**

Ben’s Breakdown | “The Aeronauts” Sometimes Soars, But Sometimes is a Lead Balloon.