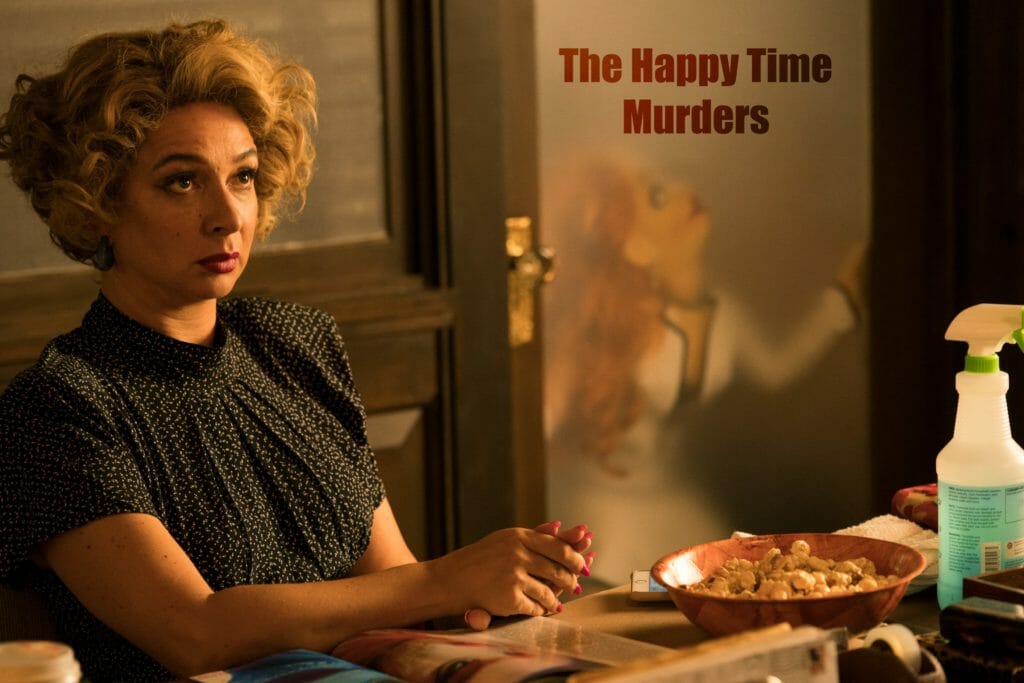 The Happytime Murders is supposed to be a dark comedy but in the end, is just a movie that tries way too hard to be edgy and crude to “deserve” an R-rating.

Grade: D (I walked out wanting all 91 of my minutes back)

The Details (such that they are)

Happy Time‘s billed as a “buddy-comedy.” But Melissa McCarthy doesn’t fit the vibe set by the opening sequence. Her backstory is interesting and the dynamic between her and Phil has rhythm and just the right touch of bitterness of some interesting “we used to be friends zingers” but it never settles into the necessary relationship to make the rest of their story unfold as more than info-dump flashbacks.

Phil’s life on the fringe gets disrupted when a femme fatale walks into his office with a case that lands him in the back room of a puppet sex shop (we’ll just pretend the majority of the scenes here were a mollie-induced hallucination if you please) when a mass murder occurs.

It’s not a bad set up for a who-done-it. I can even get past some of the prejudice-riddled back and forth that’s supposed to pass as dialogue and the fifth-grade-level humor to follow the actual story as it unfolds with just enough red herrings and old PI film flair to be a solid premise.

But, I never stopped seeing her as Melissa “doing Melissa.” I don’t know exactly why her brand of humor and the majority of her part consistently came across as unfunny (and uninspired) or flat but I was disconnected from her character from start to finish.

I’ve tried to pinpoint exactly what it is about this film that made it fall so very, very flat for me.

Beyond spending too much time trying to figure out what compelled Elizabeth Banks, Joe McHale, Leslie David Baker, and Maya Rudolph to keep saying yes to such a bad script that not even their skill delivering deadpan humor, master-level ad-libbing talents, or spot-on comedic timing could save in the long run, I just didn’t care; not even enough to enjoy their tomfoolery.

Had Happy Time really dialed in and put the amazing puppetry (because that was some next-level work) and the solid direction of Brian Henson to good use with a dialogue and the more effortless one-liners, the whole disgraced cop and ex-partner come together to solve the crime and save their friendship gig could’ve worked.

But the film commits a larger sin that it was impossible for me to get past:

The whole less than subtle attempt to build a world reflective of the actual one with puppets inserted as the “second-class” citizens set my teeth on edge.

I’m decidedly tired of films where the plight of real people is grafted on to a fictitious species as though the struggles marginalize people deal with on the daily are just a good story backdrop.

It’s happened so often I’m pretty convinced it’s why so many white people think “being” some version of a Black person (no, I don’t mean any attempt to re-created a role played by a person of color unless you start playing into blackface) for Halloween isn’t “real” racism. I mean, we’re not really ‘real’ people anyway right? As badass I as I think black and brown people are, we aren’t actually an Elder Race.

Just in case you missed the whole “puppet struggle” is real vibe established through crisp, colorful visuals and explanations (in Phil disembodied voice) early on, Happy Time inserts a scene where some bad-ass preteens try to roust a signing and dancing puppet on the sidewalk to steal his eyeball. The film continues to build on barely-veiled stereotypes to build its version of trapt houses, street gangs, chop shops and the like.

It’s a sea of microaggressions that just aren’t very funny. Then, Happy Time adds insult to injury by doing absolutely nothing with any of these scenarios and situations in the main story. So I’m left with a feeling of “but why” by the end of it all.

This type of lazy, uninspired, raiding the plight of the downtrodden as a plot device needs to be over. I checked out of Happy Time and very few of the jokes or haphazard crime-solving related to the actual murder-mystery weren’t interesting enough to overcome its faults.

When the press release for The Happytime Murders dropped, it prompted an almost immediate lawsuit by Sesame Street in the hopes of stopping the film from ever making it to the big screen.

I’m never a fan of stifling art just because someone thinks its problematic, but after seeing the final product, I find myself wishing team Sesame Street had been the victor.

I wouldn’t even suggest a cheap matinee to hate-watch, and that’s coming from someone who usually likes a film that’s too ridiculous for words.

Rating: 1 out of 5 (because I legitimately laughed at three scenes)

*I laughed more and engaged with the scenes during the credits about the making of this film. Now, that’s a movie I’d honestly be interested in seeing.

Ben’s Breakdown | “The Aeronauts” Sometimes Soars, But Sometimes is a Lead Balloon.