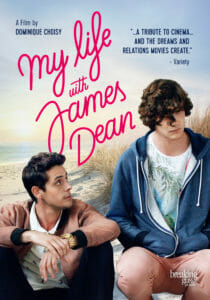 In Normandy a young filmmaker, Géraud Champreaux (Johnny Rasse), has been invited to premiere his first independent feature film (Ma vie avec James Dean) at the only theater there. They specialize on US action films and comedies, but a woman named Sylvia van den Rood (Nathalie Richard) has seen Géraud’s film and found it very powerful and insisted that he bring there. Sadly poor Géraud starts off this trip by having his cellphone stolen, finds that his movie is not scheduled to play at the cinema on the agreed to date, and then finds himself staying in a rather peculiar hotel with an even more peculiar receptionist. He finally gets his chance to show his movie the next day, but nothing turns out the way he had expected. He finds himself to be the object of affection from Balthazar (Mickaël Pelissier), the cinema’s projectionist and ticket taker, the receptionist is desperate to get his attention because she has personal goals of her own, then there is Sylvia who is an emotional wreck because her love life has fallen to ruin, and then lastly poor Géraud is trying desperately to get in contact with the person he’s involved with, but can’t seem to get through to him.

I’m liable to get in trouble for saying this, but this film is EXTREMELY French, and I base that off of cinematic stereotypes. Movies have portrayed the French as wildly passionate, with emotions running hot and cold, switching at a moment’s notice. Of course it does help that this is a romantic comedy. The laughs are somewhat esoteric, but once in a while there is some element of silliness that actually had me laughing out loud.

The cast is quite good. The film’s star, Johnny Rasse has a very tired demeanor about him, but it’s not without a good reason. His character is struggling to find an audience for his film, wants very much for it to be a success, and all the while dealing with this relationship that he’s in, which it turns out is the star of his film. It also doesn’t hurt that he’s extremely good looking. I am speaking as a gay man here and I found Rasse to be quite pleasant to look at, but I was also pleased with his subtle acting. While there is a lot of that hot/cold motivation going on with everyone, Rasse downplays it, which helps to convey that sense of tiredness he’s going through.

On the other side of that there is Pelissier as Balthazar. In some ways his immediate crush on Géraud is somewhat comical, albeit slightly tragic. He plays a young man coming out of the closet, and the way he becomes totally obsessed with Géraud is somewhat believable, and funny at times. Then there is also Sylvia van den Rood, the lady on the film board who is in an on again/off again relationship with the love of her life that at times becomes completely crazy, as well as the hotel receptionist Gladys (Juliette Damiens) who has more layers to her than the film conveys.

Written and directed by Dominique Choisy, this is a film that is very disconnected. All of the storylines are quite separate, and only intersect at a couple of comedic moments throughout the film. The danger is that the film ends up with too many storylines that take away from the whole. This is about Géraud and his own independent film, but with all of the other characters and their storylines it almost feels as if Géraud’s story ends up being shortchanged. And yet, I enjoyed this My Life With James Dean very much. While it is true that I would have preferred to have seen more about Géraud and how he’s trying to juggle his film, the long-distance relationship, as well as Balthazar, I found the finished product to be oddly entertaining. It does require going in to it with a very open mind, because this film completely breaks with convention. There is nothing standard about its narrative, and people who think they are going to see a very linear told story would no doubt be disappointed. However, for those who are willing to be challenged in seeing something totally new, they will find themselves curiously entertained by some of the comedic madness, and heartfelt performances in this delightful French film.

I give My Life With James Dean 4 out of 5 glasses of Beaujolais nouveau!!!