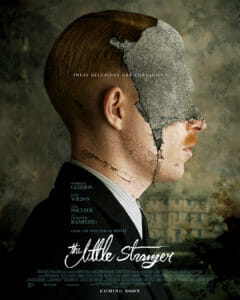 Set in a small village during Edwardian England, one of the local doctors, Faraday, has been summoned to make a house call to an 18thCentury Estate named Hundreds Hall. He first meets the man of the home Roderick Ayres, who was injured during World War II and also suffers from PTSD (although that diagnosis was probably referred to as “shell shock” at the time). He directs Faraday to meet with his sister, Caroline, as she will take him to see his patient, a young maid named Betty. Shortly after he meets the matriarch of the Ayers family and he then divulges that he had been fascinated by the manor ever since he was a child.

He even later confesses to breaking off a porcelain egg that was part of a mirror frame near the staircase so that he could keep a part of the house with him. He then starts to return to Hundreds Hall with increasing regularity, first as a means to provide treatment for Roderick, but after a time he starts moving about as if he were the man of Hundreds Hall. However things are not what they seem. Betty, the young maid to the Ayres, is scared to continue serving there. Roderick acts as if he’s afraid of something in the house, especially after there is a tragic accident involving a young girl. Slowly and one by one the Ayres family start behaving in a highly irrational manner, and despite Faraday’s treatment he cannot convince them that they are not being haunted and hunted.

Sometimes the best horror movies are also art films, and The Little Stranger is no exception. The filmmaking techniques used in this movie do more than just inform the viewer that this is a story set in Edwardian times. Even the film itself, between opening credits, scenes edited, the film score, all these techniques and elements used here lend themselves to the notion that the storytelling itself was going to take a more “stately” approach in an effort to combat the cliché ghost story that has layers of jump scares. Instead The Little Stranger takes its time in telling its story, slowly building on threads of intensity that ends up pulling the audience in much the same way Faraday is pulled into Hundreds Hall. Director Lenny Abrahamson uses the stiff culture from the Edwardian period to contain the horror so that when he finally does let it loose a bit the result is more than just unsettling.

Then there are the characters themselves. While there are some other male characters, the one with the greatest amount of screen time is Faraday (Domhnall Gleeson), while the remaining members of the cast that make up the Ayres family equally receive almost all of the remaining time on screen. Gleeson’s approach with Faraday has the character so emotionally tied down you’d think he was wearing some type of straitjacket. At first I was led to believe this was just Gleeson’s attempt at showing some of the stereotypical behavior that was expected from proper Englishmen, but there is another, more organic reason that is implied at the end of the film, as to why Faraday is the way he is, and Gleeson never betrays that. Even during a moment where it seems as if he’s liable to break simply from being wound up too tight, he still carries it with a remarkably focused intensity. On the flip side to Faraday are the two Ayres siblings, Caroline and Roderick (played respectively by Ruth Wilson and Will Poulter). At first their behavior almost seems anachronistic in comparison to Faraday until you see the situation that they live in. There is Roderick who is suffering from his injuries, both physical and psychological so naturally he’s somewhat “unhinged,” and then there is the sister Caroline. Despite the fact that Roderick is technically the man of the house, Caroline takes on some of the more “emotional” burdens and responsibilities.

With a mother who could almost be considered elderly, Caroline has to see to many of the day-to-day operations in maintaining what is left of Hundreds Hall, and Wilson shows how it weighs her down. Even as she has her own unexplainable experiences, the burden of the house starts to behave like an emotional vampire. Psychologists today might simply regard it as depression, but Wilson shows that something is haunting her, even when the character of Caroline doesn’t fully realize or accept it herself.

The Little Stranger shows that horror films do not need to rely on the “jump-scare” tactic, but can be very thoughtful when it comes to delivering the chills. If you add to this formula some of the most beautifully shot scenes imaginable, as well as some of the most intensely focused acting ever seen, you then end up with a film that is extremely British in its approach to storytelling (and I mean that as a compliment), as well as treating its audience with intelligence and respect, and that is something which is sadly in short supply when it comes to horror films these days.

The Little Stranger receives 5 out of 5 Hauntings!!!

[Thanks go out to Fingerpaint for the press-screening event for this movie.]