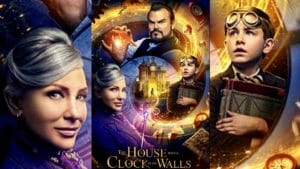 When you were young did you believe in magic? Has there ever been a time as an adult where you saw something amazing and for just a second you believed in magic again, or at the very least, wished that it were real?

Young Lewis Barnavelt has suffered a terrible tragedy in that both of his parents were killed in an automobile accident. As per the mother’s will, Lewis has been sent to live with uncle. Right from the start everything is weird. The house has scores of clocks, and some objects even move under their own steam. In no time at all Louis discovers that his Uncle is a warlock. Later, after young Lewis has pleaded and begged to learn magic, Uncle Jonathan gets him a stack of books and Lewis starts to learn about the arcane arts. Meanwhile, there is something menacing in the house that Uncle Jonathan is searching for and it has something to do with his previous show-biz partner, as well as prior owner of the house, Isaac Izard. To make matters worse, Uncle Jonathan isn’t that great of a warlock, and witchy neighbor, Mrs. Zimmerman, has an emotional block that prevents her from practicing the art herself. There is a serious threat coming that could endanger everyone. Do our heroic trio have the means to defeat that threat, or will all rest on the shoulders of young Lewis?

I had been looking forward to seeing this film as I have a weak spot for family films about magic. Luckily I was not disappointed. From almost the very beginning of this film the production values were absolutely amazing. Set in the 50’s after World War II, much of the downtown area has a wonderfully nostalgic quality to it, but it’s when we enter Uncle Jonathan’s house with Lewis that this movie becomes eye-candy. The production values and set design are truly amazing, which helps to give this movie that sense of wonder. Then, during a truly “magical” moment in the garden of the house is when this movie takes its gloves off and treats us with some wonderful images, including a topiary of a griffin, as well as an image of the universe while Louis walks through it. However, in order for this movie to work there has to be something more substantive, and this movie has it albeit packaged in a manner that was somewhat surprising. By playing with the tragedy that took young Louis’ parents it allowed for a certain vulnerability to be exploited, but it’s not just Louis’ weakness as it happens to be shared in unique forms within our little group. How this is overcome does come off as a bit formulaic, but was nonetheless heartwarming. Then there is the humor. Because Jack Black is in this movie it would be safe to assume that there would be some level of “toilet humor,” and while that specific brand of humor associated with Jack Black doesn’t appeal to me, when it did happen here I found myself laughing hysterically. Lastly, and I only bring this up because it’s something of a sore spot for me, the color palate for this movie was warm and rich. No doubt it was done to heighten the tone regarding the learning and use of magic because the colors looked a little faded during the times when young Louis would be at school, but given that this movie primarily takes place inside Uncle Jonathan’s house we are treated to beautifully rich tones. It almost made me want to find that very house and live in it!

While I’m no fan of Jack Black, he was wonderfully quirky here. However, during a time when the threat is reaching a critical point he shows that he has some acting chops. While he may prefer the loony comedy he’s most famous for, it’s wonderful to see him in a role that stretches him. Then there is his neighbor Mrs. Zimmerman, played by the always beautiful and elegant Cate Blanchett. Mrs. Zimmerman is a woman carrying a very painful burden within her, and Cate nails it. We see the highly intelligent witch that Mrs. Zimmerman is and with all of her wealth of knowledge, yet she expresses something with her eyes alone that hints of something that has made her broken. It’s delightful to see Blanchett in fantasy genre films because actors of her caliber only help to give these types of movies the acting legitimacy, respect, and acceptance that they deserve. Rounding out our little group is young Owen Vaccaro. He held his own quite well against the likes of Black and Blanchett, and when there were scenes that called for him to show some deeper emotions he had no problem in pulling those out. However, it was the scene in the garden when he finally sees the magical representation of the universe that his eyes light up in a way that had me believing what he was seeing. He pulled me into the movie and kept me there throughout his, and everyone else’s, journey.

While The House with a Clock in Its Walls might not be blockbuster fare (which might explain why it was held back for release until now), this is the perfect movie to take the family for 104 minutes of good entertainment. It has brilliant visuals, an excellent cast, some very good humor, and a beautiful message about families. The final scene before the credits roll brought a tear to my eye. It was wonderfully touching.

The House with a Clock in Its Walls receives 4 out of 5 clocks!!!

[Thanks go out to Fingerpaint for the press-screening event for this movie.]