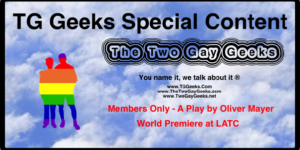 The Two Gay Geeks received this press release form one of our media contacts.

A look at Life, Love, and Acceptance and the struggles involved in the past and through to the present.

Please have a look and if you are in the Los Angeles area plan to see this new work.

Members Only – World Premiere at LATC

A Play by Oliver Mayer

Los Angeles, CA – It’s been over 20 years since BLADE TO THE HEAT sold out the Mark Taper Forum main stage. Members Only follows the surviving characters from BLADE in real time.

Members Only is the long-awaited sequel to the ground breaking BLADE TO THE HEAT – Mayer’s controversial play about a 1950’s nobody-turned-championship boxer forced to confront his own sexuality after a dethroned champion accuses him of being gay. Pop Icon, Madonna had originally bought the rights to the story.

Opening on October 26 at LATC, Members Only is a play about an American of color forging racial and sexual identities to the pulsating beat of Willie Colon and Blondie, on the cusp of discovery, at the edge of a plague.

It is 1982 in New York City: the golden age of boxing, the dying gasp of disco, and the flowering of identity politics.

Pedro Quinn is well past 40 and still fighting, not only for championships but for the right to be himself, on his own terms. He even has a protege, a young female boxer who reminds him of his own youthful fights in and out of the ring. But when a detached retina threatens to end the only life he knows, and when old frenemies Vinal and Sarita want to make a movie about the champion he killed in the ring 20 years ago, Quinn can no longer hide from the ghosts of his past. Nor can he protect those he loves from the specter of hatred, much less the oncoming onslaught of what will soon be named the AIDS virus. He can hide in plain sight no more, and his biggest fight is yet to come.

Mayer believes it is important and relevant to see the message of his play within today’s socio-political landscape.
Seen through the seminal lens of 1982 (and drawing comparisons to 2018), MEMBERS ONLY brings together gay and straight sexuality into the worlds of boxing, dance and bath clubs, film and family.

After the lie was propagated about America becoming a post-racial society, we now see how divided we really are about not only race, but sexuality, gender, ethnicity and simple choice. This play tackles the problem by imagining a time just before AIDS was named, when sexual behavior and identity was open-ended, when people of color were beginning to find equal footing in public as well as private, and when a hopeful, more equal, future seemed possible.

Despite the pain and violence on stage, the message is decidedly hopeful. Life and love are unstoppable, and — as we see in current American politics — the venom of hate and ignorance will not kill us as long as we fight it together. 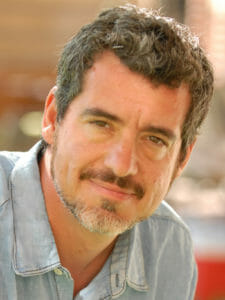 Serving the LA Theater community for over 3 decades, Mayer is one of the most influential faces of the Los Angeles Arts & Theater community.
He continuously excels at delivering socially-engaged artistic creations that ultimately represent a rich historical record of the multicultural landscape of our society and the very socio-politico-economic issues affecting it.

Why Did Mayer write Members Only?
His wife Marlene Forte was a young actress when BLADE TO THE HEAT premiered at The Public Theater in NYC in 1994, but she didn’t have an agent and wasn’t able to be seen to play SARITA. When they got married, she told him how much she wanted to play the role. Since they’re both 20+ years older now, the solution was to write SARITA 20+ years later — hence MEMBERS ONLY!

If he lives long enough, he intends to write the third play of what will be the Quinn Trilogy.

The Latino Theater Company operates the historic Los Angeles Theatre Center, a five-theater performing arts complex in the revitalized Historic Core District of Downtown Los Angeles. Our Mission is to provide a world-class arts center for those pursuing artistic excellence; a laboratory where both tradition and innovation are honored and honed; and a place where the convergence of people, cultures, and ideas contribute to a more vibrant future. We believe the theater creates empathy and educates, has the power to provoke dialogue by illuminating the social issues of our times, and can awaken the collective consciousness of a community to act in creating a better tomorrow.