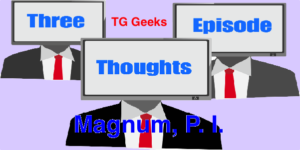 Gini had an opportunity to watch the first three episodes of the new Magnum P. I. on CBS.

In her own inimitable way, she gives us her thoughts on those first three episodes.

Thank you, Gini, for your sacrifice of time. 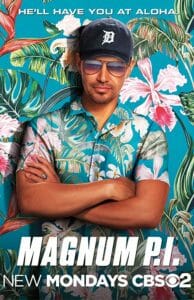 CBS has chosen to reboot a classic show from the 1980’s, the show that made Tom Selleck a star – Magnum, P.I. But is it worth checking out in the here and now?
Honestly? Not really.

In the original, Thomas Magnum (Tom Selleck), a former Naval officer in Viet Nam, was living on a palatial Hawaiian estate owned by Robin Masters (never seen until the last episode). He’s the ostensible security consultant, but Higgins (John Hillerman) who runs the estate feels that Magnum is a layabout. This is somewhat because Magnum spent his 20’s in war and wants to spend his 30’s enjoying himself. 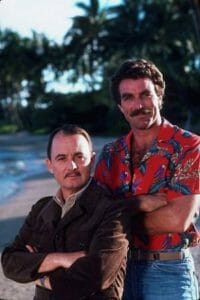 He has two war buddies – T.C. (Roger E. Mosely) who runs a hugely successful helicopter touring business, and Orville “Rick” Wright (Larry Manetti) who is a bartender and the comic relief. Rick’s also suffering from PTSD, so he’s sometimes a little crazy. (He’s not Murdock from The A-Team level, and the term PTSD isn’t used, because it didn’t exist as a term then, but Rick’s war problems are mentioned and you see it with how Rick acts at times. For 1980, it was shocking to have this much representation.)

Magnum solves cases, big and small, driving Robin’s red Ferrari all over beautiful Hawaii, and keeps in shape by running away from Higgins’ Dobermans, Zeus and Apollo, aka The Lads, who hate him and want to use him as a chew toy. 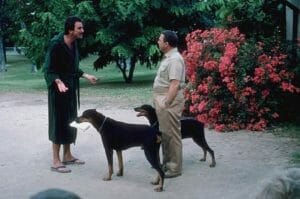 The running gag/mystery is that Magnum has never met Robin. At least two seasons of the show were spent with the “is Higgins actually Masters” question going strong. Higgins and Magnum’s relationship is actually the core one to the show – they start off as adversaries, presumed boss and unwilling employee, turn into stern father and rebellious son, and come out as friends.
Magnum is a slacker before the term came into use. He’s the proto-slacker. But he still gets things done, usually because he wants to help people.

The show was usually breezy but had its serious episodes. Despite what it’s loyal fans would say, it’s not the best show from the 1980’s, even though it was a huge hit and a lot of fun. But what made it work was the four leads, all of whom had chemistry onscreen, alone and with each other.

If only the remake could say the same. 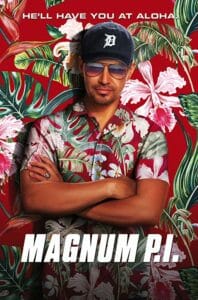 The new version of Magnum is still set in Hawaii, only Robin’s estate is even more palatial. Robin Masters is an author, but he was imbedded with Magnum’s unit in Afghanistan and feels that he owes Magnum for helping keep him alive to write about it all, which put him on the multimillion-dollar map. Meaning there is no Robin mystery.

There are now what seems like a fleet of Ferraris, though, which are constantly being destroyed. The original managed to keep one Ferrari going for four seasons, but the new show trashed three in the pilot. It wasn’t fun, it was just…stupid. 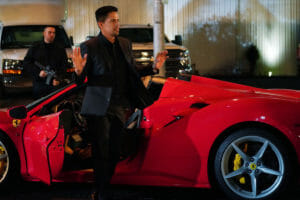 Magnum is now an ex-Navy SEAL former POW played by Jay Hernandez who is attractive but dull. Higgins (Perdita Weeks) is gender flipped to be a female former MI6 operative, though she’s still got Zeus and Apollo and they still want to use Magnum as their favorite chew toy.

As an aside, I have trouble believing a woman is kickass when she’s built like a stick with no muscle tone. Weeks sells it well, as long as you don’t look at her closely during fight sequences, but the moment you do, you’ll be really impressed with the stunt crew for making it look like she could hurt them. The Dobermans, on the other hand, look fantastic. 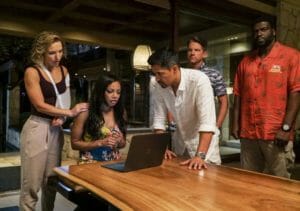 TC is played by Stephen Hill and Rick by Zachary Knighton. TC is still the top helicopter tour dude, but Hill has none of Mosely’s charisma. Then again, it could be because his role is incredibly limited and extremely one dimensional. In this version, Rick has no issues and is the guy who knows everyone, the hustler/scrounger. Knighton gets more to do that Hill, but his role is really to be incredibly convenient. Does Magnum need someone who knows how to reverse engineer plastic surgery? Rick knows a guy! Does Magnum need someone with a lot of tattoos? Rick knows a guy! In other words, there’s no work involved, because Rick will ALWAYS know a guy. Three episodes in and I’m already sick of Rick knowing a guy. 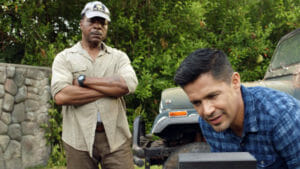 Hernandez – so good and so charismatic as Diablo in Suicide Squad – is doing his best, but he lacks Selleck’s charisma and comedic timing. The original Magnum worked because Selleck could keep things light and breezy and pivot to dangerous as needed. Even when it’s supposed to be light, Hernandez still looks grim. Perhaps because he’s read the scripts.

Everything is exposition. Everything is easy to guess. The voiceover – charming and fun in the original – just seems forced here. Higgins is coming off as a bipolar bitch – one moment she despises Magnum, the next she’s batting eyelashes at him. Sadly, the show is clearly going for the will they/won’t they thing with these characters. Magnum is coming off as a sucker and a loser who somehow manages to solve cases anyway and who also has a treasure trove of “secret pains” for each episode to delve into. 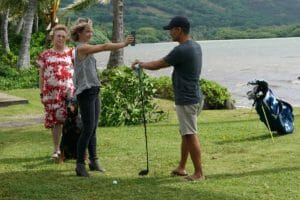 The most interesting characters have been the “fourth friend” from the POW camp (guess what happens to him in the pilot?) and the police detective Tanaka (Sung Kang, who I adore from the Fast and the Furious franchise) who has been promoted to head of detectives by episode three, meaning we’ll never see him again. Replacing him as Magnum’s police nemesis/ally is Tim Kang as Det. Katsumoto. Boring, just like everyone else.

I’d be all excited about there being a show with a Latino lead and actual Asians and Islanders represented on the show, as well as having a black main supporting lead, if any of them got to do anything. Magnum and Higgins are the actual stars, though, and everyone else is very one-dimensional window dressing. Carl Weathers has been the top guest star of note so far and was given almost nothing to do. 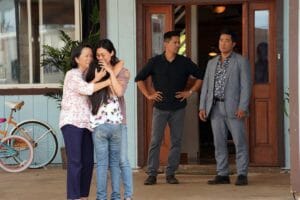 All this said, there is nothing objectionable about this show – it hits its marks as it’s supposed to and if you think Hernandez or the rest of the cast are attractive and/or you like really easy, totally non-twisty mysteries, it’s an okay way to waste an hour. But there’s nothing interesting about it, either. The third episode was far more engrossing than the pilot and the second episode, but I could guess, easily, who the real bad guy was and what was going on, far faster than Magnum, so “engrossing” is probably not correct. “Less boring” might be the right description. I did actually laugh at something in the third episode – something I was supposed to laugh at – so there may be hope. I just won’t be watching to find out.

If you want good mysteries with a great, charismatic cast, watch Elementary. If you want an attractive cast that can act…wow, there are so many options, but I’ll point right back to Elementary for starters and go from there. If you want a military show with a handsome Latino lead, watch SEAL Team. Asian cast? Fresh Off The Boat. If you want a fun show set in a beautiful location with attractive leads who have charisma and can act, Netflix has saved Lucifer.

If you want a reasonably pretty cast in a gorgeous locale with unchallenging plots and just enough talk to keep you awake, however, the new Magnum P.I. could be for you.