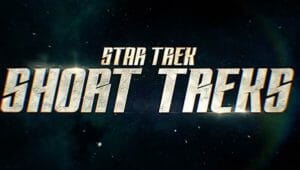 Back in 2016 CBS took the entertainment world by storm when they announced the return of Star Trek to the small screen. However what followed through Press Releases as they announced the series details was another matter entirely. By the time the series finally premiered in the fall of 2017, it was learned that the series was only to be made available on the CBS Streaming subscription service for people in the US, while in other countries it could be found on Netflix since they were signing as a co-production company. The series would only be 13 episodes long, set in the past prior to the time of the original series, would take place in the “Prime Universe” (meaning same as all of the other live action TV properties), and would be highly serialized as if each episode served as a chapter to book, which is a bit of a difference than creating a story-arc season with each episode being able to largely stand on its own legs. Also, because of the advancement of production technology they would be redefining the look of the series (which has been to date one of the most controversial aspects of this series). Characters were mentioned and before the series would premiere it would see some serious shakeups in terms of show-runners.

When the first season aired the level of controversy was so severe that it quite literally split fandom in two. Many Trek fans lauded the series as being one of the finest things they had ever seen, while others derided it claiming that it was enjoyable sci-fi, but in no way shape or form is truly Star Trek. While we here at TG2Studios have our own opinions on the subject, we will leave it to you to come to your own conclusions regarding this series. In any case, the first season aired and finished in the spring of 2018, but the new season wouldn’t start until January of 2019. So, to whet the appetites of fans, and to give some new content until the series would return for its sophomore season, CBS created four short episodes, each approximately 15 minutes and each with a very specific focus, and they were Runaway,Calypso, The Brightest Star, and The Escape Artist.

Due to the events of the first season and the Discovery’s voyage into an alternate, “mirror” universe, Ensign Tilly has decided to enroll in the Command Training Program. Her mother does not look upon Tilly’s decision favorably during a communiqué with her. After they finish speaking she finds herself alone in the mess hall when the food synthesizers go mad, and then learns she is not so alone as she originally thought. She escorts her new “friend” to her quarters and, through the use of the communicator’s universal translator, learns all about this new person and why she is now on Discovery.

This episode really tricked me. Just as I thought it was going to go in one direction it took a sudden turn and became something else. The details regarding Tilly’s “visitor” are slightly confusing, but nonetheless interesting. This episode presents us with a unique situation that could provide some amazing universe building. Nonetheless, this is more about Tilly and her personal revelations during the time she is with this new friend. In the end I absolutely loved this short trek. If there was anything that I loved about the previous incarnations of Star Trek it is about the characters and their development. Even in action oriented pieces such as Balance Of Terror from the original series, or Next Generation’s spectacular cliffhanger episode The Best Of Both Worlds, these stories told us about the characters we love and the growth they go through. This has been at the heart of other Trek shows and it was very much present here.

A single occupant spacecraft is badly damaged and ends up being rescued by Discovery. The occupant is taken to sickbay where he finally comes to and finds himself utterly alone, except for the voice of a very friendly female. He makes an unusual “discovery” (sorry, pun not intended) about his benefactor and after a time decides it is time to try and return to his home world.

This was the oddest of shorts. While Runaway clearly takes place sometime between seasons 1 and 2 of Star Trek: Discovery, this short takes place way outside the established timeline making it a true anomaly. Of course if this episode is to take place on Discovery, and if the desire is to make it a two-character story, then the reasoning for putting the story during this particular point in the timeline becomes necessary. The sad part is that a truly intriguing element of this story now has to be sacrificed. While the situation between the survivor and his rescuer is an intriguing one, there is without doubt a huge backstory that begs to be told, and it’s so big that it almost took me out of the viewing experience. I did enjoy what was being told between our two primary characters, but I would have enjoyed it even more so had there been some proper explanation as to how Discovery ended up in this predicament.

On the planet Kaminar we meet the rest of the species of which First Officer Saru comes from. They are extremely primitive and even superstitious to some degree. Saru’s father is a High Priest, and he, along with Saru and his sister serve something only known as the Baul. People from their “tribe” are routinely sacrificed (although we truly don’t know what happens to them aside from disappearing) and in return they are given good crops by which they can survive in relative comfort. Saru finds a piece of alien tech, and though his father tells him to dispose of it, Saru is too curious and wants to know more about it and the worlds beyond the stars. Once he actually gets it functioning he finds that his life is about to change in ways he never possibly imagined.

This has been regarded as another somewhat controversial episode, but one that I actually enjoyed. As stated earlier, I love episodes that have their characters on some sort of journey, and this is part of Saru’s trip to how we see him leave his primitive home and embrace something larger. However, one of the shortcomings of this episode is that it’s too short, forcing it to take some drastic shortcuts in order to make its point. These shortcuts help to create some serious violations in Trek canon regarding contact with a pre-warp species and the Prime Directive. This very point was far better handled in The Next Generation 1991 episode First Contact. Nonetheless, it was nice to see how Saru handles his situation and how both his curiosity and ingenuity mark the beginning of his race’s evolution and their eventual journey to the stars.

Harcourt Fenton Mudd now appears to be in a new hot mess of trouble. After being delivered by a masked character to a Tellarite bounty hunter, Harry is now going out of his way to try and talk the Tellarite into letting him go before he’s delivered into Federation hands.

Easily the simplest of premises to list here, but this episode has some good twists to it. While I didn’t care too much for Rainn Wilson’s take on Harry (How do you live up to the insanity of the late Roger C. Carmel?) during his initial appearance of season 1 of Star Trek: Discovery, this short take felt like a true return to the conniving antics that made Harry so infamous. There is a need to have a slight suspension of disbelief in order for the punch-line to be adequately delivered and received, but this gave us the young Harry Mudd story that so many fans had been clamoring for. To say anymore would spoil it for those who have not yet watched it.

So here we have the four Short Treks that will take viewers into season 2 of this series. Despite the flaws that these shorts had, what they were most definitely not lacking in was heart. That is what I loved most about Star Trek in all of its previous incarnations, and while I admittedly did not care that much for season 1 of this series and some of the artistic licenses that it took, it’s my hope that these four shorts indicate a new direction and possibly even a reinvention for a new and enjoyable season of Star Trek: Discovery.