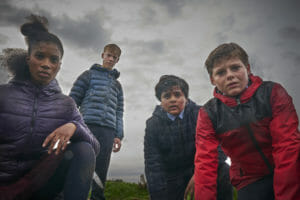 The Kid Who Would be King is anything but another redux ala Camelot.

Official Synopsis: Alex (Ashbourne Serkis) thinks he’s just another nobody until he stumbles upon the mythical Sword in the Stone, Excalibur. Now, he must unite his friends and enemies into a band of knights and, together with the legendary wizard Merlin (Patrick Stewart), take on the wicked enchantress Morgana (Rebecca Ferguson). With the future at stake, Alex must become the great leader he never dreamed he could be.

This ensemble cast is funny and off-kilter without being obnoxious. The story is campy with just the right touch of the comedic. Although it would’ve served the film to provide a deeper glimpse into the lives of each kid questing across the country-side, what development we do get is relatable and realistically (even when nothing else is) in service to the greater action at play. The magical elements are used mostly put great use if seriously cliched when it comes to representing Morgana (it would be nice if people would stop treating this woman like a she-beast already) and the role she plays in the story.

Writer-director Joe Cornish blends school-age angst and Arthurian legend into a tale of a boy least-likely and the return of a mythical sword. Surprisingly enough, it turns into a film for the entire family by being only slightly heavy-handed in it’s messaging and thoroughly entertaining from start to end. Smart decisions and an able cast of characters turn what could’ve been a hot pile of boring into a better than expected road film turned quest to save the world. It’s a journey of self-discovery that showcases basic examples of the Golden Rule by introducing kids to chivalric code as the stories twists and turns force a group of kids to mature and face hard truths about themselves all while being guided by a less than perfect wizard – played excellently by both Patrick Stewart and Angus Imrie – as they turn legend on it’s head.

The only real downside comes in the third act. After all the build-up the ending battle sequences fall out of the rhythm set by the rest of the film. This is a story that didn’t want to rely on adults for it’s fun or flavor but went too far in pushing them into the background…literally. That’s a very adult complaint, that I heard from a child. So I suppose the moral of the story is, not even kids believe its fair to put all the pressure for saving the world on them. 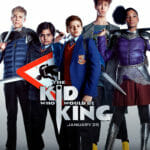 News Sushi #96: Morsels of News from Japan and Beyond