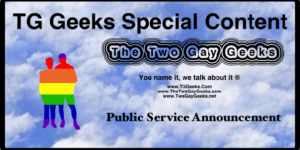 The Two Gay Geeks received this press release from One Community in Phoenix.
(Press release duplicated as received)

Being part of the LGBTQ Community, we feel very strongly about this issue.

Please have a read and if you are in Arizona, lend your support to the legislators and One Community. 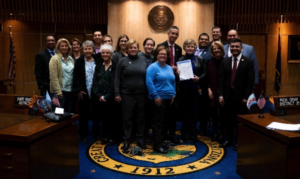 “LGBTQ inclusion isn’t a red or blue issue – it’s an Arizona issue. Being inclusive contributes to our economic sustainability and our ability to attract and retain top talent and business. It also happens to be the right thing to do,” said Senator Bowie.

“The principles of non-discrimination are rooted in core conservative values of fairness, equality, and opportunity. If we want to live in a state that grows by attracting the very best talent, has a strong economy, is a vibrant place to live, then we must be open for business to everyone,” said Senator Brophy McGee.

“This isn’t about special treatment, it’s about equal treatment. It’s about opportunity for all. Nobody should have to live in fear of being fired, denied housing, or denied services simply for who they are or who they love,” said Representative Hernandez.

Currently, only six municipalities have ordinances that ban discrimination based on sexual orientation and gender identity, and Arizona has no statewide laws that protect gay and transgender individuals from being fired, denied housing or refused service.This limits Arizona’s ability to attract and retain top talent and business, hurts its national and global image, and damages overall economic sustainability, which is why an update is strongly supported by the business community. More than 3,100 businesses in Arizona have already voiced their support for LGBTQ inclusive non-discrimination by signing the UNITY Pledge. Further, 90% of Arizona’s top 50 employers include sexual orientation and gender identity in their non-discrimination policies. Further, a recent statewide poll showed support for inclusive non-discrimination at over 70% in the areas of employment, housing and public services among likely general election voters.

Faith leaders are also supporting the measure, “My faith teaches us that we are all God’s children, and that we should treat others the way we want to be treated. The legislation will simply update Arizona’s existing laws to ensure that our LGBTQ citizens are all treated equally and fairly,” Reverend Troy Mendez, Dean of Trinity Cathedral added.

ONE Community is the member-based coalition of socially responsible businesses, organizations and individuals who support diversity, inclusion and equality for all Arizonans. We are committed to reshaping Arizona’s image through educating, empowering and connecting our diverse LGBTQ and allied communities on the benefits of inclusion and its direct impact on attracting and retaining top talent and businesses—and thereby, ensuring our state’s economic sustainability.

Your thoughts and opinions are important to us, so please leave a comment in the section below the article, and if this is your first time visiting please be sure to read the Privacy / Terms and Conditions Of Use.And Please, Play Nice!