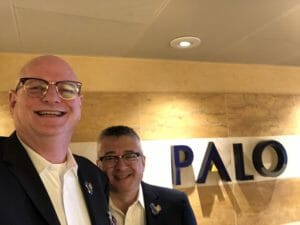 The Two Gay Geeks make no apologies for being Disney-philes, from our Disneyland Annual Passes (our cars can drive themselves to SoCal) to our house full of Disney art and memorabilia we love most all things Disney, and among those things are the Disney Cruise Line. Thank you Teresa Cory of Fairy Godmother Travel and the folks of Micechat for introducing us a number of years ago. We have managed to sail on all four Disney Cruise Line ships with the Magic being the last and most recent ship we sailed during our December vacation.

One of the nice things about the Disney ships is the number of things they have for adults including a fine dining experience at Palo, featuring Northern Italian cuisine. Palo is located on the top deck in the aft of the ship. The Magic and the Wonder only have Palo, but the Dream and the Fantasy have not only Palo but also Remy, a restaurant featuring exquisite French food. We usually try to have Brunch at Palo or Remy when we sail. They only open for Brunch on days at sea so it can be a trick to get in. The food and service at dinner are magnificent, I just prefer Brunch as you will see in a moment. 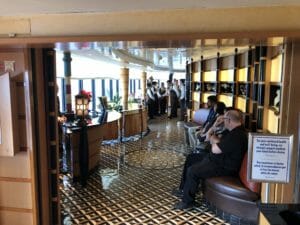 Palo has a dress code of dress shirt and pants for men, tie optional, and we usually wear a jacket just because. You get to Palo by a singular elevator or walk up the short flight of stairs to the top deck. Once on the top deck by elevator or stairs, you can tell it is a different experience with nice wood paneling and blown glass vases adorning several key spots along the way. The entry way is spacious with a nice couch for waiting. The Manager greets you and selects a server who takes you to your table. Our table happened to be in the center of the dining area against the back bank of windows that surrounds the back of the restaurant offering a fabulous view of the ocean (reason 1 for choosing brunch). Since it was our server that seated us, he provided us with a menu and took our drink order. We chose iced tea and a complimentary mimosa (reason 2). 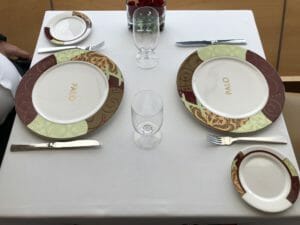 This being Brunch the menu was limited to about five or so items. I chose the Lasagna and Ben chose the Eggs Benedict (what else). More on those items later. We were then shown to the several elaborate setups of various Brunch Foods. There were four (plus) different stations for different types of food (I forgot to take photos of all of the stations). There was the seafood station that had split crab legs, jumbo shrimp, salmon mousse, and even caviar, among many other items. The deviled eggs were an especially delightful treat. Smoked Salmon and all of the accouterment was present as well. 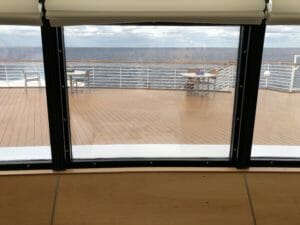 My favorite was the cheese and meat station. I was in heaven, with five different types of meats to choose from and then there were four different cheeses on this station and three on another station, as well as one whole hollowed out Parmesan Cheese wheel filled with chunks of the Parmesan itself. I believe my favorites were the Blue Cheese as it was very sharp (as I like to say the sharper and stinkier the better) and the Aged Gouda. This was no ordinary Aged Gouda, it was so smooth and rich tasting with a nice saltiness from the aging process. There was a nice selection of breads on another station to go with all of the wonderful things to put on top. There was a nice selection of fruits and fruit spreads to accompany the chesses and breads. The fig spread was divine. Did I mention they had Risotto Balls? Oh my, what a nice treat, they were still warm from being fried and were wonderfully creamy on the inside. 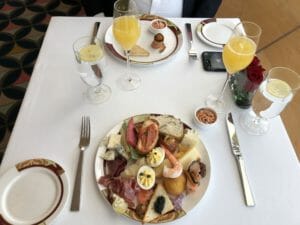 I did try to restrain myself from not indulging too much on the appetizers, if you will, since I had lasagna coming and a whole station of desserts that I only glanced at. The lasagna was served in a bowl surrounded by just enough of the sauce that had settled out of the noodles and topped with what I believe was flash fried seaweed (?). Whatever it was it complimented the lasagna. The noodles were soft yet firm and the sauce was so delicate and subtle. So many lasagnas tend to be in your face with a robust flavor but this was perfection in a mouthful. Just the right amount of cheese inside and on top browned until it was just right. I asked to speak to the chef when he had a moment to ask how he achieved such a delicate flavor. He said time, you just slow cook the sauce with the meat for many hours and then more time in the oven. It was definitely worth it to order. 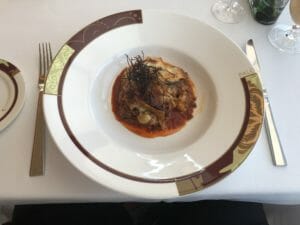 After that was done, it was off to the dessert department. Oh my Lord, there must have been twenty different selections. I do love dessert (it takes a lot to keep up this figure, you know) but, the number of options overwhelmed me. I settled on one of the sticky buns and sauce, a tiramisu (I have a weakness), a nut torte, the Italian fruit and nut bread, and the other thing on the plate (I have no clue what they were but, they were good). And since we are Gold Castaway Members we got a complimentary lava cake. As the lava cake was being delivered I hear over my shoulder a lovely English accent say, “Oh my that looks intriguing!” I turn around and there is a lady (Madeline, who we kept running into after that) sitting by herself finishing her tea. Of course, I will talk to anybody (I even talk to strangers in elevators. The horror!) so I engaged her in conversation and we eventually convinced her to pull up a chair and join us for coffee and dessert. I am sure the staff were wondering when in the heck we were going to release both of the tables because we sat there another 45 minutes or so just regaling each other with stories and chit chat. It was a delightful end to a marvelous meal. 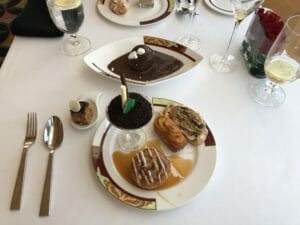 Thank you to the staff of Palo and our guest, Madeline, for making our Brunch experience one to remember aboard the Disney Magic.