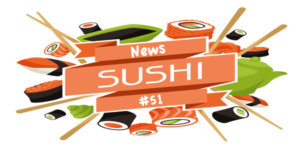 Welcome back to News Sushi… and have we got a bumper week for you!

Here’s the continuing series “The Wheel”. This week a foggy Odaiba evening is the backdrop for a tense first meeting between a 17 year old young woman and her 33 year old father. Confined in a Ferris wheel for 16 minutes with nothing to do other than talk, the two are forced to face their past as well as their future.

Christopher McCombs stars as the Father in this episode, as well as providing the story, which was directed by Tomori Tsubasa.

Also continuing from last week, is part 2 of “Metal Fiction”.

I was running late for work a couple of days ago, and I decided to put my trust in google maps, which said that my place was equidistant between two stations. So, I thought if I ran to the stop closer to my workplace, I could catch the train on the way to work (which also happens to be part of my train pass). Well, guess what google maps? There’s a dead end where you said there was a path! I did manage to get to that station… but, as there was a fence between me and the platform, I couldn’t catch the train. Now, with even less time, my only option was to run back home, and go to the other station. With all that adrenaline, I managed to get to the station, and get to work only five minutes after I really should have been there (which is still with 10 minutes to prepare for my first lesson). Now, my legs are barking like crazy. I guess all that exercise will help me lose weight!

Feel like a Beer? We have Gay in a Bottle.

"Do you have #Gay on tap?" • "Nah, man. Bottle only." • #TradeMark #Vintage #Fetch #StopTryingToMakeFetchHappen

I remember about twelve years ago now, when I returned from Australia after the company I worked for went bankrupt. I wasn’t planning on coming back to Japan, but life had other plans. Just about every job I went for, they told me that I talked about Japan too happily and that they thought I wouldn’t stick around at their job. The only job I could get was at a telemarketing centre promoting independent gyms in New Zealand! But, it was a job, and it helped me save up to go back to Japan (I got the message from the universe – Australia doesn’t want you). So, I came back to Japan, and I’m glad I did, as that’s when I met Paul Leeming, and all my dreams started coming true.

But, there are ghosts of the past here. Like in the urban ruins that we film horror films in. Or in the stories that Japan uses to deal with the past. That run from “Godzilla” to “Merry Christmas Mr Lawrence” to “Ringu”. It’s been over 21 years since RINGU premiered… here’s the sad story behind the character of Sadako’s name…

Thanks to Pablo for sharing this story. I think it makes Ringu all the more interesting and deep.

But, we have to look to the future.

And protect what we have.