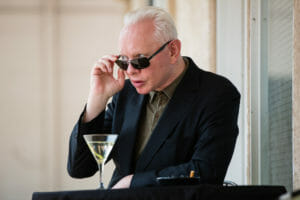 Joe Jackson is partially to blame for a lot of the beatings I got in high school.

While most of my friends were rocking out to Rush, Iron Maiden, and Motley Crue, I was more enthusiastic about how the cover of Body and Soul was a cool throwback to the cover of Sonny Rollins, Vol. 2 and how Joe had recorded Big World live but asked the audience to be quiet during the entire performance – the logic being the interplay of a live band captured something Joe liked that he simply couldn’t grab in a studio setting. In short, he’s always been a bit of an anachronism and an innovator, and I’ve always loved him for it. That love didn’t always translate to my contemporaries who were more enamored of how bitchin’ that riff on “Looks that Kill” was. 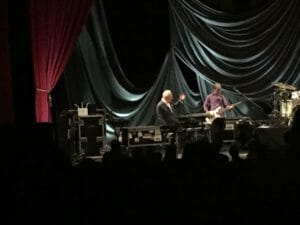 The blur in the middle is Joe Jackson. The blur next to him is bassist Graham Maby.

Despite my four-decade love of the man and his music, I’ve never had the opportunity to see him perform live until his performance at Phoenix’s Orpheum Theater this past week.  Wherever I was, his tours weren’t, and I figured it would just be one of those things where I could content myself with a new album every year or so. Still, I did my best to be a good apostle and spread the word as best I could. Back when I played in bands on a more regular basis, “Is She Really Going Out With Him?” was my moment on lead vocals, and if I felt like I could ever truly match Graham Maby’s bass prowess (yeah right!) I might have pushed for us to cover a few more of Joe’s tunes. This 2019 tour, in celebration of that aforementioned four-decade career he’s had in music (no easy feat) as well as to promote his new album Fool, provided an opportunity to finally see one of those people we like to say “provided the soundtrack to my life” (maybe not your life, but certainly mine), and I couldn’t let it pass me by.

Opening with “Alchemy” (off the new album), each member took the stage one at a time, Joe of course showing up at the end. It didn’t take long for the group to jump into “One More Time” (off Look Sharp!) spanning the bookends of Jackson’s career in reverse – the latest song reaching back to one of his first. The plan for the overall show was to focus on one album from each of the past four decades – Look Sharp! (70s), Night and Day (80s), Laughter and Lust (90s), and Rain (00s) – as part time capsule and part time machine. “Is She Really Going Out With Him?” moved into “Another World” (off Night and Day) which then jumped to a few tracks from the new album which held up really well against his older, more well-known material. The big moment for me, however, came with the opening strains of “Real Men”, a song that’s always been near and dear to me. As Jackson cried out “What’s a man now?/What’s a man mean?” guitarist Teddy Kumpel took over the high notes of the chorus while Doug Yowell broke a few drumsticks along the way. It’s a passionate song, still as relevant today as when it was written in 1982, and the entire group brought that passion home to give the song what it deserved. For me, the show could have ended there, but we weren’t even at the midway point.

“Stranger than Fiction” and “Drowning” from Laughter & Lust followed, the latter another beautiful slow number where Jackson and his keyboard pretty much took center stage. “Cancer”, another favorite of mine from Night and Day, showed up after Joe talked for a bit about writing the song in New York after falling in love with the city’s Latino music scene that existed along side the new wave emergence of bands like Talking Heads. “Citizen Sane” and “Wasted Time” (off Rain) followed, and after returning to Look Sharp! for “Sunday Papers”, Joe ran the band through some songs not off the featured albums – including a cover of Steely Dan’s “King of the World” which provided Kumpel an opportunity to pay homage to the late Walter Becker (which he did beautifully) – followed by “You Can’t Get What You Want” off Body and Soul, “Ode to Joy” from Fast Forward, and finally closing out the show with “I’m The Man” off the eponymous album, which brought the audience to their feet. 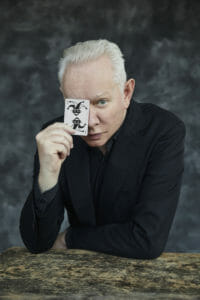 Promotional photo for Joe’s new album, Fool. Pick it up.

It’s worth noting at this point that what Jackson didn’t play says as much as what he did. Nothing off Beat Crazy, Big World, Blaze of Glory, Heaven & Hell, Volume Four, Night and Day II, Jumpin’ Jive, or Will Power made the setlist. It’s not ego that propels Jackson and the band to celebrate four decades of his career (although maybe it is…during one break Jackson mentioned that anyone willing to get up on a stage is doing it for applause. “We’re whores!” he said as the audience gave him, Maby, Kumpel and Yowell what they were after).  It’d be tough to please any fan completely. We all have our favorites and – while I doubt any of us would have minded – if Jackson and crew had tried to play all of them, we’d have been there several more hours than the venue would have allowed.

An encore of “Steppin’ Out” (perhaps his best-known song) and “Got the Time” followed, with “Alchemy” closing the show as it had begun. It had taken me forty years to finally see this man whose music had provided such a huge part of my life, and he didn’t disappoint in any way. I’ll likely be listening to his music until the day I die, and “Shanghai Sky” (off Big World) will be played at any funeral service or wake I might have. Hopefully you’re not a “fool” (pun intended) that waited this long to see one of your personal idols. If you are, this tour is a golden opportunity to rectify that situation.