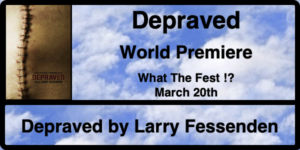 The Two Gay Geeks received this press release a few days ago from our friends at EG PR. I waited since a trailer was soon to be released. The trailer is attached here.

Depraved will premiere at What the Fest !? in New York City.

Have a look at the press release and the trailer and let us know in the comments what you thin. 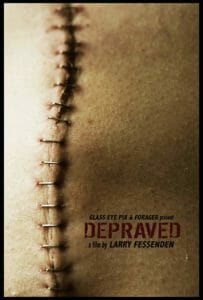 Shot on the 200th Anniversary of Mary Shelley’s FRANKENSTEIN, veteran genre writer-director Larry Fessenden’s brings his unique vision of the literary classic in DEPRAVED, set in modern Brooklyn. This meditative reimagining of the novel explores the crisis of masculinity and ideas about loneliness, memory and the subtle psychological shocks that shape us as individuals.

Alex (Owen Campbell) leaves his girlfriend Lucy (Chloë Levine) after an emotional night, walking the streets alone to get home.From out of nowhere, he is stabbed in a frenzied attack, with the life draining out of him. He awakes to find he is the brain in a body he does not recognize. This creature, Adam (Alex Breaux), has been brought into consciousness by Henry (David Call), a brilliant field surgeon suffering from PTSD after two tours in the Mideast, and his accomplice Polidori (Joshua Leonard), a predator determined to cash in on the experiment that brought Adam to life. Henry is increasingly consumed with remorse over what he’s done and when Adam finally discovers a video documenting his own origin, he goes on a rampage that reverberates through the group and tragedy befalls them all. 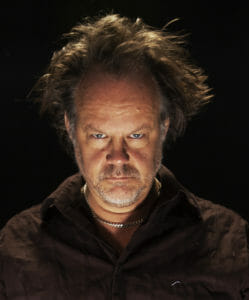 LARRY FESSENDEN (writer, director, producer, editor), winner of the 1997 Someone to Watch Spirit Award, and nominee for the 2010 Piaget Spirit Award for producing, is the writer, director and editor of the award-winning art-horror trilogy HABIT (Nominated for 2 Spirit Awards), WENDIGO (Winner Best Film 2001 Woodstock Film Festival) and NO TELLING. His film, THE LAST WINTER (Nominated for a 2007 Gotham Award for best ensemble cast), premiered at the 2006 Toronto Film Festival and is in the permanent collection of the Museum of Modern Art. Fessenden directed SKIN AND BONES for NBC TV’s horror anthology FEAR ITSELF and the feature film BENEATH for CHILLER FILMS. He wrote the screenplay with Guillermo del Toro of ORPHANAGE, an English language remake of the successful Spanish film EL ORFANATO. He is the co-writer with Graham Reznick, of the hit Sony Playstation videogame UNTIL DAWN which won a BAFTA. As a character actor Fessenden has appeared in films such as the forthcoming THE MOUNTAIN (Rick Alverson), IN A VALLEY OF VIOLENCE (Ti West), BRINGING OUT THE DEAD (Martin Scorsese), BROKEN FLOWERS (Jim Jarmusch), THE BRAVE ONE (Neil Jordan), ANIMAL FACTORY (Steve Buscemi), WENDY AND LUCY (Kelly Reichardt), as well as dozens of independent horror films including WE ARE STILL HERE, YOU’RE NEXT, I SELL THE DEAD and TV shows including “Louie” and “The Strain”. Since 1985, Fessenden has run GLASS EYE PIX (“one of the indie scene’s most productive and longest-running companies”- Filmmaker Magazine), the fierce independent NYC-based production shingle with the mission of supporting individual voices in the arts.


ABOUT WHAT THE FEST!?

Launched by IFC Center in 2018, What The Fest!?spotlights smart, bold and inventive films from the world of genre and beyond for an audience of the creative and curious looking for a community in which to share experiences and have a blast together. From cerebral shockers to singular cinematic moments to unforgettable special events, What The Fest!? is more than just movies, it is an experience.What The Fest!?is an annual event taking place March 20 – 24, 2019 at the IFC Center, bringing cerebral genre films to the big screen in the heart of Manhattan. Showcasing a small range of carefully selected films from the wild side of cinema with guests and special events to highlight the films in a new way, it is the weekend not to miss for cinema lovers who are looking for the next cool thing.

Glass Eye Pix (“one of the indie scene’s most productive and longest-running companies” —Filmmaker Magazine) is the fierce independent NYC-based production outfit headed by art-horror auteur Larry Fessenden (DEPRAVED, BENEATH, ABC’s of DEATH 2, NBC’s Fear Itself episode “SKIN AND BONES,” THE LAST WINTER, WENDIGO, HABIT, NO TELLING). Glass Eye Pix is responsible for narrative films, documentaries, books, comics, audio plays, and other unique work designed to inspire and contrast with corporate media. Fessenden (winner of the Someone to Watch Spirit Award) has operated the company since 1985, with the mission of supporting individual voices in the arts.
For more information: http://glasseyepix.com
Twitter: @GlassEyePix
Instagram: @GlassEyePix
Official Site: https://www.depravedfilm.com
On Facebook: https://www.facebook.com/glasseyepix