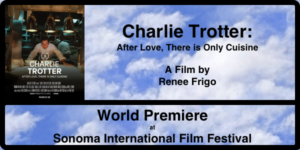 Being a foodie, this film looks very interesting. And also, having heard about this man over the years, makes it even more interesting.

Let us know what you think in the comments below. We always welcome your feedback. 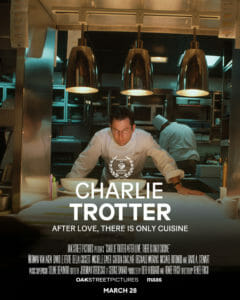 CHARLIE TROTTER: After Love, There is Only Cuisine

A film by Renée Frigo

Renowned chef and restaurateur Charlie Trotter didn’t come from a food-focused family, attend culinary school, or start working in kitchens when he was 14. It wasn’t until college that Trotter discovered his passion for fine cuisine with the help of a roommate who loved to cook. He taught himself the craft of cooking through practice, reading cookbooks, eating in the best restaurants, working under great chefs, and traveling. Touted as the first celebrity chef, Charlie Trotterpioneered fine dining as a culinary artist whose fare was famous for its ability to “hit the head before the stomach.”

Born and raised in Chicago, Trotter had a serious case of dyslexia, but never masked this challenge — often giving it credit for helping him see food in a different light. He came to recognize cooking as a boundaryless art and famously compared cooking to an improvisational jazz piece in that as two riffs will never be the same, so too with food.He had no signature dishes as other chefs did, in fact one of Trotter’s most loyal customers famously dined at the restaurant over 400 times and was never served the same dish twice. The juxtaposition of his ingredients were astonishing, and his non-traditional method of pairing food to the wine — versus pairing wine to the food — is still considered revolutionary today.

Charlie Trotter: After Love, There Is Only Cuisine from Oak Street Pictures on Vimeo.

Trotter opened his namesake restaurant, CharlieTrotters, in 1987. During its 25-year tenure, he ruled his restaurant with exacting standards. Ever the artiste, the customer was not always right. Stories abound of Trotter emerging from the kitchen to confront customers who had failed to finish everything on their plate. The kitchen welcomed over 800 aspiring cooks, and many cite Trotter for cultivating the discipline, skill and curiosity integral to their culinary careers. A 10-time recipient of the James Beard Award, Trotter was also the host of the 1999 PBS cooking show, The Kitchen Sessions with Charlie Trotter, wrote over 14 cookbooks and promoted a line of organic and all-natural gourmet foods distributed nationally.

The documentary short Charlie Trotter: After Love, There Is Only Cuisinegives viewers a backstage pass to this extraordinary kitchen. The film deftly highlights his unique connection between music and cooking, and provides intimate insight into the mind of this creative genius. With commentary from many who knew him, including Dave Stewart of the Eurythmics and Charlie’s best friend, Chef Norman Van Aken, the many layers of Charlie Trotter unfurl.

Charlie Trotter: After Love, There is Only Cuisine is directed by Renée Frigo of Oak Street Pictures. Frigo and her Oak Street Pictures partner, Beth Hubbard, produced the short. Frigo first met Trotter when she walked into his Chicago restaurant in 1998 and presented him with a bottle of her Lucini extra virgin olive oil. Discover more about her history with Charlie in this charming animated piece:

A Tribute To Charlie Animation from Oak Street Pictures on Vimeo.

Charlie Trotter: After Love, There is Only Cuisine premieres at the Sonoma International Film Festival on March 28. The first screening will be at the ‘Chefs and Shorts’ dinner event, where chefs will prepare courses inspired by the films presented. Preparing the dessert course will be two pastry chefs who worked with Charlie at Trotter’s— Chef Michelle Gayer, co-author of Charlie’s dessert book, now at Salty Tart in Minneapolis and St Paul, and Della Gossett, now at Spago Beverly Hills.