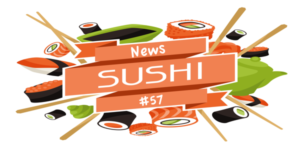 Time is a construct.

No, I am not trying to make an excuse for being late.

Yes, I do apologise to Ben and Keith for this being late… 🙁

Hot Springs in the Caves of the Kii Peninsula

I recently got the chance to revisit Katsuura in Wakayama’s Kii Peninsula (not the one in Chiba, which is also awesome) for “J-Trip Plan” on NHK-World. We go to the Hotel Urashima, which has two cave onsen, as you can see below.

The link to the program isn’t up at the time of writing (it’s still being shown on TV), but should be up here by the time this is published:

For anyone who missed my debut, here’s the link to my first episode:
https://www3.nhk.or.jp/nhkworld/en/ondemand/video/2059054/

So, can I say that I’m a travel reporter now? I’ve been paid to do it twice now. Let me know in the comments.

In Japan a project has been launched to create sushi using 3D printers. The major advertising agencies Dentsu and auto parts maker Denso are working together on making it possible. We can see the results below:

I’m not sure this is a future that I want to live in, but it sure is interesting.
Read more here: https://www.nhk.or.jp/ohayou/biz/20190325/index.html

Speaking of the future, the Japanese Government has announced the name of the new era after the current Emperor abdicates at the end of the month. It’s Reiwa, and the internet is abuzz with reactions. My coworkers have basically said that they dislike it. My partner hates it. But, according to the government, it has 79% approval. So, who knows. I guess it’s something that we’ll all have to get used to.

The editor of my film did a great video asking regular Japanese people what they would name the new era, and I think they have some great suggestions:

So, here are a few reactions to the name so far…

Famed expat journalist and author of “Tokyo Vice” has this to say:

BREAKING NEWS:
Japan's new Imperial era is a throwback to Imperial Japan and the facist past! Way to go!
Here it is:令和 (REIWA) "Peace by order"
I told you it would a fascist vibe.
命令 (an order) の令and 和 (peace)
Also 逮捕令状 (as in an arrest warrant).

Of course, the name of the new era is the same name as a real estate agency in Perth, Australia.

70 per cent of traffic to https://t.co/ZPIkNJ1DSb today were from people in Japan, mistaking the real estate portal for their country’s new imperial era. #reiwa https://t.co/auvYG2jAzs

Which considering it’s the world’s most remote major city, it’s unfair to think that the Japanese government would consider this. The name apparently comes from Japanese poetry.

Of course, this is going to be a long era of Eric Clapton jokes…

Which for those who can’t read Japanese, reads “reiwa”, which in Japanese sounds a little similar to “Layla”…

Back to shameless self-promotion… the film I help produce got it’s Cast and Crew screening recently in Kyoto, and the following is the photos from the night. Wish I could have been there!

Amy shows us her true colors in the third episode of Till Death. Death and Amy continue to follow Amy as she turns to her estranged cousin Jo for a place to stay. Jo grudgingly agrees and performs the killer dance track “Ta Ra Ra Boom De Ay.”

“I’m not nice in any language, honey”

Hot Link of the Week

That’s all for this week!