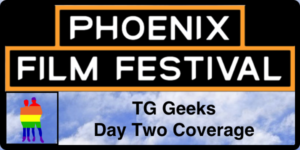 Now with the Opening Night festivities out of the way it was time to get down to some serious movie watching, and for Friday April 5 2019 we had the chance to immerse ourselves in 4 independent feature films. Two of them were received pretty much as I hoped they would be, while the other two turned out to be incredibly surprising; one of them a happy surprise, the other was a disappointing surprise. 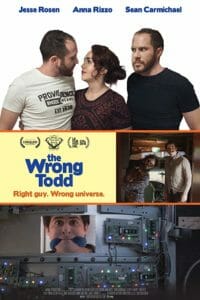 Todd is a rather likeable fellow with his friends, and he has a lovely girlfriend named Lucy. He’s just a bit stuck in his own ways, which pleases his best friend Dave, but doesn’t appeal that much to Lucy. However his world changes when another guy named Todd, who happens to look EXACTLY like our Todd shows up, and ships our Todd off to a parallel universe.

This speculative fiction doesn’t play that hard and heavy with the science aspect. What it does do is in a somewhat humorous way is making this a character study. What would a person do if he or she were suddenly deposited in another universe where his or her life is different, and not for the better? This movie would never play well in the big box office arena of today’s cinema, which is a shame because this was so much fun! The story was interesting and the acting performances from everyone were incredible, thus giving further validation that the independent industry is loaded with amazing talent and can sometimes put out better quality work than many major studios. 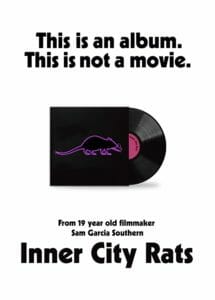 This movie doesn’t play like anything else we’ve ever seen. Even the posters say, “This is an album. This is not a movie.”

Set in one of the burrows of New York City the movie plays like an anthology with a variety of vignettes that each have their own characters that they focus on. As each scene ends it gets handed off to another character where we are shown the next character’s travails. Many of these characters are not nice, but the common thread is they all appear to be a product of the one connecting element, that being NYC.

The performances in this movie were all incredibly strong, but special props must be made to the two main characters in Track 3. These guys are just a couple of trashed con men who are only looking for the quick score. They are morons, and that’s what makes this specific track so enjoyable. The performances each of them gave (Louis Rocky Bacigalupo and Len Nash) were nothing but sheer genius. It’s as if director Sam Garcia Southern just found himself some party with a lot of booze and drugs, turned on a camera and just filmed these two nut jobs. They were incredible!

There are a total of 6 tracks (with the sixth labeled as a bonus track) that help to paint this picture of life throughout New York City, most of it being depraved, but some of it actually rather nice.

This film was the biggest surprise for us. We bumped into Sam Garcia Southern during the Opening Night festivities and he mentioned his film to us, so we made the choice to see film that was outside of our wheelhouse, and we are glad that we did so! This was a fresh and unique look at filmmaking, which again tells us that there is some amazing talent out there!

Below is the Q & A with Director Sam Garcia Southern, and Actors Connor Dylan, and Allen Parker.

The Hole In The Ground 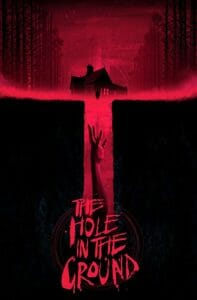 A woman, living in a forest area of Ireland, discovers a gigantic hole in the ground. After fearing her son may have fallen into that hole she suddenly discovers him apparently safe and sound, but as time goes on she starts to feel that this is not her son after all.

Coming from Lee Cronin who gave us the amazing horror short film Ghost Train several years ago, this movie plays on atmosphere using very effective dark lighting and some excellent POV work that also helps to build on claustrophobia. The performances of Seána Kerslake as the mother Sarah, and James Quinn Markey as her son Chris, were incredibly intense and they delivered masterful jobs at giving us a movie that numerous times actually scared me! Director Cronin proves without a doubt that a good scary movie does not have to rely on jump-scare tactics, but with very measured reveals can create something that will stay with you even after you leave the theater.

I loved this movie. From the opening scene where he utilizes the same set as he did in Ghost Train, to its final moments with mirrors, this is one of the most intelligent horror films yet. Cronin understands horror. This movie did everything right, and while the concept of imposters is clearly not a new one, The Hole In The Ground is the movie that Jordan Peele SHOULD have made with Us.

Website: The Hole In The Ground – Official Movie Site

This futuristic sci-fi/horror tells of a time where Earth has been at war with another alien race, and as part of humanity’s attempt to survive is to send children into space where they will ultimately help colonize new worlds. However things go wrong, the children are stranded on an alien world, the elements are clearly against them, and one of the surviving adult security guards has gone insane and is trying to kill them.

This was the other surprise that I alluded to earlier, only this one was enormously disappointing. The movie had some very interesting elements to it, and the performances were amazing by the mostly young cast. What disturbed me was the blatant hunting and killing of children. There are some lines in the ground that I do not liked to see crossed, and this movie did it more than once. I found one of the deaths to be particularly horrifying, and not in a good way. The movie also introduced very early a “McGuffin” that does make its way back towards the ending, but nothing ever comes of it. Classic writing says, “If in the first act you have hung a pistol on the wall, then in the following one it should be fired. Otherwise don’t put it there.” Had this just been a sci-fi/horror about trying to survive on an alien world then the ending of this movie might have worked, but by introducing this McGuffin the entire focus of the movie is now shifted. Now there needs to be some sort of payoff, yet there isn’t. The lack of resolution would work without the McGuffin, but the presence of one turned this into a very disappointing movie.

All in all, it was a very enjoyable Day 1 at the festival, and one great element is the opportunity to meet filmmakers (they’re easy to pick out with their badges). That is how we had the pleasure of meeting Sam Garcia Southern, and briefly discuss with him about his Inner City Rats. We also had the enormous joy of meeting another filmmaker named Sam Kryszek who was happy to share that his film would be appearing in one of the Sci-Fi Short Blocks and is called The Way the Future Was. Unfortunately he had little time available so there was no great opportunity to sit down and do an impromptu interview with him, but it was fun being able to chat with him briefly in between films about what sci-fi movies and TV shows he’s passionate about, and even asked us if we liked Star Trek. How cute. Nevertheless, Day 1 was about seeing some amazing independent work, and having the opportunity to meet some equally amazing independent filmmakers.

I can’t emphasize how wonderful it is to go to a festival like this. You’ll never know what or who you will see. You might even catch a glimpse of Edward James Olmos walking next to you with a bag of popcorn!