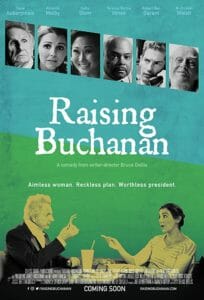 As part of our coverage of the Phoenix Film Festival I’m taking a look at the independent feature length film Raising Buchanan, which is part of the “Arizona Films” block at the festival.

Ruth Kiesling is a single woman whose life isn’t what she had hoped for. Born with some good potential, a couple of bad choices has altered the trajectory of her life to where she finds herself up to her eyeballs in debt, has committed some minor crimes and has demonstrated anger management issues. However, she believes she has found an opportunity to right her ship when she learns that the bodily remains of the late President James Buchanan is passing through Arizona (where she lives). She plots a scheme where she will steal the remains and then ransom him in order to raise the money she needs to clear out all of her debts. Unfortunately things don’t go as planned. As she tries to negotiate terms for Buchanan’s remains to be returned she comes to realize that he’s viewed as one of the worst Presidents in US history. Even as she continually re-negotiates the ransom amount she is dismayed to learn that no one wants him. In other words, Buchanan’s remains have been stolen by K-Mart. And if that wasn’t unusual enough, she is now having conversations with the late President as well as if he were right in front of her.

We here at TG2Studios learned of this movie through the Phoenix Film Festival and given that it was filmed here in Arizona, not to mention making its world premiere at the festival, this was a movie that we definitely wanted to cover. To start things off, one commonality in most independent films is how they are shot and edited. I was incredibly impressed to see how brilliantly put together this movie is. For an independent film, it has all of the earmarks of being put shot and edited by a big name from a major studio. The magic doesn’t stop there. Writer/director Bruce Dellis has managed to find authentic voices for each of his characters that makes them both believable and individualized. While it’s relatively easy for modern day characters to have contemporary dialogue written for them, each of the modern day characters in this film are strikingly unique, and those voices remains consistent throughout the entire film. Then there is the voice of Buchanan. Listening to the dialogue that would take place between the deceased President and Ruth was ridiculously fascinating. The overall narrative of this story doesn’t seem to suggest that Ruth is being visited by Buchanan’s ghost because no one ever notices Ruth talking to thin air. There are a number of theories that might be used to describe what is going on with Ruth and her visitations by Buchanan, but it is best to leave that unanswered and for each viewer to arrive at his or her own conclusions. What is of interest is the dialogue itself. While Ruth speaks in a manner that almost anyone can hear just walking down the street today, Buchanan’s manner of speech clearly shows him to be a man out of time, further adding mystery as to the nature of his communications with Ruth. What is clear is that their dialogue does provide contextual resolution to Ruth’s situation, making her chats with Buchanan all the more interesting.

The cast in this movie is quite strong, giving further evidence that many people who work solely in the independent film market have just as much talent as those that find regular work from big studios. However, Raising Buchanan pulls a bit of coup by employing the talents of some serious actors. Starting with Terence Bernie Hines, this immediately recognizable actor and filmmaker has an extensive resumé with TV shows giving him a very broad background of acting experiences to draw upon in bringing his character of Philip Crosby to life. Then there is M. Emmet Walsh who plays Ruth’s ailing father, Larry. This actor has one of the most incredible list of credits to his name, not to mention having acted in movies that have won the Oscar for Best Picture. As Larry, he is beautifully cast as a father who is slightly crusty, but shows his enormously tender heart towards his daughter, even when he knows that she isn’t being entirely honest with him. 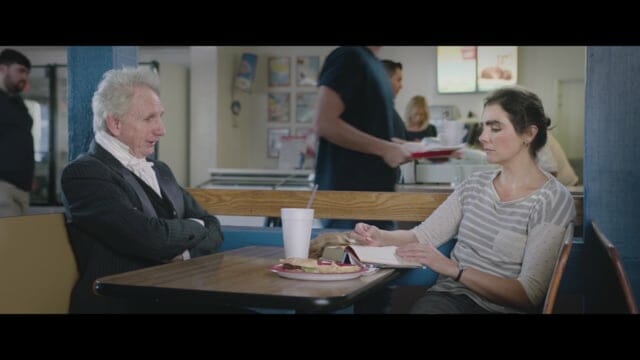 Playing the title role of James Buchanan is the always magnificent and award winning actor Rene Auberjonois. This actor has an amazing chameleon like talent with the variety of roles he has played throughout his career, and his commitment to this part is no less dedicated. His command of the part is extremely impressive because his lines aren’t what many might consider to be “conversational,” which once again stems from his character being a man out of time. And yet, Auberjonois delivered those lines with such enormous integrity that he came off as almost Presidential. At the very least, I could believe that I was listening to the words of a man from an earlier century. Lastly there is Amanda Melby. Despite the fact that she has worked in largely independent projects, her talent and skill as an actress is unquestionable. Ruth is the one character with the greatest arc throughout this movie. Starting from a position of complete desperation, and then arriving at a moment of peaceful acceptance and responsibility, Melby never takes shortcuts in her character’s development, which can be a very difficult thing to do given how most films have their scenes filmed out of order to better facilitate the needs of the production. Melby knows exactly where Ruth is on her journey, and each scene is not only played precisely on target with that place on the journey, but it is acted with all the perfect subtleties and nuances that make Ruth a completely believable, if not somewhat loony, character.

Writer/director Dellis has managed to craft an enormously clever comedy, that had the risk of going of the rails and becoming madcap, but instead through the timely written dialogue between Ruth and Buchanan it oddly enough helps keep the movie grounded, which is also a testament to the quality of Dellis’ directing as well as the outstanding acting between Rene Auberjonois and Amanda Melby. This is a movie that I cannot find any flaw with, and based on the audience’s reactions at the Phoenix Film Festival, it’s safe to say that they would agree.

For being extremely funny, and incredibly original, Raising Buchanan receives 5 out of 5 stars!!

Raising Buchanan is having its final showing today at the Phoenix Film Festival at 4:20 PM at the Harkins 101 Theater.