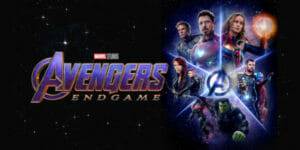 What do you do when people you have known are suddenly taken from you? What do you do if you find yourself marooned? These are the two questions that are asked either literally or figuratively, in the latest of the Marvel movies, Avengers: Endgame.

Picking up where Avengers: Infinity War leaves off it wastes no time in jumping into the action suggesting that this is to be a story driven, or action driven, movie. Then after taking some surprising directions the tone shifts into something entirely different. It becomes a survival movie where we see some people acting as if they were marooned (from the trailers it shows that Tony Stark is quite literally marooned in space) because of their inability to move on. Those that do learn to move on do so with a continual void in their own being and they find themselves going through the motions. To some degree even they can’t move on and instead are faking it in the hope that they can eventually make it.

Looking at the chief remaining Avengers we see what this type of loss has enacted on them. They try to move on, but find that they can’t. In the case of one specific Avenger, his loss drives him to desperation where he almost becomes someone entirely different. This is the psychological study that writers Christopher Markus and Stephen McFeely give to the audience with this latest movie, and along with directors Anthony and Joe Russo, show once more that one of the strengths of these Marvel movies is the ability to redefine and give the audience something new, and they use the remaining Avengers as the means to deliver that narrative. As much as Captain America: Winter Soldier is a political thriller, Avengers: Endgame is an intense look into loss on a grand scale. That isn’t to say that this film is completely dour as all Marvel movies must have their levity, and this one is no exception. Taking possibly a page from Thor: Ragnarok this movie offers up continual surprises with who gets the laughs, and while some characters have been well known for their comedic deliveries, this movie takes them into uncharted territories as a result of their failure against Thanos in Infinity War. This sets up something else that makes this movie the perfect capstone to the Marvel franchise up to this moment, and that is the character journeys that each of them are on. Focusing on the original 6 members that made up the Avengers we see how their choices, both past and present, are shaping who they are in coming together to try to set things right. That also spills over to some of the supporting characters that have not been dusted by the snap of Thanos, as some of them have become vital to trying to restore all that has been taken. But for the original 6, just because they are heroes does not mean that this will be smooth sailing for them, and that’s one of this movie’s greatest strengths. We are shown what makes a true hero. Is it the tech? Is it the magic axe? Is it the super serum? No, it is the heart within of each of these characters, and the Russo brothers have perfectly directed this cast to find that special characteristic within each of them that will convince the audience that they truly are heroes, and that they are on the ultimate hero’s journey.

Given that this movie is the final entry for this particular phase of the MCU, the spotlight does rest on the original 6 members, and each one of the cast has his special moment of reckoning. The three most notable in this group would be Robert Downey Jr., Chris Evans, and Chris Hemsworth. Each character has his own baggage, yet each actor throws down with something entirely unique that adds to this marvelous tapestry that has been at the heart of this cinematic universe. From tragedy to comedy, they show us something that at the end of the day can only be considered mythological in stature, and each of them sees the journey they have been on since their first introductions come to some type of satisfying, if not bittersweet, ending. Then there are the callbacks to past movies that each of these characters must face, and they are plentiful. At one point the only thing that I could think of was “Marvel’s Greatest Hits,” and this is a very dangerous road to go down because the last thing this movie needs to become is the equivalent of a “clip-show.” However, writers Markus and McFeely cleverly find a way to integrate these callbacks in a manner that, instead of rehashing old territory, sheds new light and perspective on details that these characters have already gone through. While some might balk at fiddling with the continuity of this franchise, the fact remains that this is largely character driven making any such complaints relatively moot.

It should be pointed out that despite being a character driven movie, the third act of Endgame is what draws many Marvel fans to the seats of theaters, and that is the action. Marvel movies have done a bang-up job in giving action sequences that find fans sitting on the edge of their seats, barely breathing over what is liable to happen next. Of course the big question is, could the Russo brothers deliver something bigger than what they gave us with Infinity War? The answer is a definitive YES! By the time the third act is finally unveiled the Russos give sequences that are both grand in scale and vision, and at the same time, extremely intimate. With one moment there is a callback to Age Of Ultron that had the audience cheering wildly, only to be followed by something so unbelievably massive and rich in vision that people began to cheer and applaud through tears of joy. There are moments of incredible diversity that got a big thumbs up from me, and then there were other moments where all I could do was cheer loudly at what I was seeing. However, despite this being a character driven movie, the Russos don’t dial the action back. Instead they take that incredible action filled energy and bring it into a very intimate, and very focused character moment that left the audience in complete silence.

Then there is the epilogue. As epilogues go, this one is pretty lengthy, but very necessary. As the finale to act three brought one character’s journey into a full circle, this epilogue ties up the loose ends of another and brings a beautiful sense of much needed justice to this beloved hero. Throughout the epilogue the theater was filled with the sounds of cries and sniffles from the audience, signifying that once again, writers Markus and McFeely, along with the directing skills of the Russo brothers, know how to deliver a movie. It doesn’t matter if it’s a big movie or a small one, as this epilogue looks like it could have come from some independent dramatic film. It’s as if they were channeling the spirit of David Bowie in saying, “for we can be heroes just for one day.”

Avengers: Endgame has become, without question, the finest movie of the superhero genre to ever come along. From a purely analytical standpoint this movie is without peer. People were concerned with the first Avengers if such a film with such distinct and established characters could work together, and Marvel Studios showed us that they could. Now Marvel has upped their game and presented audiences with a movie that has the largest cast I have ever seen; yet none are shortchanged. It is sublime. It is delicate. It will have you cheering. It will leave you crying. In its achievement Avengers: Endgame is heroic. For this genre it is perfection.

Avengers: Endgame receives 5 out of 5 stars.