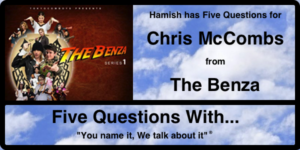 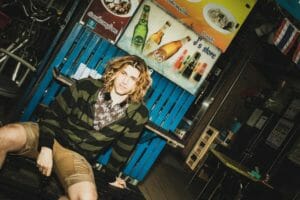 TGG: Today, we have the beauty and the brains behind the Japanese web series I’ve been featuring on “News Sushi” – “Till Death” and “The Wheel” as well as the short “The Actor and the Model” … but, for those who don’t know you… can you please introduce yourself?

CM: Brains and beauty! That’s quite the introduction! Thank you so much. To begin with, my name is Chris and I have been working as an actor for 23 years and a model for 22. I came to Japan about 10 years ago with the intention of modelling here for a few months and heading back. I landed a regular role on a television show and I’ve been here ever since. Currently I have shows on TV Asahi, NHK, and NHK ETele.

TGG: And now you have a new series, “The Benza”, the first two episodes of which are available on Amazon Prime in Japan, the UK and the US. Can you tell us what it’s all about and what inspired you to make it?

CM: The Benza started as a comedy short film. I really felt a bit drained after the heavy social message of “The Actor and the Model” and wanted to make something a bit lighter. At the same time, I was feeling like something was missing from the way foreign talent was being used in Japanese television. I wanted to introduce some new scenarios where we could all be in on the laugh instead of feeling like we were being laughed at.

We had a lot of success with The Benza at film festivals and won many awards. After a festival in Korea we were approached by an on-demand service with an offer to turn the short into an on-demand television series. We had such a great time making the short that it wasn’t difficult to get everyone together again!

The Benza starts off with two guys, Chris and Kyle (Kyle Card), trying to figure out where to buy a toilet seat to replace their broken one. By the end of episode six, they are integral to preventing the end of the world and completely caught up in an insane adventure!

Our supporting cast is absolutely brilliant. Janni Olsson (who is mainly known as a reporter on NHK World) really did something amazing with her character Alena. Swim suit model turned actress Haku Inko also plays a brilliant villain as the whip wielding Inko Sensei. However I think actress Michiko Noguchi steals the show as the prophet who can only see what won’t happen Za.


TGG: Tell us more about “Tokyo Cowboys” – how did it come about, and where did you find everyone?

CM: Tokyo Cowboys began about 4 and a half years ago. I really wanted to create a more positive environment that Japanese and foreign entertainers could come together and be on even ground. We primarily make short form and serialized content. After four years we have a wide range of performers and staff, so we tackle all kinds of genres with our work.

We are a volunteer team, but we are as professional as can be and are always looking for new members! Every time I’m on a set or at a show I’m always paying attention and looking for something with a special spark. I found Masahito Kawahata (who plays Tamura in The Benza) at an improv comedy show! He was so funny that I approached him immediately. You really never know where someone is going to inspire you!

TGG: Did you know that Maria was going to be a breakout star?

CM: Maria Papadopoulou is such a force and there really is no one else in the world like her. I love writing for her and I have a brilliant part for her in mind if we can make a second series of The Benza. For the moment she is in the first episode with a bit of a hint as to the character she would be playing.

TGG: You and I have featured on the same travel show, “J-Trip Plan”… what can you tell us about your experiences hustling and being an actor and model in Japan?

CM: Japan is a market that is unlike any other. There are no unions protecting the talent or the staff which makes shooting conditions very difficult at times. I think my largest problem here is that I have the ability to compare working conditions back in the States to the conditions in Tokyo! I have my lines drawn and if it means I get labeled “difficult” but get water on set, so be it.

Having said that, there is a lot of camaraderie to be found here in Tokyo and it’s not as cut throat as some of the other markets that I work in. I like the team work here and that’s the most important aspect of Tokyo Cowboys. We are a team.

Please check out The Benza on Amazon Prime and if you like it leave a positive review.

Sharing it on social medial also helps a lot! We are currently available in Japan, US, and UK and will be releasing in additional countries through out the year. Get the latest news on our homepage: 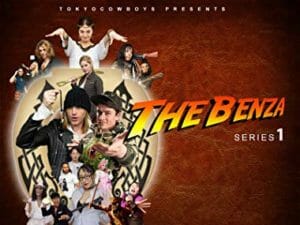 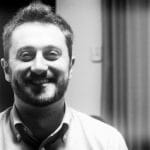