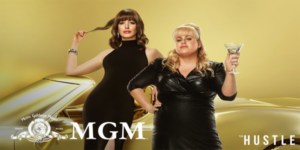 When it comes to playing a con or hustling someone, men have notoriously been identified as the best con artists around. But what if it turns out that women are superior when it comes to the art of the hustle?

Josephine Chesterfield is returning to her home in Beaumont-sur-Mer after having successfully stolen a diamond bracelet from a gentleman she met. While on the train she witnesses a truly pathetic con attempt by another woman, Penny Rust, who uses her ability to hustle another gentleman only to get a free meal. Josephine tries to get Penny to settle anywhere but where she lives, which is easier said than done when Penny, believing Josephine to being one of the greatest con artists of all time named “Medusa,” decides that she wants a piece of the rich lifestyle that Josephine has. Thus begins Penny’s education into the proper art of the con, but when things get competitive between them they make a wager regarding an inept looking man, who happens to be nerdy tech millionaire Thomas Westerberg. Whoever wins the wager must leave Beaumont-sur-Mer for good.

Did any of this synopsis sound even the slightest bit familiar? If so it is because this movie is adapted from the 1988 comedy Dirty Rotten Scoundrels starring Michael Caine and Steve Martin, where Caine was the dashing, experienced con artist and Martin was a simple street hustler who turns to Caine for guidance. There is no pretense that The Hustle is adapted from the 1988 movie. In fact, at times it’s practically unapologetic with its storyline. With this movie I was able to predict with over 98% accuracy where the story was headed. Now this might seem to make for a rather unoriginal movie as well as disappointing movie watching experience, and perhaps in terms of the story itself that would be the case. But part of what lifts this movie is the gender swap. Where the first movie had Caine and Martin, this time the experienced con artist Josephine Chesterfield is played by Oscar winner Anne Hathaway, and the crude and more than just rough around the edges Penny Rust is played by Rebel Wilson. The casting of these two is absolutely perfect. Hathaway has always had a very statuesque and elegant quality, and this movie allows her to play those characteristics to the hilt. On the other hand, Wilson and her talent for almost crude physical comedy makes her the perfect foil for Hathaway. Here is where another slight deviation occurs from the original movie, and those are the gags. Some of the jokes are gender specific, while others are simply created to play to the strengths of Hathaway’s and Wilson’s talents. In fact, one such gag involving a chip (french fry) was so over the top that the audience was quite literally screaming with laughter. I seldom laugh THAT hard at movies, but this joke became absolutely brilliant because of Hathaway and Wilson. Had anyone else tried this gag it might have then failed, but because of these two ladies the joke was one of the most hysterically funny bits I have seen in many years.

If there is a downside to this movie it is again that it’s practically beat for beat identical to Dirty Rotten Scoundrels in terms of the plot. While the jokes may have been unique, the plot itself was not. This created a situation for me where I didn’t find myself surprised by where this was going. I would have enjoyed being able to watch all of the movie with fresh eyes, but given that I could see how virtually identical these two movies were that any of the twists presented came as no surprise to me at all. The only twist that was original came at the very end of the movie before the closing credits, which did leave me with a modest sense of satisfaction and enjoyment. What ultimately did save this movie for me were the specially tailored jokes delivered and acted by Hathaway and Wilson. Those two, plus the lovable portrayal of “the mark” Thomas Westerberg by Tony Award winner Alex Sharp, did make this movie fun to watch, despite the story essentially being nothing more than “paint by numbers.”

Because of a lack of an original story, but with an amazing cast and brilliantly executed jokes, I give The Hustle 3.5 out of 5 Diamond Rings.