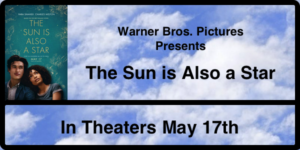 The Two Gay Geeks received an update on this film form EPK.TV.

The Sun is Also a Star is released by Warner Bros. Pictures and Metro Goldwyn Mayer Pictures.

Let us know what you think of the trailer and if you plan to see this touching film. As always, we welcome your feedback on all of our content. You may leave comments int he section below the article. 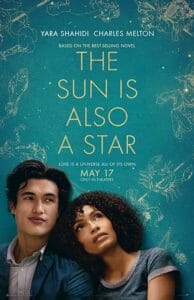 The Sun is Also a Star

Natasha is a girl who believes in science and facts. Not fate. Not destiny. Or dreams that will never come true. She is not the type of girl who meets a cute boy on a crowded New York City street and falls in love with him. Not when her family is twelve hours away from being deported. Falling in love with him will not be her story. Daniel has always been the good son, the good student, living up to his parents’ high expectations. Never a poet. Or a dreamer. But when he sees her, he forgets all that. Something about Natasha makes him think that fate has something much more extraordinary in store – for both of them. Every moment has brought them to this single moment. A million futures lie before them. Which one will come true?

Based on the novel by
NICOLA YOON


We welcome your comments and feedback below. If this is your first visit, be sure to read the Privacy / Terms and Conditions Of Use. And Please, Play Nice.